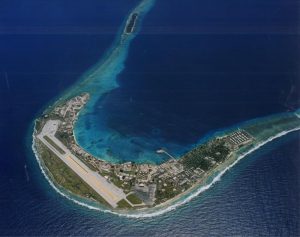 The U.S. fired an intercontinental ballistic missile at Kwajalein Atoll in the Republic of the Marshall Islands.

Vandenberg–The U.S. tested a Minuteman III intercontinental ballistic missile carrying a mock nuclear warhead early Monday morning at 1:23 AM (PDT). from Vandenberg Air Force Base. The U.S. typically conducts three to four ICBM tests each year. Monday’s test comes less than a month prior to the high-stakes summit between the U.S. and North Korea that is aimed at denuclearizing the Korean Peninsula.

What kind of message is the U.S. sending to North Korea with this latest launch when these are the same class of missiles for which the U.S. has been highly critical of the North Koreans for developing and testing?

David Krieger, President of the Nuclear Age Peace Foundation, commented, ”When it comes to ballistic missile tests, the U.S. continues to operate on a hypocritical double standard. Its own missile tests and those of its allies are treated as necessary and business-as-usual, while the missile tests of non-allied countries are treated as provocative and dangerous. What the world needs is a single standard aimed at ending the nuclear arms race and achieving a world free of nuclear weapons.  It also needs U.S. leadership rather than U.S. hypocrisy.”

One month ago, Kim Jong-un suspended nuclear and missile tests in North Korea and stated that he will shut down the site where the previous six nuclear tests had been conducted. One cannot help but view this as a sign of good faith on the part of North Korea heading into the negotiations with the United States. As its own sign of good faith, the U.S. should also cancel all its planned ballistic missile tests prior to its summit meeting with North Korea.

If you would like to interview David Krieger, President of the Nuclear Age Peace Foundation or Rick Wayman, Director of Programs and Operations, please call the Foundation at (805) 965-3443.

Stay up to date with our issues, sign up today