Strategic Thought: Lee Butler on Nuclear Policies, Past and Present

On why nations amass nuclear arsenals:

It’s almost a testosterone-driven calculation: “At what point am I still the biggest guy on the block?” One of the terrible things that happened in the Nuclear Age was the possession of nuclear weapons became a validation of national manhood. That sent a terrible message. It makes you “count” more amongst your national brethren.

You can marshal all the arguments in the world with respect to effects on the climate, number of people killed [due to ecological damage], etc. But none of that is going to make a dent in the fact that nations like India and Pakistan view their nuclear arsenals as measures of their manhood, pure and simple. That’s what, in their eyes, gave them international stature. That’s what, in their eyes, commanded respect. Quite frankly, they don’t [care] about the consequences of these weapons. The most insidious part is, given the fact that they live side-by-side and they have no warning time, they are almost driven to a posture of pre-emptive strike. And the targets for their relatively imprecise weapons are cities. The worst possible situation.

Maybe someday there will be leaders of those two nations who say, “What in the world have we done?” I said to India’s nuclear-weapons community in Bangalore, “The first thing that happened when you became a nuclear-capable state is that you became a nuclear target. How did that increase your security?” I didn’t get an answer for that.

President Obama himself is quite extraordinary [as a proponent of nuclear abolition]. He was studying these questions as a college student. He came to the conclusion, a very long time ago, as to precisely what we’ve been talking about—that nuclear weapons, as a practical matter, are an unacceptable form of warfare. So he was predisposed to make further reductions, which he’s done. New START was quite an achievement. I think that’s as much as could have been done at that point, given that he’s not a unilateral actor.

Does the fact that China is a nuclear-weapons-capable nation pose a threat to the vital interests of the United States? Only if we regard them as an enemy. Britain has nuclear weapons. France has nuclear weapons. Do we view them as threats? No. We have a long history of amicable relations. So, no, I don’t view China as a threat to our survival. Is there any element of our relationship that could conceivably lead to some sort of nuclear exchange?

A lot of people would disagree. They’d say, look what they’re doing—they’re modernizing their military forces. Look what they’re doing in the fishing grounds of the South China Sea and elsewhere. As a very long stretch, there’s the question of Taiwan. It’s always been the thorn in the side [of our relationship]. But I think any nation in this world today is far more constrained in their actions than they were a half century ago, when might always could make right and if you wanted to go seize something, you just went and did it. Today I think that for whatever quarrels we might have with China, there’s a far greater likelihood that they can be settled in other courts of arbitration than to imagine we might somehow end up in nuclear war.

I would [want to] know exactly what their nuclear capabilities were, what kind of forces they have, where they were based. But that’s a different matter from considering them an enemy. 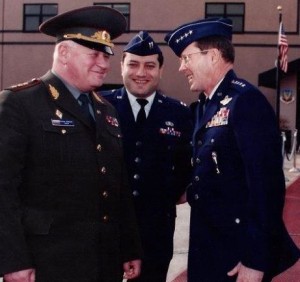 In 1993, the Cold War had thawed and Butler (far right) hosted a delegation of top Russian military officers at his U.S. Strategic Command headquarters near Omaha.

I watched the convoluted history of “Star Wars” evolve from the very beginning, when President Reagan became enamored with Edward Teller’s brainchild. Here we were, embarked on an enterprise that was entirely open-ended in terms of cost and aspiration, and for which I had the unfortunate task of developing some sort of military objective that made sense. It became very apparent that this was nothing more than the quintessential, cosmic, technological hot biscuit popping out of the oven that captured the fancy of the leader of the free world. And all of a sudden, we’re off and running with really no clear path, and hundreds of billions of dollars at stake. I came to the conclusion that it was a pipedream from the very beginning. There was no way we could ever erect a leak-proof antiballistic missile system for the United States.

It also was counterproductive from the standpoint of what it said to our allies: “Well, we’re OK, so good luck.” If we were really serious about protecting the coalition nations that subscribed to us as their protector, we would have imagined this on a global scale. [Yet] it was hard enough to do it on a national scale, and it ultimately proved undoable. But in the process, we alienated Russia once more, at a time when more than anything else we needed to be cultivating relations at the end of the Cold War.

We just sort of continually jabbed our finger in their eye, and at the end of the day it cost us the ABM [Anti-Ballistic Missile] Treaty and the expenditure of a lot more money. I guess what we have to show for that is a very limited capability against a very small-scale, prospective missile attack from a North Korea, for example. It gives a measure of comfort to think, I guess: Kim Jong-un might just wake up one day and decide to kick one off to Hawaii or wherever he’ll be able to reach—maybe the shores of some outer Alaskan island? And that we might have some prospect of shooting it down? I view that as highly unlikely.

[Russian leaders] see it as a threat. Their principle force is their land-based missile force. It always has been. For us to proceed with a system that…appeared to threaten them, from their viewpoint was one more thing that said we’re not serious about having a good relationship.

On missteps by the U.S. after the Cold War:

The first thing I would have done would have been to begin standing down NATO—wean European nations off of U.S. largesse and have them begin to take responsibility for their own national security. The Warsaw Pact dissolved. The failure to dismantle the alliances of the Cold War was a huge mistake. I smile when I hear people today say, “Well, thank God we’ve got NATO, because we’ve got Putin.” I think we got Putin because we didn’t dismantle NATO, along with the whole attitude that we adopted with regard to Russia: kind of “kick ’em while they’re down.”

There may be a so-called “fog of war,” but there’s a fog of peace, as well, where you still can’t see with any clarity exactly who you’re dealing with, and the belief systems that have built up on both sides, and how impenetrable the mythology has become. [Our post-Cold War posture toward Russia] was an enormous strategic blunder. We’re still paying the price for it.

I expect more of our senior leaders. I expect them to see the larger picture, and play for the longer game. The longer game was establishing sound, cordial relationships with Russia to shepherd them into the realm of democratic government. Instead, the whole thing just went off the rails. In the process, arms control got lost. I was just horrified by all that, and really dismayed. The loss of momentum in nuclear arms control was the greatest price. You only have a short period of time to capitalize on those kinds of opportunities. The door closes.