General Lee Butler to Nuclear Abolition Movement: “Don’t Give Up”

When Lee Butler looks back at his anti-nuclear efforts of the mid- to late-’90s, he views himself as a “reluctant activist.” The former commander in chief of U.S. strategic nuclear forces never felt comfortable fully allying himself with longstanding organizations that had waged the fight for nuclear abolition for many years already. To do so, he feared, would tarnish his reputation with elite decision-makers—government officials and military leaders. He felt his particular value to the cause of disarmament was as an expert who’d have access to the corridors of power in many countries, not as a radical peacenik. So Butler’s relationship with abolition groups was never uncomplicated, though he consistently lauded them for their patience and dedication.

Butler discussed his views on how anti-nuclear organizations today can survive and exert influence in a world that often appears apathetic.

KAZEL: Do you think anti-nuclear groups can still achieve abolition?

BUTLER: If you are an optimist, with respect to the future of mankind, you have to believe that more opportunities will come, like Sisyphus moving that ball up the hill. Sometime, you’re going to get to the top and it’s going to roll down the other side, and the era of nuclear weapons will be over.

If you wanted me to pick a date for that, I would say a possible prospect, and a happy one, would be July of 2045—the 100th anniversary of the first test of an atom bomb in the deserts of New Mexico.

KAZEL: Because that date could become a goal for people?

BUTLER: It’s possible. It has significance. It’ll be a hundred years in the Atomic Age. It’s far enough out, that enough things could happen serendipitously to make that possible.

KAZEL: Total nuclear disarmament by all nations by then?

BUTLER: Yes. What that requires, however, is for people to continue to stay focused, work very hard at it, keep advising sensible and acceptable alternatives that can be embraced by increasing numbers of people as opportunities present themselves—and they will.

The Nuclear Age Peace Foundation and Global Zero, Bruce Blair’s organization, are vital, because they have to continue public education and awareness. 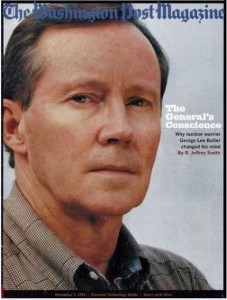 The former general’s metamorphosis into an anti-nuclear activist was featured on the cover of Washington Post Magazine in December 1997.

KAZEL: Can nuclear-abolition activists influence the views of military and political leaders today?

[Among the public] there is one group that is simply not interested in the subject, and will not be. There’s a second group that is already interested and committed, and you would be wasting your time preaching to the choir. It’s a third group, the unaware, who have simply never thought about these matters. It’s just never gotten on their radar screen. That’s the vast majority of the people in the world. The challenge for [anti-nuclear groups] is to frame a message that captures their attention and gets them to think.

I’ve talked to audiences ranging from sixth graders to corporate titans. I know what captures their attention immediately: the dimensions, the anecdotes, the histories drawn from the whole Cold War that get the response, “That’s utterly dismaying.” The $6 trillion that was spent on nuclear weapons alone in the Cold War. The number of warheads that were fabricated. You can count on very few fingers and toes the number of people in the world who actually understand how extraordinarily dangerous these weapons are, and how we lived on the brink of nuclear warfare in the Cold War years.

KAZEL: What would you tell nuclear abolition proponents of today, who might be discouraged?

BUTLER: You have to cling to the belief of what I call the “small weights in the pan” theory of opinion change. The scales of the blindfolded [Lady] Justice, right? It is still possible to imagine that those scales are now profoundly tipped on the side of nuclear deterrence. But I don’t see that as one enormous block, I see it a mountain of many small blocks of individual opinions. You just want to move those weights, one at a time, from one pan to the other. At some juncture, you reach a tipping point and opinion begins to shift more in favor of elimination.

That’s a long, hard process, but it has happened time and again throughout history. I’ve seen enormous changes in public morality, in societal values, happen in my lifetime. People just need to understand it’s hard.

These groups need to work in concert to develop a global strategic plan, if they’re going to maximize their resources. They need to be in league with one another.

KAZEL: You depict any use of nuclear weapons as a grave violation of morality. How can religious leaders help the cause of abolition?

BUTLER: What can be done, should be done, must be done is for a collective of organizations, like the World Council of Churches, to take their message to their flocks on a worldwide basis: a very bold statement with regard to the moral imperative [of abolition]. And these churchmen are long overdue, in my estimation.

KAZEL: Where would religious leaders get the script?

BUTLER: I’d be happy to write it for them. Read my book. [Laughs]. Read my speeches. I’ve said it hundreds of times.

KAZEL: Lawrence S. Wittner, a retired professor who has written on antiwar movements, says nuclear abolition groups can be stronger if they reach out to partner with other kinds of organizations—medical, scientific, environmental, religious, anti-poverty, labor, professional. Do you agree?

BUTLER: It’s right on point. The IPPNW, the International Physicians for the Prevention of Nuclear War, is a very respected group with global reach who’ve done some groundbreaking work with regard to consequences of regional nuclear warfare and a case study on India and Pakistan. Get professional groups involved.

The climate change movement. You talk about climate change: It’s hard to imagine anything other than volcanoes that would pose a greater risk right now [than a nuclear exchange]. I would consider it a great misstep if [global warming activists] did not make some public statement about the climatological risks of nuclear weapons and be on record about their elimination. I mean, it’s right in their ballpark.

KAZEL: Can activists get the attention of the public these days? You write in your upcoming book that average people seem uninterested in, even largely unaware of, nuclear weapons—that they’re totally distracted by trivial news and the demands of consumerism.

BUTLER: People are self-absorbed. Social media has fueled the fires of worrying about what other people think, what they wear, what they eat, or what they’re doing at the moment. It is a ceaseless round of chatter—often inane things that have virtually no consequence. The lead singer leaves the boy band One Direction, and it becomes a worldwide tragedy. How do you generate that level of concern for nuclear weapons?

I’ve got six grandchildren that I can measure this against, and I watch how they spend their time: what they worry about, the subjects they discuss. [Laughs]. Wow. People can’t focus even on inane subjects for long. To me, the challenge has never been greater. How do you penetrate the cacophony of noise that surrounds everyday life?

BUTLER: They assume they all went away because the Cold War ended.

KAZEL: Do you see any positive side to technologies such as online social media?

BUTLER: We can see more and more on these global social networks people will respond with great compassion. The outpouring of monies to alleviate the suffering from hurricanes or tsunamis—that speaks volumes that there is a global well of empathy. For all of the social media that consumes us, some of the stories are very heart-touching with respect to how people respond so generously, often in the case of people they don’t know. That’s what ultimately is going to save us, not just from nuclear war but from wars of all kinds.

The world is, in fact, becoming much flatter. We’re connected in ways that were unimaginable just 10 years ago. Events are known worldwide in an instant, where people have developed a common set of emotional responses to tragic events.

Empathy to an important degree requires personal knowledge. It’s easier for us to empathize with people we know, who are suffering greatly, than complete strangers. When people reach the degree of personal interconnectedness where they say, “I know who they are; I’m not going to do [violence] to them”—I see great evidence of the possibilities.

There’s every chance that the bar of civilized behavior will be ratcheted upward. As it moves, I think there will be a greater focus on anomalies such as nuclear weapons, which threaten wholesale destruction.