The Hidden Legacy of the Runit Dome

As a third-year college student, I have struggled my way through enough United States history courses to know that our government has not always acted in the most benevolent of ways in the past, particularly when dealing with smaller, vulnerable countries. I have always liked to think that most of these transgressions, though unacceptable, are at the very least acknowledged by following generations of leadership, and reparations are paid or apologies extended to affected groups. Yet a recent episode of Australia’s ABC TV series Foreign Correspondent, titled “The Dome”, exposes the lasting effects of U.S. Cold War nuclear testing in the Marshall Islands, and puts a spotlight on our government’s decades of negligence and disregard for human and environmental well-being in the Pacific—all justified by the need for nuclear dominance.

The Marshall Islands, a scattering of over 1000 islands and islets halfway between Hawaii and Australia, was ground zero of U.S. nuclear testing after WW2— over 67 nuclear and thermo-nuclear weapons were detonated there between 1946-1958. The impacts of these tests on the Marshallese people remain tangible to this day: many were forced into permanent exile from their home islands, which remain uninhabitable due to high radiation levels, and elevated rates of cancer resulting from radioactive fallout continue to plague generations. The trauma from these experiences has been seared into the cultural memory of Marshallese society, and a sense of injustice persists through the generations. One of the episode’s poignant scenes shows schoolchildren singing together: “this is our land, gone are the days we live in fear, fear of bombs, guns, and nuclear [weapons]”. 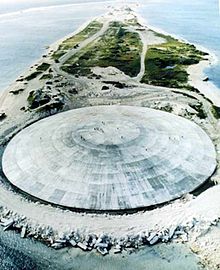 Yet decades after the end of U.S.-led nuclear tests in its backyard, the Marshall Islands remain threatened by the equally irresponsible and immoral actions of the world’s biggest superpower. The episode brings us to an island called Runit in the Enewetok atoll. On the island, tons upon tons of highly radioactive nuclear waste sit hidden away under a huge concrete dome. As the episode uncovers, in order to quickly and cheaply dispose of the highly radioactive waste material from its years of testing, the U.S. military dumped the toxic material (including hundreds of chunks of Plutonium) into a crater from a test explosion on the island, hastily covered it with a layer of concrete— and simply left. U.S. officials claimed that “the dome” would hold for a century or more.

Over the years, time and nature have caught up to what was meant to be a temporary solution to a permanent problem. Built at sea-level over the porous atoll floor, the dome cannot stop seawater seeping in from below with the rise and fall of the tide, leaking potentially radioactive material into the surrounding waters. An even greater threat, cracks and wear on the concrete from years of weather and seawater erosion place the dome at risk of being blown open by a bad storm or typhoon, which would result in a widespread dispersion of nuclear waste across the Pacific. This fact has been acknowledged even by the U.S. government in recent years.

Sadly, the Marshallese locals are not the only group to suffer from this negligence and mismanagement. The crew of U.S. soldiers who built the dome, told that they were finishing their deployments in a “tropical paradise”, were sent to Runit island without foreknowledge of the radioactive toxins on the island, or the nature of their mission. Working for months building the dome and filling it with the radioactive waste, they shockingly were not issued any manner of safety equipment. As a result, a large proportion of the crew have since developed medical complications such as cancers and reproductive issues, and many have died young. Yet the U.S. still refuses to acknowledge their maladies as resulting from radioactive exposure, and has provided no assistance in covering the staggering medical costs associated with treatment.

It is outrageous enough that generations of Marshallese people and an outfit of our own soldiers stationed there have had to suffer such injustices as forced relocation, medical complications due to radioactive exposure, and overt exploitation and silencing by the U.S. Yet the mess remains unaddressed, and the emerging Marshallese youth face even greater threats to their way of life. To them, the crater full of radioactive material is the least of their worries. Rising sea levels associated with climate change (caused largely by the negligence of the world’s wealthiest and most privileged nations, like the U.S.) may leave 75% of the islands inundated by 2100. This would decimate the local economy and wipe out a huge proportion of the country’s already limited agricultural land. It also greatly heightens the risk of widespread nuclear contamination occurring from leakage in the dome.

There is a telling lack of public knowledge and discourse around the U.S. legacy of nuclear testing in the Marshall Islands in the United States. The American media has had little to say about either the history or future consequences of the Runit Dome. It seems that as long as the dome is not in our own backyard, we don’t care where it is or who it effects. To the Marshallese, it represents the connection between the Nuclear Age and the Climate Change Age, and puts on full display one of the biggest culprits of both: American apathy. Most didn’t know, act, or care enough to stop nuclear testing in the Pacific during the Cold War, just as many of us don’t know, act, or care enough to halt the cascading effects of climate change today. We must heed the lesson of Runit Dome— a lesson of injustice, negligence, and complicity— and prevent our planet’s future from being doomed by the same indifference. We must stay informed about these issues and others like it, and together hold our government accountable for its actions, keeping in mind how they affect our precious planet and all of its people.