Testimony of a Hiroshima Survivor

I would like to thank the President for giving me the opportunity to speak.

My name is Fujimori Toshiki, and I am the Assistant Secretary General of Nihon Hidankyo, Japan Confederation of Atomic and Hydrogen Bomb Sufferers Organizations. I am one of the people who was exposed to the atomic bomb the U.S. forces dropped on Hiroshima on August 6, 1945.

Hibakusha established Nihon Hidankyo eleven years after the bombing. Since then, we have called for “No More Hibakusha” within Japan and abroad. The treaty you will be negotiating today must reflect this call of Hibakusha in express terms so that the world makes remarkable progress towards nuclear weapons abolition. 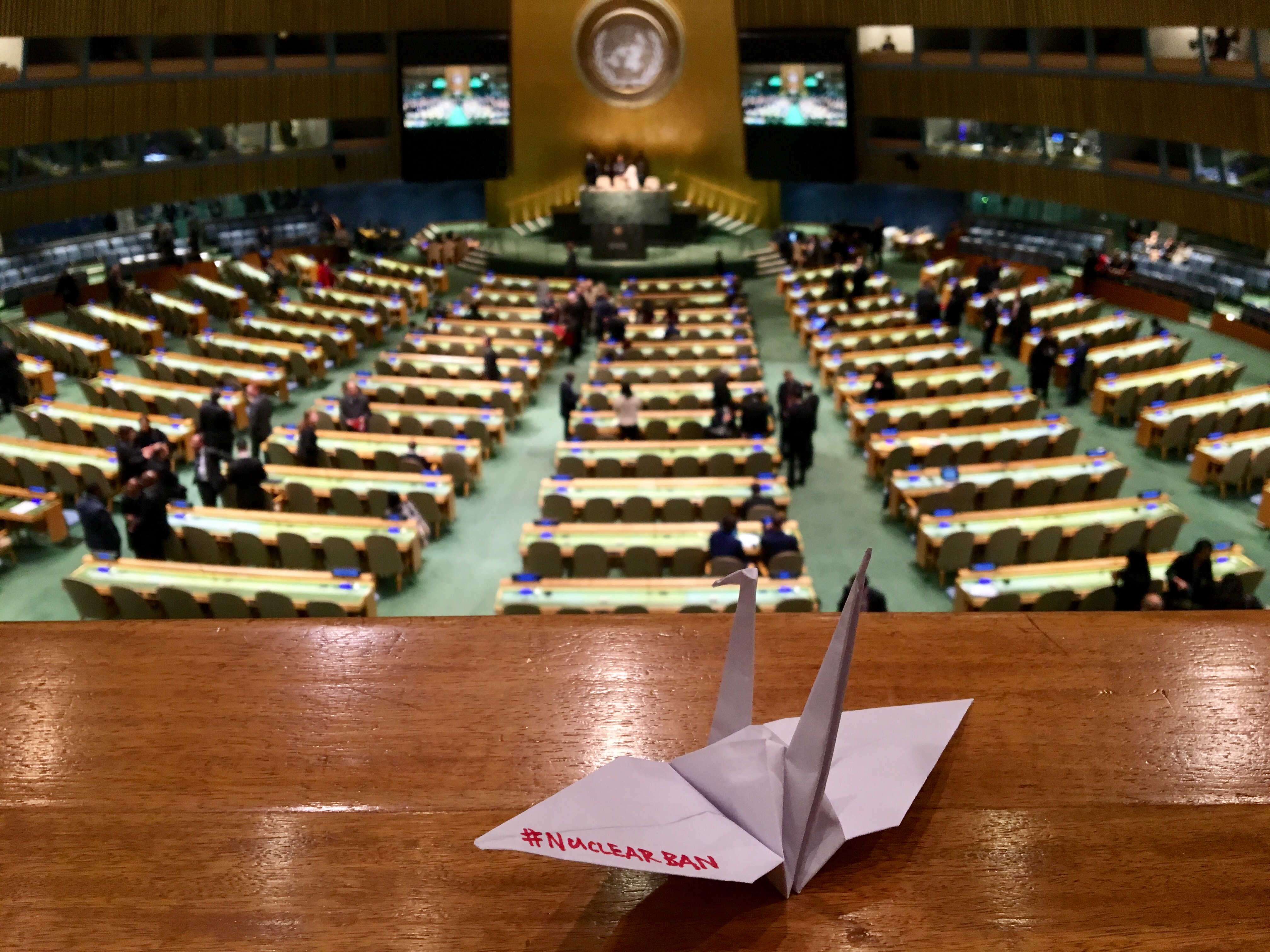 I was 1 year and 4 months-old when the bomb was dropped. We were a big family of twelve, consisting of my grandfather, father, mother, six elder sisters, two elder brothers, and myself. Two of my elder sisters and my two elder brothers had evacuated out of the city of Hiroshima to avoid air raids. The eight of us who stayed in Hiroshima were exposed to the bomb.

My fourth-eldest sister was 13 years old and was in her first year of an all-girls junior high school. She was around 400m from the hypocenter when the bomb was dropped. Together with her teachers and other students, my sister was there to demolish houses to create firesafe areas against air raids. All of 676 of them including my sister were killed instantly through direct exposure to radiation, the heat, and the blast from the bomb. It is said that all together in the city of Hiroshima, 8400 students in the first and second year of junior high schools were being mobilized for similar purposes that day. The lives of 6300 of them were lost.

I was sick that day, so my mother was heading to the hospital with me on her back when the bomb was dropped. We were 2.3 km from the hypocentre. Fortunately, a two-story house between the hypocentre and us prevented us from directly being exposed to the heat. Yet, we were thrown all the way to the edge of the river bank. My mother, with me in her arms, managed to get to the nearby mountain called Ushitayama. Our family members were in different locations at the time of the bombing, but everyone escaped to the same mountain of Ushitayama, except for my fourth-elder sister. For many days that followed, my parents and my sisters kept going back to the area near the hypocentre to look for my fourth-eldest sister, who was missing. We never found her. We never found her body either. In the meantime, I had my entire body covered with bandages, with only eyes, nose, and mouth uncovered. Everybody thought I would die over time. Yet, I survived. It is a miracle. I am here at the UN, asking for an abolition of nuclear weapons. I am convinced that this is a mission I am given as a survivor of the atomic-bomb.

Two hundred and ten thousand people died by the end of 1945 due to the atomic bombs the U.S. forces dropped on Hiroshima and Nagasaki. Hibakusha experienced hell on earth beneath the mushroom clouds. In fact, Hibakusha have continued to suffer for the twenty six thousand one hundred sixty six days until today, March 27th , 2017.

Nobody, in any country, deserves seeing the same hell on earth again.

Every year, on August 6th, my mother would gather all of us children and would talk to us about her experience in tears. I once asked my mother why she would speak about it if recalling the experience makes her suffer.

“I can’t make you go through the same experience.” That was her answer.

Her tears were her heartfelt appeal. She called, as a mother, for a world with no more hell on earth.

Three International Conferences on the Humanitarian Impact of Nuclear Weapons hosted by Norway, Mexico, and Austria, as well as the Joint Statements on the Humanitarian Consequences of Nuclear Weapons at the Preparatory Committee meetings for the NPT Review Conference and the First Committee of the UN General Assembly, repeatedly and strongly reaffirmed the following conclusions:

That whether intended or not intended, the effects of a nuclear weapon detonation are not constrained by national borders;

That no state or international body could address its immediate humanitarian emergency or long-term consequences;

That in the interest of the very survival of humanity nuclear weapons must never be used again; and

Many Hibakusha received these messages with thousands of thoughts about the long journey that they had come.

Nuclear weapon states and their allied nuclear-dependent states are against concluding a treaty to abolish nuclear weapons. Despite being the only country in the world that experienced the wartime use of nuclear weapons, the Japanese government voted against the UN resolution 71/258, which established this negotiating conference.

As a Hibakusha, and as a Japanese, I am here today heartbroken.

Yet, I am not discouraged.

In April of last year, Hibakusha initiated the International Signature Campaign, which calls on all state governments to conclude a treaty to ban and eliminate nuclear weapons. We reached out to countries across the world, and last October, we delivered our first batch of five hundred sixty thousand signatures to the Chair of the First Committee of the UN General Assembly. Today, we have over one million seven hundred twenty thousand signatures. We will continue the campaign until 2020, and we aim to collect hundreds of millions of signatures.

Let us work together to achieve the nuclear ban treaty.

Thank you very much for listening.