World March for Peace and Nonviolence

This speech was delivered to a rally during the World March for Peace and Nonviolence in Los Angeles, CA on December 2, 2009.

Great thanks to the marchers traveling the world for peace and nonviolence.  You bring us the gift of hope.  How special it is to see so many people gathered together joined in commitment to achieving a peaceful and nonviolent world.

In his speech committing 30,000 more American troops to the war in Afghanistan, President Obama spoke of seeking “a future in which those who kill innocents are isolated by those who stand up for peace and prosperity and human dignity.”  Unfortunately, he missed the point that his policy in Afghanistan, like the policies of the previous US administration in both Iraq and Afghanistan, will be one that continues to kill innocents, as well as sacrificing more of our own youth at the altar of war.  Those who stand up for peace, prosperity and human dignity are those who say No to war.  You cannot at the same time seek peace and wage war.  You cannot continue to kill innocents in war and uphold human dignity. 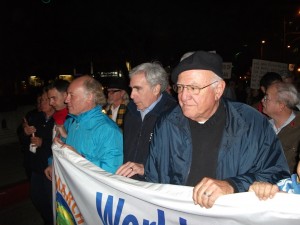 War is an organized way of slaughtering other human beings.   It is a means of justifying murder — a monstrous conception, unworthy of the human spirit.  Over time, war has become less discriminate and more lethal.  In World War I, about 40 percent of those killed were civilians.  The percentage of civilian deaths in World War II increased to two-thirds.  In post-WWII wars, the number has increased to over 90 percent civilians.

Improved technology allows mass killing to take place from greater distances.  Bomber pilots from 30,000 feet in the air can see only dim outlines of their targets.  The operators of missile-bearing drones sit in safe havens far from where the drones will do their damage.  With nuclear-armed missiles, you can press a button on one continent and murder millions of people on another continent.   The button pusher may not even know where the missile is aimed.

Militaries train soldiers to kill with small arms and bayonets.  They turn young soldiers into killers.  We traumatize and sacrifice our youth in war.  For those who survive, we scar their lives forever.  Of course, without conscription, we now only sacrifice the less advantaged youth.  It is the children of the poor who have become the mainstay of our military force.  As we dehumanize the enemy we dehumanize ourselves.

The countries of the world now spend some $1.5 trillion annually on their military forces.  Over 40 percent of this is spent by one country alone — the United States.   Only ten countries account for 74 percent of the total.  All but two of these, China and the Russian Federation, are US allies.

The Millennium Development Goals call for reducing poverty by cutting in half the number of people who live on less than $1 per day and who suffer from hunger; achieving universal education and eliminating gender disparity in education; promoting health by reducing by two-thirds the under five mortality rate, by three-quarters the maternal mortality rate, and reversing the spread of HIV/AIDS; and achieving environmental sustainability by halving the number of people without access to potable water and improving the lives of 100 million slum dwellers (out of the some one billion slum dwellers now existing on the planet).  All of this could be done for between five and ten percent of what the world spends annually on its militaries.

There are still over 20,000 nuclear weapons in the world, on average eight to 100 times more powerful than the atomic weapons that destroyed Hiroshima and Nagasaki.  In our hubris, we seem to believe that we can control this unnatural fire.  At least, many of our political and military leaders seem to believe this. The MAD in Mutually Assured Destruction has taken on a new meaning, Mutually Assured Delusions.

But let us have no delusion that nuclear weapons are safe or that they can protect us.  They are instrument of annihilation, portable incinerators, which undermine our humanity.  They go beyond suicide and genocide to omnicide, the destruction of all.

1. They are long-distance killing machines incapable of discriminating between soldiers and civilians, the aged and the newly born, or between men, women and children.   As such, they are instruments of dehumanization as well as annihilation.

2. They threaten the destruction of cities, countries and civilization; of all that is sacred, of all that is human, of all that exists.  Nuclear war could cause deadly climate change, putting human existence at risk.

3. They threaten to foreclose the future, negating our common responsibility to future generations.

4. They make cowards of their possessors, and in their use there can be no decency or honor.  This was recognized by most of the leading generals and admirals of World War II, including Dwight Eisenhower, Hap Arnold, and William Leahy.

5. They divide the world’s nations into nuclear “haves” and “have-nots,” bestowing false and unwarranted prestige and privilege on those that possess them.

6. They are a distortion of science and technology, siphoning off our scientific and technological resources and twisting our knowledge of nature to destructive purposes.

8. They waste our resources on the development of instruments of annihilation.  The United States alone has spent over $7.5 trillion on nuclear weapons and their delivery systems since the onset of the Nuclear Age.

9. They concentrate power in the hands of a small group of individuals and, in doing so, undermine democracy.

10. They are morally abhorrent, as recognized by virtually every religious organization, and their mere existence corrupts our humanity.

To end the nuclear weapons era, we need only vision, leadership and persistence.  The vision has always been present, from men like Albert Einstein, Bertrand Russell and Joseph Rotblat – the latter being the only scientist to leave the Manhattan Project as a matter of conscience and 50 years later being honored with the Nobel Peace Prize.  All of these men believed fervently that the advent of nuclear weapons made necessary not only the abolition of these weapons, but the abolition of war.

Now we have a president of the US who has called for a world free of nuclear weapons, only he doesn’t think it can happen within his lifetime.  We must convince him that there is urgency to eliminating these weapons.  In a world of human fallibility there are no foolproof systems.

The needed persistence must be not only that of leaders, but of all of us.  Persistence in seeking a nuclear weapons-free world is both a gift and a responsibility to ourselves and to future generations.  The overriding importance of the goal demands that people everywhere be awakened and empowered to end the false security, as well as the ignorance and apathy, which has surrounded nuclear weapons for far too long. Nuclear weapons and war must be made taboo, as incest, cannibalism and slavery have been made taboo.

You can help by taking three steps.

First, become engaged with this issue.  Visit the Nuclear Age Peace Foundation website at www.wagingpeace.org, and sign up as a member to receive our free monthly newsletter, The Sunflower.

Second, become active.  While you are at the website, you can also sign up for the Foundation’s Action Alert Network to receive timely suggestions of messages you can send to the President and your representatives in Congress.

Third, become a Peace Leader.  You can start on this by ordering our free DVD on “US Leadership for a Nuclear Weapons-Free World,” watching it and showing it to your friends and colleagues over the next year.

Let me conclude with a quotation and a poem.

The quotation is by Albert Camus, the great French writer and existentialist, and it was written immediately after the bombing of Hiroshima.  Camus wrote:

“Our technical civilization has just reached its greatest level of savagery. We will have to choose, in the more or less near future, between collective suicide and the intelligent use of our scientific conquests.  Before the terrifying prospects now available to humanity, we see even more clearly that peace is the only battle worth waging. This is no longer a prayer but a demand to be made by all peoples to their governments — a demand to choose definitively between hell and reason.”

The poem is from my book Today Is Not a Good Day for War.  It is entitled, “Hibakusha Do Not Just Happen.”  Hibakusha are survivors of the bombings of Hiroshima and Nagasaki.  They are growing older.  The youngest of the hibakusha, those in utero at the time of the bombing, are now in their mid-sixties.  The hibakusha have worked very diligently to assure that their past will not become our future.

HIBAKUSHA DO NOT JUST HAPPEN

We must end the silence, each of us.  That is why this World March is so important.  That is why our sustained commitment and persistent actions are needed.  Ending the silence is at the heart of what is needed to save our amazing, miraculous world, and pass it on intact to the next generation.  And at the heart of this effort is the abolition of nuclear weapons and of war, and the reallocation of resources to meeting the needs of social and environmental justice.