VANDENBERG AIR FORCE BASE – A test launch of an unarmed Minuteman III intercontinental ballistic missile (ICBM) is scheduled for Wednesday, April 26, between 12:01 a.m. and 6:01 a.m. from Vandenberg Air Force Base. The U.S. currently deploys some 400 Minuteman III ICBMs with nuclear warheads in silos spread across Colorado, Montana, North Dakota and Wyoming. 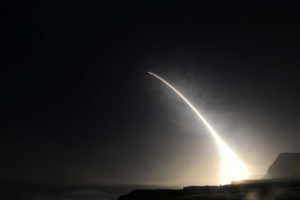 According to Air Force Global Strike Command, “The purpose of the ICBM test launch program is to validate and verify the effectiveness, readiness, and accuracy of the weapon system.”

The test comes at a time of extraordinary tension between the U.S. and North Korea, with each side flexing its military muscle and making implicit and explicit threats.

David Krieger, President of the Nuclear Age Peace Foundation, upon learning of the planned missile test, commented, “When it comes to missile testing, the U.S. is operating with a clear double standard: It views its own tests as justified and useful, while it views the tests of North Korea as threatening and destabilizing.” Krieger went on to note, “What is needed is diplomacy rather than military provocations. Threats, whether in the form of tweets, nuclear-capable aircraft carrier groups, or nuclear-capable missile launches, only increase the dangers to us all.”

If you would like to interview David Krieger or Rick Wayman, Director of Programs, please call the Foundation at (805) 965-3443.