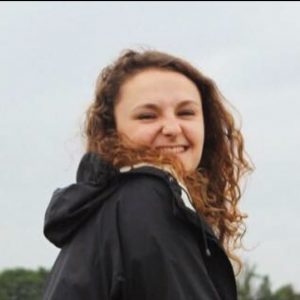 My name is Joy Ferguson. I’m a senior at Westmont College with a double major in Political Science and English. I hope one day to combine my two passions into a career in political communications, working on speechwriting and campaign strategy.

My interest in nuclear weapons goes back to my freshman year in high school when we read John Hershey’s Hiroshima for my Honors English class. The details Hersey included were so horribly eye opening, I still remember them to this day. I hadn’t yet been exposed to the realities of nuclear bombs beyond the image of a mushroom cloud and the way they were portrayed as evil weapons in action movies. At the time, we were being taught to believe the U.S. bombings of Hiroshima and Nagasaki were responsible for ending World War II and, therefore, using nuclear weapons was justified.

Later, as I studied U.S. history in college, I learned of the continued nuclear weapons testing conducted by the United States. I saw that our country was building bigger and more destructive bombs. And I learned further about the gruesome death and destruction the United States had wrought on the people of Japan.

Westmont has given me many opportunities, from studying abroad in England to meeting important influencers such as Bob Woodward and Doris Kearns Goodwin. One of the most thought-provoking opportunities for me was attending the Nuclear Age Peace Foundation’s Evening for Peace in October 2015. The Foundation had given our poli sci class some free tickets to the event. It was a chance to hear first-hand the harrowing and horror-filled story from a Hiroshima survivor, Setsuko Thurlow. It was this event that led me to an intern position at the Foundation. I couldn’t be more grateful to the many sponsors who made it possible for a student like me to attend this event.

Fast forward to my first few weeks interning with NAPF. I hope to grow my political communication skills and learn from more experts and peace warriors on how true freedom from the nuclear threat can be achieved. I also hope to help educate more people on what we can do to save humanity and our planet from these horrible weapons of mass annihilation.