Statement of Marshall Islands to the 2015 NPT Review Conference 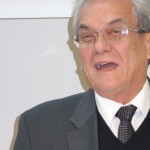 For far too many years, these circular negotiations on nuclear non-proliferation have failed to listen closely to those voices who know better. There are several nations and peoples in the world who have experienced nuclear weapons directly — and the Marshall Islands stands among them in close solidarity. In particular, many Hibakusha have traveled from Japan to this meeting to ensure global decision-makers hear their powerful message.

How many in this room have personally witnessed nuclear weapon detonations?

I have — as a young boy at Likiep atoll in the northern Marshall Islands, during the time in which 67 nuclear weapons were tested between 1946 and 1958 — at an explosive scale equivalent to1.6 Hiroshima Shots every single day, for 12 years.

When I was nine years old, I remember well the 1954 Bravo shot at Bikini atoll – the largest detonation the world had ever seen, 1000 times the power of the Hiroshima blast. It was the morning, and I was fishing with my grandfather. He was throwing the net and suddenly the silent bright flash — and then a force, the shock wave. Everything turned red — the ocean, the fish, the sky, and my grandfather’s net. And we were 200 miles away from ground zero. A memory that can never be erased.

These nuclear tests were conducted during the Marshall Islands time as a United Nations Trust Territory — and many of these actions were taken, despite Marshallese objections, under UN Trusteeship Resolutions 1082 and 1493, adopted in 1954 and 1956. Those resolutions remain the only specific instances in which the United Nations has ever explicitly authorized the use of nuclear weapons.

Nuclear weapons tests have created lasting impacts in the Marshall Islands — not only a historical reality but a contemporary struggle for our basic human rights — but I have not traveled to the NPT meeting to air out any differences with our former administering authority, the United States. The facts speak for themselves. Instead, I bring with me this moral lesson for all nations – because no one ever considered the humanitarian impacts of nuclear weapons, the Marshallese people still carry a burden which no other people or nation should ever have to bear. And this is a burden we will carry for generations to come.

The serious shortfalls in the NPT’s implementation are not only legal gaps, but also a failure to address the incontrovertible human rights clarified by the recent outcomes of the Conferences on the Humanitarian Impact of Nuclear Weapons in Norway, Mexico and Austria. Over 150 nations, including the Republic of the Marshall Islands, have joined the Statement on the Humanitarian Consequences of Nuclear Weapons at the UN General Assembly’s First Committee. An overwhelming global majority agrees that the humanitarian dimension of disarmament must be the strongest centerpiece of multilateral assurance.

It should be our collective goal to not only stop the spread of nuclear weapons, but also to truly achieve the peace and security of a world without them, and thus end the cycle of broken promises. This is why the Marshall Islands serves a co-agent in action presently before the International Court of Justice, which has brought this matter to the direct attention of the world’s nuclear powers. After decades of diplomacy, the NPT’s defining purpose remains unfulfilled, and those who are unwilling to negotiate in good faith will be held to wider account.

Still, there is hope – the Republic of the Marshall Islands lends it’s support to the recent outcomes, driven by the United States and the “P5 plus 1,” that opens doors towards a framework approach which will prevent Iran from obtaining nuclear weapons . These negotiations are far from final — but if they are completed, the international community will have proven that multilateral negotiation can still yield positive steps towards averting nuclear danger.

If only such resolve was carried into the NPT. It is true that the world has slowly reduced the number of nuclear weapons. But no one can keep a straight face and argue that sixteen thousand nuclear weapons are an appropriate threshold for global safety. We are seeing nuclear nations modernize and rebuild when they could use the opportunity to reduce. There is no right to “indefinite possession” to continue to retain nuclear weapons on security grounds.

At this year’s meeting, we need to address legal approaches capable of achieving “effective measures” on disarmament — and if that means a new legal framework towards the time bound elimination of weapons and risks, with good-faith parameters rather than loopholes, and with meaningful participation from all necessary nuclear actors — then the Marshall Islands is all for it.

The 2010 NPT action plan is an important benchmark but it reveals serious shortcomings in implementation — which cannot merely be “rolled over” without consequence. The valid right of NPT Parties to use nuclear energy for peaceful purposes only exists with the highest standards of safety and security — and NPT States must be held to full account for violations or abusing withdrawal provisions.

We should further affirm that the Test Ban Treaty is vital to the NPT, recognizing that it’s entry into force is essential. The Marshall Islands’ own direct experience should be lesson enough for the world to firmly commit to ending nuclear testing.

Further, all relevant States Parties should take necessary measures to bring about entry into force of agreements establishing nuclear-free weapons zones. In particular, the support of the Republic of the Marshall Islands for a nuclear-free Pacific has long been clouded by other agreements, and we are encouraged that the United States has provided a new perspective on the Rarotonga Treaty’s Protocols. We express again our aspirations to join with our Pacific neighbors.

There may be different avenues towards on achieving a world without nuclear weapons — but our worst fear is merely continuing the status quo – seeing no meaningful answer at all. Perpetuating the status quo, patting ourselves on the back and expecting accolades for making zero progress at this NPT Review Conference is totally unacceptable to all peoples and all nations. Surely we can, and must do better.