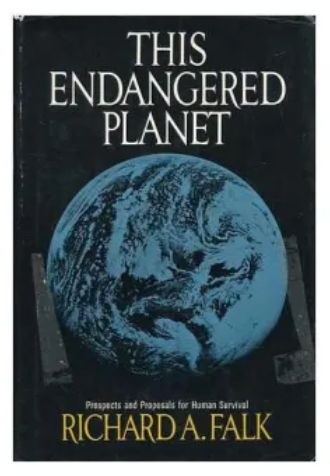 We are thrilled to share that This Endangered Planet: Prospects and Proposals for Human Survival (1971) by Richard Falk, our Senior Vice President, has been selected as a Book for the Century (Political and Legal) on the occasion of the centennial issue of the magazine Foreign Affairs, issued by the Council on Foreign Relations. Richard’s book is part of a set considered “essential for understanding the century ahead.” The reviewers highlighted Richard’s use of terms such as “limits to growth” and “spaceship earth,” calling the book “evocative and illuminating.” In the book, Richard calls “for a revolution in consciousness that would reimagine how peoples and societies could organize themselves for sustainable life.” See the full review HERE and join us in congratulating Richard!

To celebrate this enormous honor and to revisit the topics Richard discussed in the book more than 50 years ago, our President Ivana Nikolić Hughes and Richard will meet in conversation as part of our Nuclear Dangers series. Details will be announced shortly!