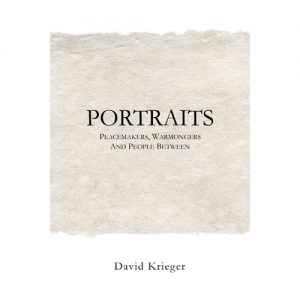 This is the sixth collection of poems by David Krieger, an American peace leader and poet who has lived through and been impacted by the events since the Second World War. This unique collection of 70 poems is not just about well known figures but also ordinary folks, the People Between.

The poems are poignant and powerful, reminding us of personalities from the poet’s humanist perspective that probe the state of global affairs while questioning those who end as its leaders. David Krieger’s pen has irony, it reveals both hurt and sorrow as well as hope and compassion for the world we live in and its frailties.

The first and last poems of the book, ‘To Be Human’ and ‘The One-Hearted’, describe   the book’s overarching spirit:

“To be human is to recognize the cultural perspectives that bind us to tribe, sect, religion, or nation, and to rise above them….

To be human is to breathe with the rhythm of life. It is to stand in awe of who we are and where we live. It is to see the Earth with the eyes of an astronaut.”

The final poem, ‘The One Hearted’ demonstrates the same optimism:

“They are warriors of hope, navigating
oceans and crossing continents.
Their message is simple: Now
is the time for peace. It always has been.”

Portraiture in writing involves etching personality in a moment giving us insight into the subject of observation. It’s their action in such a moment in Krieger’s collection which defines his protagonist as peacemaker or warmonger. Krieger is a story teller. Most poems are about the courage of a nonviolence activist where the protagonist like Gandhi’s Satyagraha adherent defies the oppressor standing fiercely to face up to the evil.

“But the politicians and the generals
know what they do
when they give their orders
to murder at the altar.”

He speaks of the Bishop:

“Bishop Romero saw this clearly,
Lay down your arms, he said.
This, the day before his assassination.

the day before they shot him at the altar,
God, forgive them, they only follow orders
They know not what they do.”

Norman Morrison’s self-immolation as a protest in front of the Pentagon (p.44):

“When it happened, the wife of the YMCA director said,
“I can understand a heathen doing that but not a Christian”.
Few Americans remember his name, but in Vietnam
children still sing songs about his courage.”

“By not moving, you began a movement,
like a cat stretching, then suddenly alert.”

Cindy Sheehan’s waiting answer from U.S. President Bush about her soldier son’s death in a war of no meaning, the Iraq war where “my son died for nothing” , In ‘I Refuse’ (p.41) dedicated to activist Camila Mejio, the voices of resistance unite in solidarity refusing to be silenced, refusing to suspend their conscience or giving up their humanity.

The poems can be grouped along the lines of post- Second World War American military adventures — Vietnam War, Iraq War, Israel-Palestine War, and Nuclear Weaponization.  These include astute observations about warmongers. On Robert McNamara’s mea culpa in 1995 about the body count in Vietnam War (p.8), Krieger writes: “You broke the code of silence. Your silence was a death sentence to young Americans – to young men who believed in America.” In the same vein, in his portrait of  US Secretary of Defense Dick Cheney from Bush era he notes (p.32):

“It is a dangerous, deceitful face
the face of a man with too many secrets.

“They tell me I am brave, but
how brave can it be to drop bombs
on a crowded city? I am a cog, only that,
a cog in a fancy machine of death.”

Krieger does not hide his bitterness about those responsible for building and dropping Atomic Bombs on Nagasaki and Hiroshima in August 1945, forcing upon the humanity the unwanted Nuclear Weapons Age we live in.  In ‘An Evening with Edward Teller,’ he derides the “father of the H-bomb’:

“It was difficult to grasp that
he must have been born an innocent child, and only
slowly, step by step, became what he became.”

Another priest at the altar of the temple of doom, the Atom Bomb builder Robert Oppenheimer expresses this more cataclysmically in a poem, “On Becoming Death” (p.19), citing from The Bhagavad Gita: “Now I am become death, the destroyer of worlds.”  Standing in front of a US President, Oppenheimer had spoken of having “blood on my hands”. To which Truman responds: “Blood? What Blood?” When Oppenheimer leaves, Truman orders his White House officials, “Don’t ever let him in here again.”

Krieger can be humorous.  “Greeting Bush in Baghdad” is about the Iraqi journalist Muntader Al-Zaidi’s “farewell kiss” to Bush in the form of his shoes  hurled at the visiting President at a press conference. Al-Zaidi muses that his left shoe hurled at the U.S. President is for his “lost and smirking face” and the right shoe for a “face of no remorse” of caused death and destruction of his country.

There are many poems in the collection especially those of remembrance written as an elegy for a friend, colleague, child, old man, and a dead soldier, written with fine sensitively and subtlety. My favourite is a short poem, ‘Standing with Pablo’ (p.40).  It’s about the poet’s admiration for his three Pablos: Picasso, Neruda, and Peredes. The first painted Guernica, the second wrote poems of love and dignity, and the third, Pablo Peredes whom we know little about, refused to fight war in Iraq.  Unlike the other two, the little known Peredes, “refused to kill or be killed”.

Krieger’s poetry is direct, honest, and without pretense. It depicts the social reality surrounding us, invoking our shared humanity to bring about imminent peace needed globally. – An important collection.