I recently learned that Admiral Gene La Rocque died on October 31, 2016 at the age of 98.  He is buried at Arlington Cemetery.  Gene had a long career in the military, rising to the rank of rear admiral. In 1971, after his retirement from the military, he was one of the principal founders of the Center for Defense Information (CDI), a non-profit, non-partisan educational organization concerned with analysis of military matters and particularly abuses in defense expenditures.  CDI was led by retired military officers, including Gene, who was its first director.  The organization supported a strong defense, but opposed excessive expenditures for weapons and also policies that increased the likelihood of nuclear war. 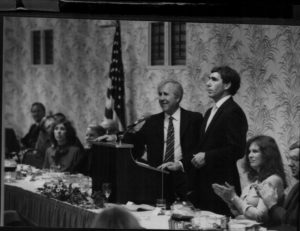 In 1985, the Nuclear Age Peace Foundation gave its Distinguished Statesman Award to Gene for “courageous leadership in the cause of peace.”  (The name of the award was later changed to Distinguished Peace Leadership Award.)  Gene came to Santa Barbara to receive the award and spoke on “The Role of the Military in the Nuclear Age.”  In his speech upon receiving the Foundation’s award, Gene shared some important insights.  He said, for example, that, based upon his long military experience, he believed “that war is a very dumb way to settle differences between nations.  And nuclear war is utterly insane.”  Gene was always a straight talker.

He also had this to say about nuclear war: “If we are to have a nuclear war, we can’t win it.  Can we survive it?  I don’t know.  Nobody knows.  That’s the tragedy of it – nobody knows.  Anybody that tells you that this many people are going to be killed and this many are going to survive doesn’t know what he’s talking about.”

Referring to a war between the U.S. and Soviet Union, he said, “We’re getting closer to a war we don’t want, a war we can’t control, a war in which we can’t defend ourselves, a war we can’t win, and a war we probably can’t survive.”  Substitute “Russia” for “Soviet Union,” and these words are as true today as they were in 1985.

Gene La Rocque was a wise and humble man, who stood squarely on the side of justice and peace.  He served for many years as a member of the Nuclear Age Peace Foundation’s Advisory Council, when we could always count on him for his good advice and his abiding decency.  He was self-deprecating and had a great sense of humor.  He lived a long life and a good life, and he did his utmost to leave the world a better place.

I urge you to follow Gene’s advice “to do something every day if you want to avert a nuclear war.”  No advice from a military leader could be more important or more useful to the fate of humanity.

To read Admiral La Rocque’s 1985 speech on “The Role of the Military in the Nuclear Age,” click here.