These comments were delivered by Tony de Brum at a ceremony in Japan on March 1, 2016. 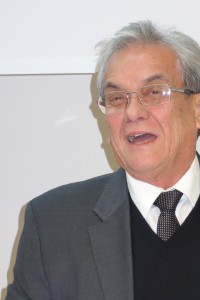 I am honored to be here with you on this very special occasion.

I wish to first offer my apologies for not keeping my promise to be with you in previous years for reasons which were not within my control.

I bring you greetings from the people of the Marshall Islands who, like you, share the knowledge of the horrors of nuclear weapons and their ever increasing threat to human life, to our children, and to our mother earth.

While our experience with nuclear arms cannot even come close to matching that of our Japanese brothers and sisters, it has taught us lessons of everlasting value not just for ourselves but all of mankind. From the deliberate exposure of human beings to radiation to systematic cover up of critical health impacts, from human experimentation to premature resettlement of exposed populations, from denial of claims to withholding of information critical to basic understanding of the extent of damage, the nuclear history of the Marshall Islands has been nothing short of a testament to human beings being abused, mistreated and marginalized by more powerful, more ambitious neighbors.

The most important of these lessons can only be that nuclear weapons of any kind are immoral and illegal and cannot be allowed to exist amongst civilized human beings. Nuclear weapons cannot be justified for any reason whatsoever, including those we continue to hear from countries claiming that these arms are required to preserve peace and security for the world.

Nuclear weapons have no conscience, no sense of discrimination, and cannot differentiate between good and evil. Like all weapons of mass destruction, nuclear arms have no mercy for babies and children, they are not selective as to flowers and trees and food and soil. They destroy all life and render a devastation that is final, complete, and irreversible. That itself should be reason enough to ban them from the face of the earth.

Between 1946 and 1958 the United States conducted atomic and thermonuclear tests and experiments in the Marshall Islands. The cumulative output of these tests has been described by Mr. Jon Weisgall, an attorney for the people of Bikini Atoll, as having a yield equivalent to “detonating 1.6 Hiroshima bombs every day, for twelve years”. One of those events, the BRAVO shot of March 1, 1954 had the combined force of 1000 Hiroshima bombs. That the experimentation of nuclear weapons in the Marshall Islands wreaked havoc on the island community is an insensitive and cynical understatement, forever insulting and hurtful to our people. America’s nuclear program in the Marshall Islands inflicted pain and suffering to those who lived to see the tests themselves, those who survive today as Marshallese wounded in body and spirit, and those of future generations who will continue to bear the scars of this terrible chapter in our country’s history.

To this day, the United States continues to classify information pertinent to tests even though we have repeatedly requested their release. To this day, knowledge critical to our understanding the true extent of nuclear damage done to our people and our homeland is kept secret by America. According to their government, this information is withheld from public scrutiny because it is in the national interest of the United States that nuclear secrets be kept secret. Even after review by a United Nations Rapporteur and very specific recommendations made in his report, the United States still remains intransigent in its position to keep secret their nuclear activities in the Marshall Islands.

Unless and until the United States government releases all the information held in secrecy but necessary for the full understanding of its nuclear tests in the Marshall Islands, no government, no leader worth his salt, no legislature, commission or scientific panel can claim fair and just resolution to the nuclear disagreement. There can be no closure without full disclosure.

As we speak, even more discoveries are being made in the Marshall Islands where environmental degradation and pollution directly attributable to nuclear weapons testing continue to threaten the health and livelihood of our people and pose immeasurable dangers to the health and well being of our children and their future generations. In Kwajalein Atoll, where missiles to deliver nuclear weapons are tested, severe heavy metal and other contamination of land and water has been so severe, the consumption of fish and other seafood has been found to be dangerous to human life and health. We cannot observe this injustice in silence and fear. We cannot allow our future generations to be permanently wounded on account of our timid refusal to confront and seek justice under the law. We cannot justify our existence as leaders and caretakers of our lands and heritage if we do not do all in our power to ensure that the truth of nuclear madness is exposed and the end of nuclear insanity is part of our global agenda. Only then will true peace be achieved and only then will the sacrifice of our forebears receive the respect and honor deserved.

In recent times, the Marshall Islands have filed in the International Court of Justice (ICJ) a lawsuit against the nuclear powers of the world seeking their compliance with Article VI of the Nuclear Non Proliferation Treaty. That action seeks to compel those countries with nuclear weapons to commence immediate negotiations to disarm and to negotiate in good faith an agreement for the elimination of nuclear weapons from the earth. Oral arguments are being heard in the Hague on the 7th of March of this year. We are confident that justice will prevail and that our nuclear powers will see their way clear to comply with the undertaking they made in signing the NPT to rid the world of nuclear weapons. I must make it absolutely clear that these ICJ lawsuits do not seek compensation, nor do they seek to point fingers or level liabilities against any of the nuclear powers. Our lawsuits only seek to engage the nuclear powers in negotiations for disarmament as they agreed to in the NPT.

To our brothers and sisters in Japan, the people of the Marshall Islands stand with you in your efforts to stop the spread of nuclear weapons and to ban all development of these terrible arms which threaten us, whether in the military context or in its civilian for power generation. As long as these weapons are around and are capable of deployment at a second’s notice, we are in danger.

Nuclear weapons can be used by design or by accident, by military planning or by the act of insane characters; for as long as they exist, they are making human race a target in the nuclear killing field. That must end, it must stop, and we must be part of the movement to restore true peace and harmony in a world without nuclear weapons. It is something that we owe to those who have passed on before us as well as those of our future generations. It is the least we can do for our children and children’s children. Until that happens we must unite in our mission to eliminate nuclear weapons and serve that purpose until every breath in our bodies is gone.

To all our friends who have gathered with us today we bring you love from your Marshallese neighbors. May peace be with you and all our brothers and sisters in Japan, in Polynesia, and in every corner of our world.

Ours is a just cause, and we shall prevail.