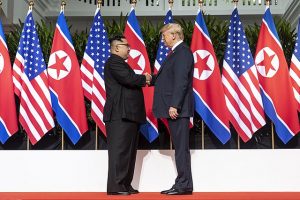 This article was originally published by Counterpunch.

After the Singapore Summit between Kim Jong-un and Donald Trump, Trump was very upbeat about the denuclearization of North Korea. On June 12, 2018, Trump said in a CNN interview, “He’s denuking the whole place and he’s going to start very quickly. I think he’s going to start now.” Seriously?

For this to happen, Kim would have to be either a fool or a saint. And, of course, he is neither. Rather, he is a third generation dictator who fears the overthrow of his regime, likely by the US. Kim knows that his best guarantee against that happening is his possession of nuclear weapons.

Kim certainly knows the history of Saddam Hussein and Muammar Gadhafi. Both gave up their respective country’s nuclear programs. After doing so, each was overthrown and killed. Hussein was put on trial by the US puppet regime in Iraq and was sentenced to death by hanging. The sentence was carried out on December 30, 2006. When Libyan rebels, with help from the US, France and the UK, attacked the Gadhafi regime, Gadhafi attempted to hide and escape, but he was captured, tortured and killed.

Given this history, why would Kim make himself vulnerable to overthrow when he doesn’t need to do so? The answer is that he won’t, which also means that he won’t completely denuclearize.  Since this is the logic of Kim’s position, we might ask: why has Trump been so effusive about Kim’s prospects of denuclearizing? Obvious explanations are that Trump is a novice at conducting international negotiations and that he thinks exceptionally highly of himself as an effective negotiator.

For Trump to believe that Kim would bend to Trump’s will and denuclearize, Trump would have to be either a fool or an extreme narcissist. Unfortunately, he appears to be both and seems intent on proving this over and over again. Another example is his pulling out of and violating the Iran agreement negotiated with Iran by the US, UK, France, Russia, China and Germany. Fortunately, none of the other parties to the agreement has joined the US in pulling out.

Denuclearization is a good thing, and I am all for it. The US, as the strongest military power in the world and the only nation to have actually used nuclear weapons in war, should be leading the way. Nuclear weapons do not protect the Trump regime, as they do the Kim regime. Nor, for that matter, do they protect the US. Which would be safer for the US: a world with nine nuclear-armed states, as we currently have, or a world with zero nuclear-armed states?

The logic here is that if Trump is serious about a denuclearized North Korea, he had best play a leadership role in convening negotiations among the nine nuclear-armed states to achieve a denuclearized planet. In such negotiations, it will be necessary to deal with the concerns and fears of the leaders of each of the nuclear-armed countries, including those of Kim Jong-un. The world we live in is far from perfect, but we would all be better off if the overriding nuclear threat to humanity was lifted from our collective shoulders.

It will require a process of good faith negotiations to get to zero nuclear weapons. That, in turn, will require political will, which has been largely lacking, even though it was agreed to by all the parties to the Non-Proliferation Treaty (NPT). Article VI of this treaty obligates its parties to pursue negotiations in good faith for an end to the nuclear arms race at an early date and for complete nuclear disarmament. Fifty years after the NPT was opened for signatures in 1968, this obligation remains not only unfulfilled but untried. For the nuclear-armed parties to the NPT to take this obligation seriously would be a major turn-around in their behavior.

Another treaty, the Treaty on the Prohibition of Nuclear Weapons, was adopted by 122 countries in July 2017 and is now opened for signatures and the deposit of ratifications. The treaty prohibits, among other things, the possession, use and threat of use of nuclear weapons. Again, the nuclear-armed countries have been largely hostile to this treaty. None of them have signed it or indicated support for it, and the US, UK and France have said they would never sign, ratify or become parties to it.

Our common future on the planet rests on generating the support and political will to fulfill the promise of these two treaties. Putting the global nuclear dilemma into perspective, it should be clear that denuclearization of North Korea is only one piece of the puzzle, one that is unlikely to be achieved in isolation. A far greater piece lays in the failure of the US to show any substantial leadership toward attaining a nuclear zero world. Failure to achieve the goal of global denuclearization could mean the end of civilization and most life on our planet. And where is the logic in that?

David Krieger is a founder of the Nuclear Age Peace Foundation (www.wagingpeace.org) and has served as its president since 1982.