As the Ukraine War continues to rage, geopolitical tensions rise, and nuclear threats are not only used, but also normalized by the popular media, team NAPF feels a renewed sense of urgency and importance to our work. Our calls for a peaceful world free of nuclear weapons feel as important as at any point since our founding in 1982, and certainly more important than at any point in this century.

Two international days that align with our mission were commemorated and promoted at the United Nations in New York in September. They are the International Day Against Nuclear Tests (normally August 29, but this year recognized on September 7) and the International Day For Total Elimination of Nuclear Weapons (September 26). Christian and I attended both high-level meetings and I also had the opportunity to deliver a statement on behalf of NAPF on September 26. My statement focused on the absolute imperative of nuclear weapons abolition, drawing on lessons from the past, the current state of affairs, and what studies – including those of nuclear winter – tell us about the future on Earth ravaged by nuclear war. Please watch it below, if you haven’t already! 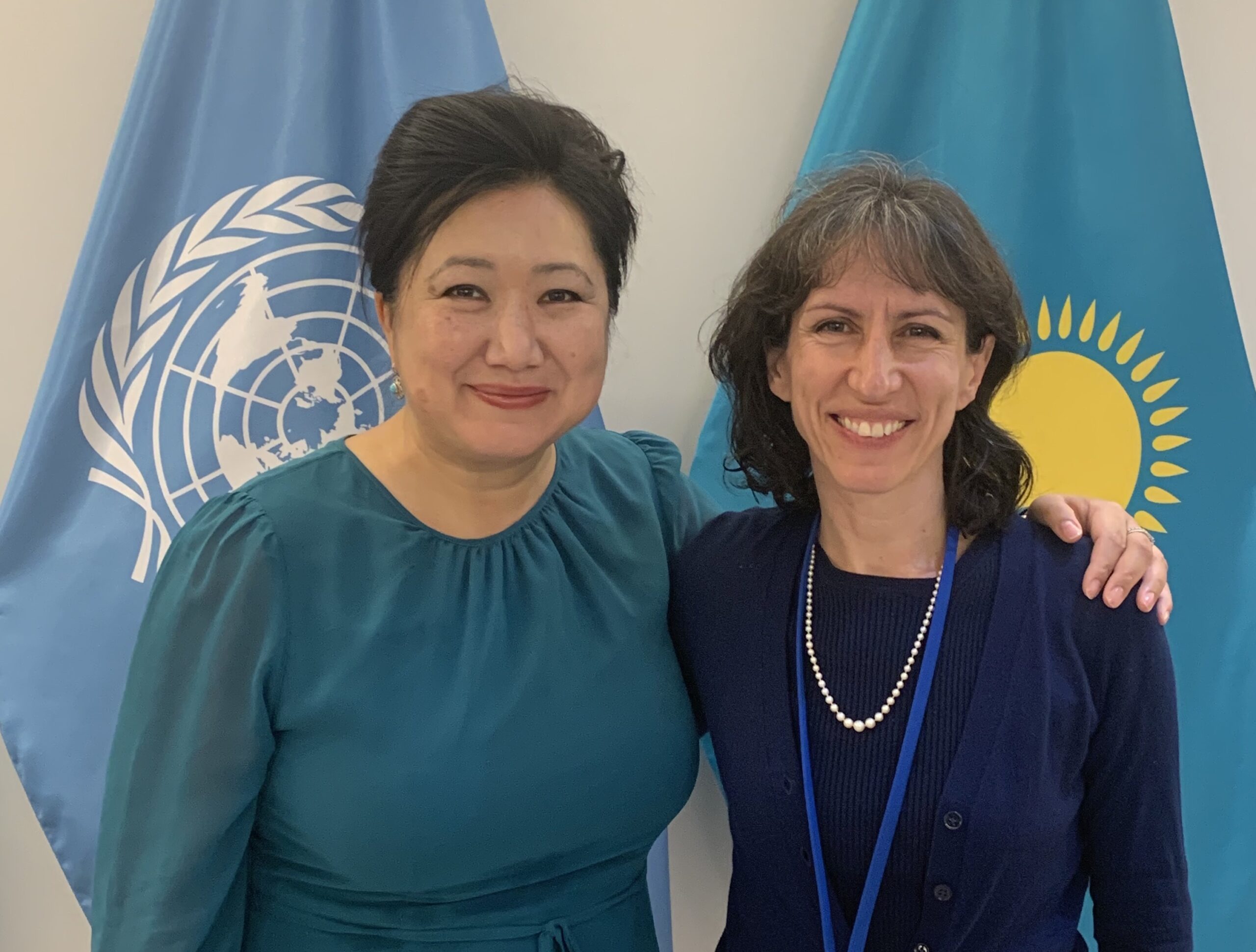 With Togzhan Kassenova, author of Atomic Steppe, on September 7. 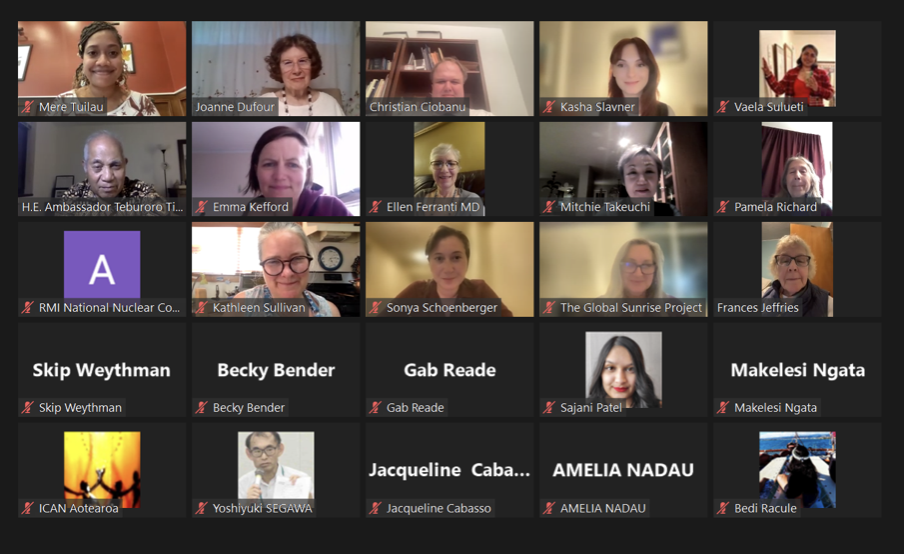 Panelists and participants at the September 26 event.

In New York, the week of the UN General Assembly is best known for the traffic gridlock it brings to midtown Manhattan, but this year, with so much at stake, many were paying attention to addresses by heads of state and other top government officials. The chasm between the US and its allies on the one hand, and Russia on the other, was on full display. Christian attended nearly all of the sessions and I attended a few, including the one featuring the video address by President Zelinsky of Ukraine. We were encouraged by statements made by states that are party to the Treaty on the Prohibition of Nuclear Weapons, urging all other states to join the TPNW. We were also inspired by the statement by the President of the Marshall Islands, stressing that, “It is vital that the legacy and contemporary challenges of nuclear impact testing be better addressed, that climate change be addressed with the urgency and commitment it deserves, and that our voice as an equal partner be strengthened.”

This month we received the wonderful news that Richard Falk’s book This Endangered Planet: Prospects and Proposals for Human Survival (1971) was selected as a Book for the Century (Political and Legal) on the occasion of the centennial issue of the magazine Foreign Affairs, issued by the Council on Foreign Relations. Richard’s book is part of a set of three books considered “essential for understanding the century ahead.” The reviewers highlighted Richard’s use of terms such as “limits to growth” and “spaceship earth,” calling the book “evocative and illuminating.” In the book, Richard calls “for a revolution in consciousness that would reimagine how peoples and societies could organize themselves for sustainable life.” See the full review HERE and join us in congratulating Richard!

In order to celebrate this enormous honor and to revisit the topics Richard discussed in the book more than 50 years ago, Richard and I met in conversation as part of our Nuclear Dangers series. I was – as always – humbled by Richard’s wisdom, warmth, insight, and grace. He continues to inspire me personally to do better and to be better. If you missed the event, you can watch the recording below.

Our next two Nuclear Dangers events will take place on Zoom on Thursday 10/27 at 11 a.m. PT with John Burroughs, Jackie Cabasso, and Andrew Lichterman and Tuesday 11/29, also at 11 a.m. with Marty Hellman and Benoit Pelopidas. We are very much looking forward to these opportunities to explore the current challenges and think together about the path forward. Stay tuned for details to come.

We will also hold an event on the importance of disarmament education next week as a side event to the meetings of the UN First Committee (on disarmament and international security). The event will take place on Tuesday, 10/11 1:15-2:30 p.m. on Zoom. Details will be posted on our website shortly.

Preparations are in high gear at this point for our first annual Women Waging Peace Luncheon on November 10, honoring Cynthia Lazaroff and Senator Monique Limón. Read more about our honorees HERE. If you are part of our local Santa Barbara community, we hope you may be able to join us! If you are too far away to make the trip, we hope you might consider making a donation to support the event.

If you have not seen our website recently, check out some changes we made to the homepage and how information is organized. It’s work in progress, but we’re very excited to feature a new look!

As we continually reflect on the importance of our own work, we are encouraged by the efforts of many others around the globe to address the challenges of the current moment. With colleagues from Malaysia and Australia, Richard Falk has published A Call To All Who Care About Humanity’s and the Planet’s Future. See HERE for the call and to sign the petition. On October 27, I will moderate a panel to discuss this call; stay tuned for details. Additionally, religious leaders from across the US came together to write a letter to President Biden regarding the imperative of arms control negotiations with Russia; see HERE. Also, a campaign for Peace in Ukraine is organizing events this month in recognition of the upcoming 60th anniversary of the Cuban Missile Crisis. Find out more about the campaign’s efforts HERE. Finally, the Declaration of Concern we wrote back in May feels as relevant today as it did in the early months of the war. If you haven’t, please read it and sign it.

We are thankful for everything you do to make our work possible and invite you to continue to engage in any and all efforts for a just and peaceful world, one that is free of nuclear weapons.

Warmly and with gratitude,