The President Is Unfit for Office 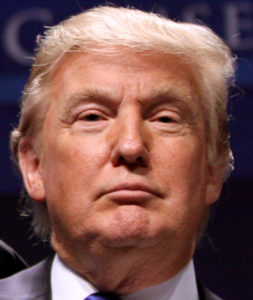 With each passing day it becomes increasingly apparent that Donald Trump is unfit to carry out the duties of President of the United States, particularly those of commander in chief. He is erratic, impulsive, thin-skinned and narcissistic. These are dangerous qualities in someone with control over a nuclear arsenal that, if used, could lead to the destruction of civilization and human extinction. Trump is not trustworthy to have such power at his fingertips and should be removed from office.

To achieve peace with North Korea, the U.S. must be engaged in negotiations with their leadership. It seems simple enough, but the Trump administration appears unwilling. The talks must begin immediately, and the U.S. must do so without preconditions.

Rather than pursuing this path, however, the Trump administration seems intent on tightening economic sanctions on North Korea, a strategy bound to fail. Trump recently said that the U.S. is considering stopping trade with any country that trades with North Korea. This is a non-starter unless we want to stop trading with China, leading to a serious deterioration in U.S.-China relations and possibly a worldwide recession.

The Nuclear Age Peace Foundation has recently released an Open Letter to Members of Congress. It calls upon Congress to impeach Trump, or, at a minimum, pass legislation that would require a declaration of war and specific authorization of Congress before the president could engage in a first-strike nuclear attack. The Open Letter follows below. If you would like to sign the letter, click here.

OPEN LETTER TO MEMBERS OF THE U.S. CONGRESS: ACT TO PREVENT NUCLEAR CATASTROPHE

This may be the most dangerous time in human history. The Roman emperor Nero is remembered for having fiddled while Rome burned. We may be witnessing the far more dangerous Nuclear Age equivalent to Nero’s fiddling in the form of the nuclear threat exchanges between Donald Trump and North Korea’s Kim Jong-un.

The U.S. has elected a man to its highest office who is erratic, impulsive, thin-skinned and generally imprudent and insufficiently informed on nuclear and foreign policy issues. As president, he possesses unrestricted authority to threaten and use the weapons of the U.S. nuclear arsenal, which could lead not only to the destruction of our country but to dire consequences for the entire world.

The president has already caused widespread national and global alarm by his behavior in office, including his participation in a dangerous and irrational escalation of threats directed at the erratic leader of nuclear-armed North Korea, which if executed would produce a monstrous catastrophe of untold consequences. James Clapper, former Director of National Intelligence, a normally cautious civil servant, has described the president’s behavior as “downright scary and disturbing.”

There are currently no restraints on the president’s ability to use the insanely powerful weapons in the U.S. nuclear arsenal, including using them in a first-strike attack rationalized as preventive war. To allow this set of conditions to persist would be a perilous, perhaps fatal, abdication of Congressional responsibility, posing severe dangers to the peace and security of the country and world.

What can be done?

Having shown himself to be unfit for office, the president should be impeached and removed from office by the Congress as a matter of most urgent priority, or possibly removed from the presidency by recourse to procedures under the 25th amendment.

Congress should also independently act to put unconditional restraints on any president’s ability to threaten or order a nuclear first-strike. One approach would be enactment of the “Restricting First Use of Nuclear Weapons Act,” introduced by Senator Ed Markey and Representative Ted Lieu, which would prohibit the president from initiating a first-strike nuclear attack without a Congressional declaration of war expressly authorizing such strike. We would urge even stronger legislation that would make illegal any U.S. nuclear first strike and threats to do so.

We do not suggest that the Markey-Lieu legislation would cure a nuclear first-strike of its essential immorality and illegality under international law. This legislation would, however, broaden the long-standing, dangerously centralized U.S. decision-making authority over a nuclear first-strike and could lead to a U.S. commitment never again to use nuclear weapons except in retaliation against a nuclear attack.

While this proposed legislative initiative on first-strikes is a responsible effort to limit presidential authority with respect to nuclear weapons under present conditions, we urge a parallel framework of restraint with respect to any contemplated threat or use of nuclear weapons by a U.S. president. Additional legislation to this end needs to be proposed and enacted by Congress after appropriate vetting through hearings and public discussion as a matter of supreme national interest and for the benefit of global security.

Furthermore, we would hope that in due course the United States would join with the majority of countries in the world in supporting the recently negotiated UN Treaty on the Prohibition of Nuclear Weapons.