Poetry of Sorrow and Hope

This article was originally published by the Huffington Post. 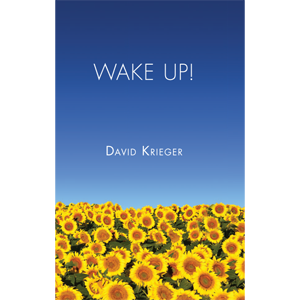 David Krieger’s new book of poems — Wake Up! — shows us that poetry engaged with world affairs can be very powerful.

In a brief introduction to the book, Krieger — the president of the Nuclear Age Peace Foundation and the author of several previous volumes of poetry — remarks that those who write poetry after Auschwitz, as well as after Hiroshima, Nagasaki, wars, and threats of universal death, must not only “confront the ugliness of human brutality,” but “express the heart’s longing for peace and reveal its grief at our loss of decency.”

He adds: “They must uncover the truth of who we are… and who we could become.” In this slender volume, Krieger succeeds brilliantly at this task.

In short, accessible and moving poems, Krieger ranges over a variety of issues. Prominent among them are the forgotten crimes of war (described in “Little Changes”):

From My Lai
to Abu Ghraib —
the terrible silence.

In “Among the Ashes” and elsewhere, Krieger also focuses on the atrocity of nuclear war:

Among the ashes
of Hiroshima
were crisply charred bodies.

In one of the charred bodies
a daughter recognized
the gold tooth of her mother.

As the girl reached out
to touch the burnt body
her mother crumbled to ashes.

Her mother, so vivid
in the girl’s memory, sifted
through her hands, floated away.

As might be expected, the officials of the major war-making powers do not inspire Krieger’s admiration. In a poem about George W. Bush (“Staying the Course”), Krieger writes:

The race has been run
and he lost.

Yet, he swaggers
around the track as though
it were a victory lap.

It is hard not to think:
How pathetic is power.

By contrast, there are numerous poems in Wake Up! that celebrate the humane values of Albert Einstein, Jesse Jackson and other individuals. In a beautiful tribute to Nelson Mandela (“Madiba”), Krieger asks: “How does one earn the world’s respect?” And he answers: “He showed us with his life.” There are even elegant poems (such as “We Walked Together”) calling attention to the beauty of life and love:

In fog we walked along an empty beach,
above the water’s edge, and looking back
along the shore, we saw our footprints
in the sand, like a patterned prayer.

We are here upon this rare Earth but once, we mused.
Conscious of our brief light within the fog
and the brevity of being, we breathed deep our bounty
and the ocean air, each taking our full share.

In eternity’s long stretch of time,
behind us and ahead, we retraced our steps and
marveled that we should meet at all, let alone
here and now, in a place so fine and fair.

Sometimes, there is a surprise lurking in wait, as befits a poem (“Reflecting on You”) produced by a writer who stubbornly refuses to ignore reality:

Your soul, fully alive, has no sadness
from morning to night.

It is light and playful,
the soul of an innocent child.

Your soul is a hatchling, chirping
with joy, needing to be fed.

You are one of the fortunate ones,
never imagining what it means
to be lonely or frightened,

to be awakened in the night
and taken by the Gestapo.

Infusing Wake Up! is an element of brooding tragedy — of beauty corrupted, of potential unrealized. This element is captured in Krieger’s poem, “Archeology of War”:

The years of war numb us, grind us
down as they pile up one upon the other
forming a burial mound not only
for the fallen soldiers and innocents
who were killed, but for the parts of us,
once decent and bright with hope,
now deflated by the steady fall of death
and sting of empty promises.

And yet there remains a measure of hope, a belief that people can rise to the occasion. At least implicitly, that’s what comes through in “Wake Up!” — a poem about the danger of nuclear war that gives the book its title:

Wake up!
Now, before the feathered arrow
is placed into the bow.

Now before the string
of the bow is pulled taut,
the arrow poised for flight.

Now, before the arrow is let loose,
before it flies across oceans
and continents.

Now, before we are engulfed in flames,
while there is still time, while we still can,
Wake up!

Perhaps it takes poetry to move us beyond the chilling, day-to-day news — bombarding us about ongoing wars and preparations for nuclear annihilation — into a realm where we can truly confront the sadness of a world that, despite its enormous knowledge and resources, persists in organizing and engaging in mass slaughter. Perhaps poetry can also give us a fuller appreciation of the beauty of life, as well as the will to create a better future.

You can purchase a copy of Wake Up! at this link.

Lawrence Wittner (www.lawrenceswittner.com) is Professor of History emeritus at SUNY/Albany. His latest book is a satirical novel about university corporatization and rebellion, What’s Going On at UAardvark?