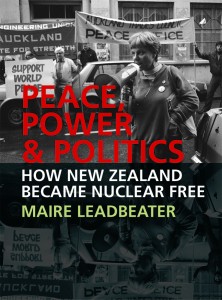 In a captivating and remarkably readable book, Maire Leadbeater follows the story of New Zealand’s peace movement from 1975 into the 2000s, telling the exciting story about how the people in movements can change a country. A spokesperson for Aukland CND in the 1980s, Leadbeater played a leading role in the mass movement described in the book, giving a unique, in-the-masses view of the action.

The leading argument of the book is that New Zealand’s nuclear-free policy was made not by the politicians who have taken the credit but by a vast peoples’ movement made up of scientists and doctors, housewives and schoolchildren. This wide-ranging account describes the motivations, actions, personalities, and hopes of the people who helped to create the tremendous force of public opinion which ultimately forced the hands of the politicians. As Leadbeater says, “If the people lead, the leaders will follow.”

Written chronologically, the author skillfully avoids any of the usual dullness or monotony one would usually find in a book such as this. The book is clearly and simply written, giving both a broad overlook of a decades-long movement while also inserting interesting and amusing details. The multitudes of forms of activism are described with life and color from polite petitions to head-on clashes of warships and kayaks. The book is worth reading for the plentiful amounts of illustrations, photographs, cartoons, and pamphlets, some of which will make you chuckle and laugh out loud.

The book goes into detail about three major campaigns: against the visits by nuclear warships to New Zealand, against French nuclear testing, and to the World Court. Although the facts of these events are well-known to some, this books gives a broad overview of the many viewpoints, while also giving insights into the way the campaigns formed and operated. The interplay between the politicians and the activists, and the thin line between following public opinion and foreign relations, is illustrated with such skill that I was amazed at the complexities the author was able to portray.

This book is definitely worth the time it takes to read as Leadbeater illustrates how political change can be driven by a grass-roots political movement instead of a hierarchical, formal process of working within the system. She also makes it clear that although there have been some wins, there is still much work to do, both within New Zealand and on a global scale.