This is the transcript of a talk given by Judith Lipton at the Nuclear Age Peace Foundation’s symposium “The Fierce Urgency of Nuclear Zero: Changing the Discourse” on October 24, 2016. The audio of this talk is available here. For more information about the symposium, click here. 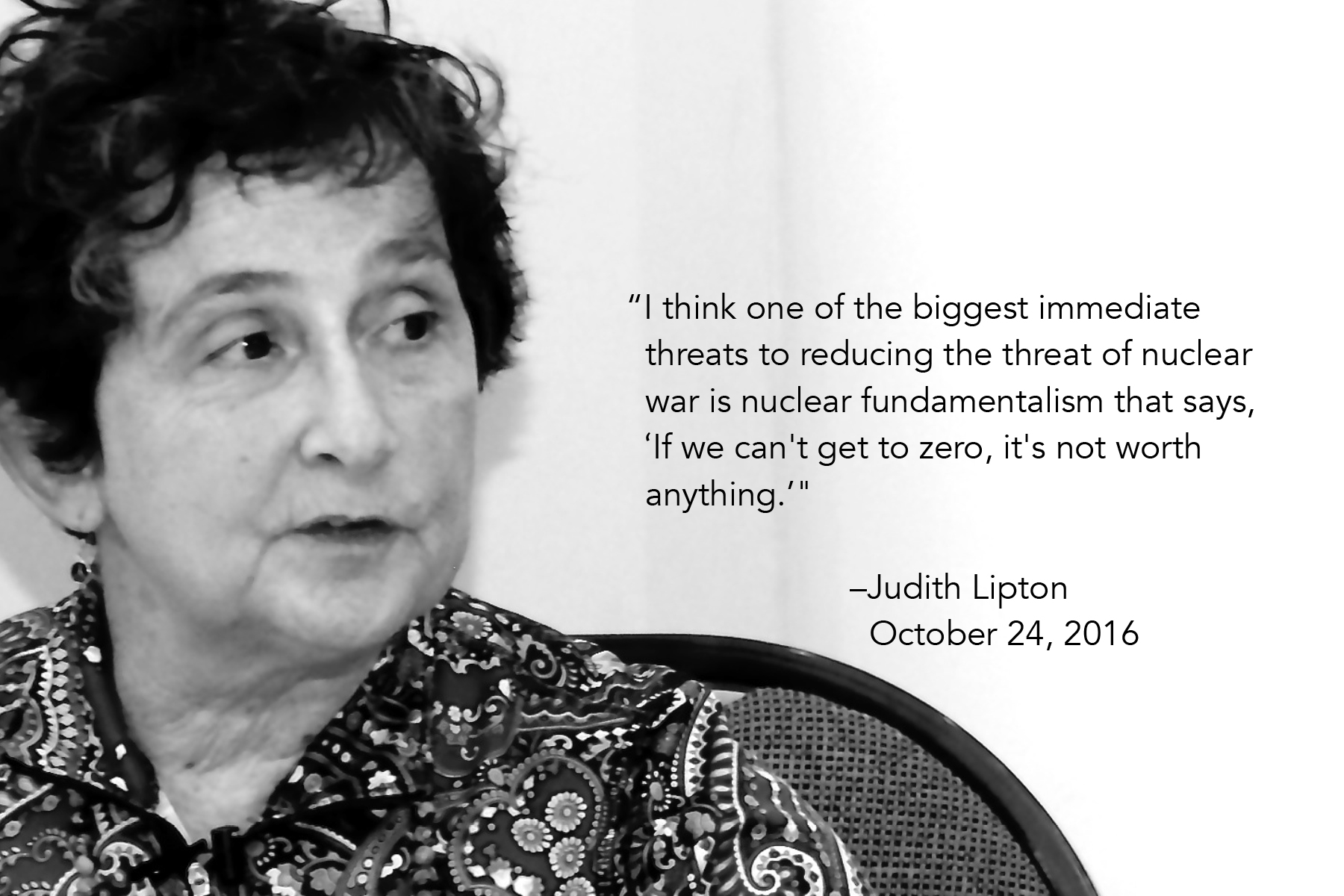 My name is Judy Lipton, I’m a psychiatrist. I’ve been involved with Physicians for Social Responsibility since 1979, but actually I was involved with SANE and SDS and SNCC and the Institute for Policy Studies back in 1965 during the Selma years and so forth. So I have a fairly long background in politics. You need to imagine that I’m not the only one sitting here. Please imagine for a second that there’s me, here, but that next to me, right over here is my husband, David Barash. And he’s the ghost in the room who’ll be speaking partly through my voice and sometimes through his own voice, but he’s definitely here, and you’ll hear him at times and I’ll try to tell you when he’s talking and when I’m talking.

I need to tell you that I’m stunned to be here; I’m extremely grateful to Richard Falk and David Krueger, I’m so incredibly happy to meet my hero Dan Ellsberg and Paul Chappell. But I do feel like Dorothy the small and meek, and I’m aware that each of you are what are called woggle-bugs, which is from volume II in the Wizard of Oz series, HM Woggle-bug, TE. And each of you should have an envelope with pictures, a bibliography, a list and some song lyrics here, a bunch of things. Much more than I could say in 15 minutes, because I had no clue how to wake people up in 15 minutes before dinner, except to put things down in a way that you could get back to them, and also these things are available online.

So I’m aware that all of you are highly educated, thoroughly magnified woggle-bugs in each of your own specialties. And I am Dorothy the small and meek, and I’m grateful for the opportunity to be here. My expertise as a psychiatrist is, we’ll come in a little bit, and I’m also somewhat an expert in evolutionary biology and psychopharmacology, I’m not going to talk about that stuff very much. What I really want to talk about to begin with is that I am totally sick of the cat fights, the undermining, the catty undermining, the fratricide, the cannibalism, and the general conflict in the left that has plagued me and the movements in the left ever since I’ve been involved since the 1960s. I’ve had more trouble organizing demonstrations and things from the young Trotskyites than I have from the military.

The left tends to eat itself. And academics tend to eat themselves as well, and I’m totally sick of and refuse to talk about, unless it’s way after dinner and some drinks, I’m really not going to talk about the nature of human nature; I’m not going to talk about sociobiology versus post-modernism; I’m not going to talk about psychopharmacology versus psychotherapy. I’m absolutely sick of the way that paradigms make woggle-bugs fight with one another, and I don’t think we need to do that. So my purpose tonight is to try to bring us together, understanding that we each come from very different perspectives, and we could argue about sociobiology and evolutionary psychiatry and memes and genes and human nature and all that, but I’m deathly sick of it and I don’t want to do it. I want to talk about ways to move this movement forward, and here’s what I want to teach you.

I want you to realize that we’ve been talking about people in this meeting. And to be honest, I’m a little sick of people too. There are 10 to the 20 species of animals on this Earth, of which we represent one. There are 975 species of beetles in Costa Rica. When we begin to talk about omnicide, we are talking about killing 10 to the 20th creatures, some of whom are sentient beings. Not just cats and dogs and whatever, Cecil the lion’s offspring will be vaporized. The ivory trade, all of the elephants. We’re talking about every living thing.

And so, it seems to me that we have to broaden the dialogue here that omnicide doesn’t just mean our esteemed race. We made the bombs, we get to blow things up. But really, we’re talking about responsibility for an entire ecosystem that’s much bigger and much more complicated than we can imagine. And at the very end, I’ll introduce you to my favorite microbe, which may be the solution to our entire question for this meeting.

Alright. So the song I want people to sing together with me, you may know it from school or you may know it from summer camp. It’s called “All God’s Critters.” And it goes: All God’s Critters got a place in the choir, some sing low and some sing higher. Some sing out loud on the telephone wire and some just clap their hands, their paws or anything they got now. Woo!” Any of you know this song?

Listen to the bass, it’s the one at the bottom where the bullfrog runs and the hippopotamus moans and groans with the big to-do and that old cow just goes moo. The dogs and the cats they take up the middle where the hummingbirds hum and the crickets fiddle, the donkey brays and the pony neighs and the old coyote howls. Listen to the top where the little birds sing and The melodies with the high notes ringing. The hoot owl hollers about everything and the neighbor disagrees. Singing in the nighttime, singing in the day. The little duck quacks and he’s on his way. The possum ain’t got much to say and the porcupine talks to himself. It’s a simple song of livings on everywhere by the ox and the fox and the grizzly bear, the grumpy alligator and the hawk above, the sly raccoon and the turtle dove.

So, I feel that that’s our responsibility, really. Beyond the 7 billion people on the planet and we have to be very serious about it. So, I began to play the cream of mushroom soup game and one of your handouts is called “Psychological Obstacles to Nuclear Zero or Even to Nuclear Reductions for the Nuclear Age Peace Foundation Retreat”, by Judith Lipton and David Barash.

On this list are 50, count them, 50 potential paradigms for obstacles to nuclear zero. They were what I could throw up on the bulletin board. They were what occurred to me as I was playing the cream of mushroom soup game. And everyone here in the room could play the cream of mushroom soup game and add to this and add different paradigms and play with the paradigms, because my conviction is that each person, whether it’s a plumber, a gardener, an equestrian, somebody who grows orchids, everyone has something to contribute. All God’s critters got a place in the choir. All these people have a place in the choir. And our job is not to confine ourselves to the elite intellectuals who read the Bulletin of the Atomic Scientists and the FAS and the ACA. I mean, I’ve been doing that. I can talk the language.

But that’s not what’s going to make change. We have to get out to like plumbers for social responsibility, because nuclear war is really bad for the construction industry. Boeing has a union that builds equipment, not for the bombers, but literally like their desks, and their furniture and other stuff. Those Boeing workers can be brought together, because nuclear war is bad for their income. It’s a general call. So, I wanted to mention to you… Yes. I told you that there were 950,000 species of insects, 390,900 plant species known to man, and at the end of your handout is what I think is the cutest animal in the whole world and maybe the solution to the problem of nuclear war. It’s under… It’s either XX… Oh, XX and XY.

I don’t know if any of you have ever seen a tardigrade. A tardigrade is a micro-animal, it’s about 0.5mm and they look like this. This is electron. They have little snouts. They live everywhere. They live on the external parts of spaceships. They go down to -2 degrees Kelvin and up to 350 degrees Celsius. When they’re not happy, if they don’t get what they need, they turn into what are called TONS, T-O-N-S. TONS from tardigrades have been found in Shakespeare portfolios and things. All you do to get them to turn back to tardigrades is you add water and then they fluff up and become happy tardigrades again. You can find them in moss all over the world and in the bottom of volcanoes.

One of the theories of the world is that the tardigrades have come and are taking over the planet and that eventually we will in fact be extinguished, because the tardigrades are more adaptive. So I wanted to introduce you to the tardigrades, because I think they’re so cute and think that as long as we’re talking about putting crazy ideas up on the wall, why not tardigrades?

In the other parts of the handout, again because I’m a doctor, I think in terms of triage and I think of long-term solutions. There is a part in here about triage, about immediate steps to reduce the threat of nuclear war. I think one of the biggest immediate threats to reducing the threat of nuclear war is nuclear fundamentalism that says, “If we can’t get to zero, it’s not worth anything.” I apologize to the Nuclear Age Peace Foundation and if you want to send me home, that’s okay. I think we should not let the best be the enemy of the good and that there are immediate steps that can be taken now, stat! , to reduce the risk of nuclear war this year. This moment. Tonight. I made a list of those. But again, I’m not a woggle-bug, so my list may be woefully inefficient. And then finally I made a list of where to go from here. There’s a first aid emergency measure list. There’s another list in here about suggestions for where to go for the future. Some of the suggestions have already been mentioned, like media and youth and things like that.

But I think that there have to be much more aggressive academic approaches that transcend the normal bureaucracies within our departments and cause us to fight with each other because we don’t agree about our paradigms. We have to gang up on our department chairmans and say, “Nuclear war is bad, whether you’re a psychoanalyst or a psychopharmacologist or a sociobiologist or a postmodernist.” It doesn’t matter. We need to get this on the agenda. So academic approaches, labor and union approaches, and finally and many media… Oh, yes, and direct action.

I have one controversial suggestion, which is that I was thinking that perhaps Russia, NATO, Israel, India, Pakistan and China could blow up one bomb that was well-televised somewhere. Just do it. People have forgotten what nuclear explosions look like. The pictures are old, they’re black and white. And I think if it were possible for the nuclear countries to come together and just do one 10 kiloton bomb somewhere, but in really good Technicolor, with good, good, video. I think that that might be quite an eye-opener for people. So that’s my, I suppose, most controversial suggestion.