This is the transcript of a talk given by Richard Falk at the Nuclear Age Peace Foundation’s symposium “The Fierce Urgency of Nuclear Zero: Changing the Discourse” on October 24, 2016. The audio of this talk is available here. For more information about the symposium, click here. 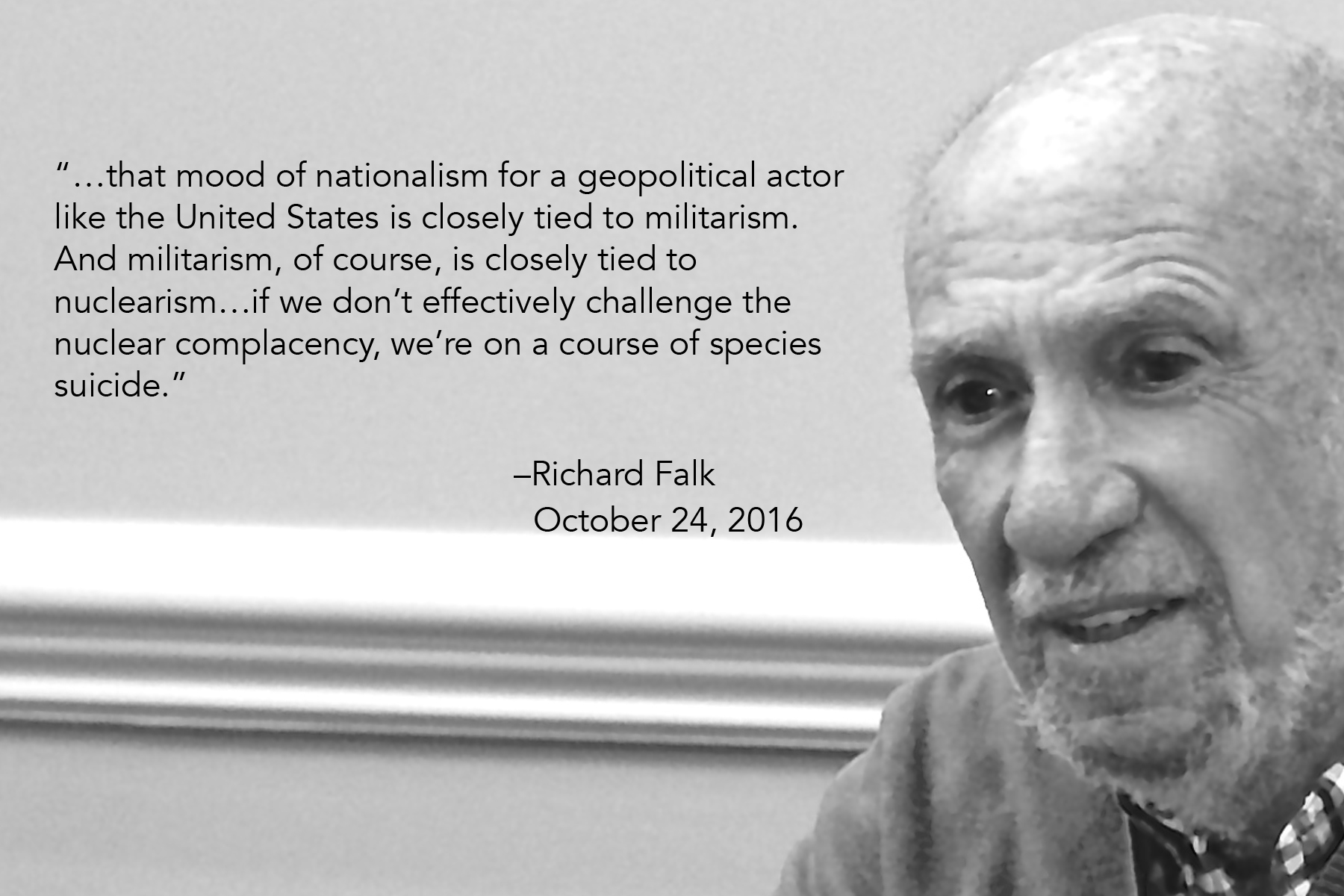 Let me say what others have said, that it’s a great privilege to be part of this symposium and this group. And I want to start by reinforcing a couple of things that Rich put before us. I think it’s not only a geopolitical moment generated by a resurgent nationalism, but it’s also a kind of perverse political moment, in which autocrats are being elected to lead most of the critical governments in the world. And we’re living in an age of what I’ve sometimes called the ‘popular autocrat’. Not only are they elected to actually diminish democracy, but they remain popular after they do that. The most extreme example is in the Philippines, where a really quite openly fascist leader, who takes pride in executing people without any foundation is wildly popular in the country. But it’s true in India, in Japan, in China, as in Russia, Turkey, Eastern Europe, and more and more countries, and we have the Trump phenomenon and Brexit, they’re all out in that domain, which is also characterized by elites being out of touch with the feelings of the people of their own societies.

The Trump phenomenon is an illustration, but it happens in many other places in the world in a similar way, where the people that think, well, who are the political class, to use that terminology, really don’t understand what is animating their own citizenry. And that contributes, I think, to this toxic interaction between an anti-democratic mood that is re-embracing the Westphalian idea of territorial sovereign states. And of course, that mood of nationalism for a geopolitical actor like the United States is closely tied to militarism. And militarism, of course, is closely tied to nuclearism. And so, we’re in a context, which seems to be extremely averse to the goals of this foundation and of this symposium. And I think, the dialectical challenge to that interpretation was, I think, highlighted by the presentations we had just before lunch, which suggest that if we don’t effectively challenge the nuclear complacency, we’re on a course of species suicide.

In other words that… And what makes this so daunting is, as I think, Steven made very vividly clear, is that we do have the scientific basis for a rational adjustment to these threats. We have an elite and a politically dominant climate that resists that kind of message, because it challenges the prevailing paradigm for how security is to be achieved, and why we need to rethink what we mean by strategic stability. I was stimulated in that direction by Hans’ presentation this morning to feel that, if we really take these threats seriously, strategic stability means something very, very different than what it means in the Beltway, and in other governing circles around the world.

So, on the one level, you have the challenge of the unacknowledged apocalyptic consequences of an outbreak of nuclear war. And that is coupled with the realization that there are several geopolitical contexts of encounter that could easily escalate into a hot war, and in a hot war, easily cross the nuclear threshold. And it’s significant in this, in a sort of symbolic sense, that President Obama was pressed, you probably recall, recently to endorse a no-first-use pledge. And he rejected that, which I think was an opportunity on his part to re-establish the nuclear taboo, which I think is being undermined by these geopolitical developments. And the fact that he was under the kind of governmental and military industrial complex pressures that didn’t allow him to do that, or led him to believe that he shouldn’t do that, is indicative, it seems to me, of the adverse climate that exists within the US government and is shared to a significant degree by what we know about the other nuclear governmental elites.

An additional problem that I have, and it may be provocative for some of us here, is I have for quite a long time felt that there’s a tension between the sort of world view and stability that the arms control community seeks to achieve, and the transformative vision that those that endorse nuclear abolition or nuclear zero seek to achieve. They’re not compatible, and yet they’re treated as if they’re compatible. And the reason they’re not compatible is that the more success one has within the arms control paradigm, the less necessity there seems to be to take the risks of altering that paradigm. So if you can stabilize… And I think the existing leaderships in the most countries have adopted this managerial consensus, it’s given an academic gloss by scholars like Joseph Nye and Graham Allison, that this is the best you can do. And the best you can do is a combination of pursuing stabilizing measures, plus a geopolitical enforcement of the non-proliferation regime.

That’s a very important element in this managerial worldview. And it’s not enforcing the Treaty, because the Treaty, of course, as we all know, has a disarmament provision. But in the geopolitical understanding of non-proliferation, that Article X is excluded, it’s basically seen as irrelevant. And so, what this geopolitical regime involves is first of all the prevention of any political actors who are seen as hostile to the broad international status quo from acquiring nuclear weapons.

Israel is the most famous exemption, and someone referred earlier to India and Pakistan also. They were for various reasons not seen as hostile. Iran, on the other hand, the West is ready to go to war to prevent acquisition of nuclear weapons, even though, as Noam mentioned, I think last night, they don’t pose any kind of threat beyond trying to establish deterrents for themselves. That’s really if they were to acquire nuclear weapons, that would be their role in that. So that the managerials’ status quo involves the geopolitical enforcement of the NPT, possession and continuous development, modernization of the arsenals at a level where they are not too expensive and they don’t have too great risks of accidents or unwanted access, and also a realization that having nuclear weapons gives you a certain status, psycho-political status within the world system.

And it’s not coincidental, I suppose, that the five permanent members of the UN Security Council were the first five countries to acquire nuclear weapons. So there’s a kind of correlation in the political consciousness between international status and having this kind of weaponry of mass destruction. So it comes back to this question of; what can one do given this understanding of the existing situation, which on its face seems discouraging, to awaken enough of the public to create political traction to challenge nuclear complacency. How do you gain that political traction? And I think two critical audiences are youth, and somehow trying to penetrate the media. And the media, broadly conceived, is including film, and tv and radio. But somehow, which is difficult to do, because the media in particular has become corporatized and in its own way deferential to the managerial consensus. So it would be, it’s not an easy thing to do.

The final point that I would try to make is that the US has a double or triple distinctive relationship to these, to this challenge. First of all, as Obama pointed out at Prague, it’s the only country ever to have used these weapons, and it has sustained a position of technological dominance in relation to the weaponry ever since 1945.

Secondly, it is the main architect of a global militarized global security system that includes foreign military bases, navies in every ocean, the militarization of space and the oceans. So the US, we’re not living in a unipolar world, but there is a kind of control over the global security structure that no other country is in a position to challenge except… And even then in a very precarious way the regional dominance, in other words, China wants to have a kind of parity within its region. And that’s seen as provocative from the perspective of this global security system.

And the same thing Russia’s… Part of the reason Russia is perceived now as being provocative is, it wants to play a role similar to what it did during the Cold War in the Middle East. And that’s, again, a threat to this globalization of the American domination project and the American-led security system. So then in that sense it seems to me one needs to revitalize the language of the preamble of the UN Charter as if we meant it. This time as if we meant to save succeeding generations from the scourge of war, and that relates to this idea that you can isolate nuclear weaponry from this larger context of a militarized security structure.

And therefore, what Jackie was saying this morning about the need to take into our understanding the linkages to conventional weaponry, and the vulnerability that many countries will feel toward American conventional superiority is something that is, I think, part of what any kind of awakening process involves. But underneath all of this is what do we do to awaken first of all the American public sufficiently to gain political traction to challenge nuclear complacency.