Nuclear Weapons Use in South Asia 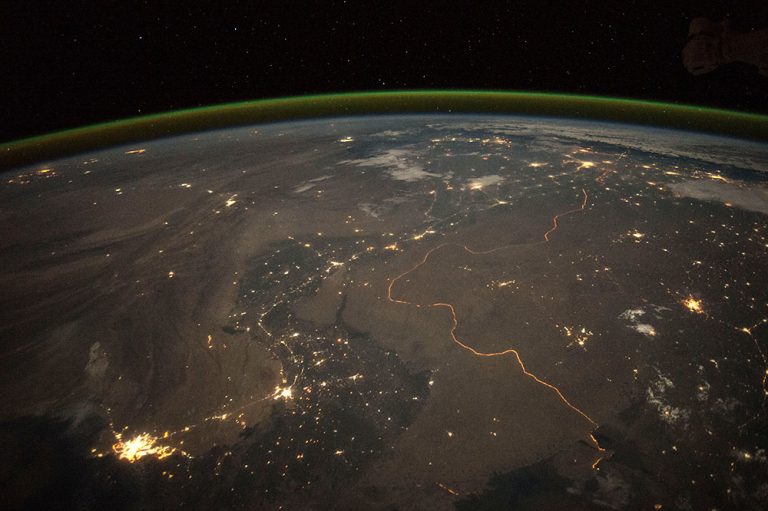 The image above was taken by an astronaut. The bright yellow line snaking up the middle is the border between India on the right and Pakistan on the left. The bright shiny spot way at bottom left is the city of Karachi, population roughly 20 million. Imagine the distance from that city of 20 million people to the border with India (it is at most a few hundred miles). It would take a missile three hundred seconds to fly from an Indian military base to a target in Pakistan and vice versa. By the time Pakistan or India knows that the missile is coming, the better part of a hundred seconds is already gone. That leaves you two hundred seconds to figure out what’s happening. Is it real? What do we do? Who decides? Two hundred seconds. You can almost hold your breath for that long. Almost.

The Indians and the Pakistanis have tried to put in place systems to manage decision-making about nuclear weapons, but those systems are completely removed from reality. On paper, they have very proper procedures about who will be the members of the committee that will decide whether to launch a nuclear attack. Those committees are chaired by prime ministers or their designated appointees; they include cabinet ministers and generals who are supposed to decide collectively. But could you gather them together or even on the phone in two hundred seconds in the middle of the night in a crisis situation?

In the Pakistani case, the fantasy of having a prime minister chair the committee that will decide about the use of nuclear weapons beggars belief. In any committee where the prime minister of Pakistan and the chief of the army sit at the same table, it will not be the prime minister who gets to decide. Pakistan has had three periods of military dictatorship, and those periods of military dictatorship saw the beginnings of nuclear program in the 1950s and 1960s, the achievement of a rudimentary nuclear weapons capability in the early 1980s, and the establishment of a large nuclear arsenal with an array of missiles in the early 2000s. The Pakistan army is used to being in charge of everything that matters when it comes to warfare, and prime ministers know to get out of the way.

The Pakistani plan for the use of nuclear weapons is the first use of nuclear weapons as a deliberate strategy. Their nuclear strategy is that if they are in a war with India, they will turn a conventional war into a nuclear war as soon as they fear they are losing the conventional war. And Pakistani decision-makers expect to lose, unless there is international intervention, because the Indians have more soldiers and more tanks. The Indian response to this has been that if Pakistan uses nuclear weapons against their soldiers anywhere, including on the Indian side of the border, then they will launch massive retaliation. The Indian position is not that they will use nuclear weapons first, but that if those weapons are used against them, the Indian response will not be proportionate. If you attack our soldiers, then we destroy your cities.

I recently debated a retired Indian vice admiral who had been in charge of India’s nuclear weapons and asked him about the following scenario. Suppose that Pakistan uses a nuclear weapon against some Indian soldiers and tanks in the desert because Pakistan thinks they are going to lose the battle here. Is India going to massively retaliate against Pakistani cities? Is India going to kill millions upon millions of civilians because Pakistan kills some soldiers and destroys some tanks? (Nuclear weapons, by the way, are not very good at destroying tanks.) He said, yes, we will destroy Pakistani cities because that is the only way to deter.

Where did this insanity come from? It began when the United States was trying to recruit allies in the Cold War. Indian leaders said no. The US then asked Pakistan’s leaders to become allies, and they agreed, in exchange for guns and funds. The US sent both. In the 1950s, the US expected the next war to be against the Soviet Union and to go nuclear. The US military sent a Nuclear Warfare Team to Pakistani military training academies to teach them how to fight a nuclear war. American military planning in the 1950s for the fighting of the next war envisaged the early use of tactical nuclear weapons against Soviet forces, because of the belief that the Soviets would overwhelm the US in any conventional war.

Little has changed. Now, instead of relying on American nuclear weapons, the Pakistanis have built their own and plan to use them based on the lessons that the Americans taught them so long ago. The Pakistani military will control decision-making on the use of nuclear weapons in South Asia. Because India has overwhelming conventional force, its stated policy is against first use of nuclear weapons. The Indian military by and large doesn’t particularly like this idea. They want to be able to go first. But Indian politicians have held the line against first use, at least so far.

Until the United States changes how it thinks about nuclear weapons, it’s very hard to imagine any other nuclear-weapons state rethinking its position on their use. If you are an anti-nuclear activist talking to leaders in Pakistan or in India they will tell you, look, if the Americans think they need nuclear weapons, surely we do; if the Americans think that they need to use nuclear weapons first, then surely we should be able to do so too. The future of nuclear decision-making in all the other nuclear-weapons states hinges on how the United States begins to think about changing its policy.