Yasuyoshi Komizo, Chairperson of the Hiroshima Peace Culture Foundation, delivered this speech in the Marshall Islands on March 1, 2014, as part of Nuclear Victims Remembrance Day. 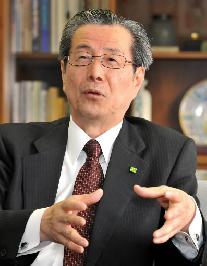 First of all, on behalf of the citizens and city of Hiroshima, I would like to reiterate our profound gratitude to H.E. Mr. Christopher J. Loeak, President of the Republic of the Marshall Islands, for his recent visit to Hiroshima on 15 and 16 February 2014. President Loeak visited Hiroshima despite the heavy snow storm that forced commercial flights to be cancelled. We are deeply moved and profoundly grateful for the strong sense of commitment to peace and humanitarian solidarity expressed by President Loeak not only by his words but also by his deeds.

During his visit to Hiroshima, an invitation was made to our city to participate in this important event here in Majuro to mark the 60th anniversary of the Castle Bravo nuclear test. The City of Hiroshima accepted this kind invitation with honor and gratitude, because we share the memory of the indescribable horror of the inhumane consequences of nuclear weapons; we share the painful loss of loved ones; we share the deep pains of devastation and loss of our beloved homes and community we cherished so much. And above all, we share the unshakable will to reconstruct our society, culture, economy and environment. We have never lost our human dignity and strong bonds of humanity. We shall continue to work together with you toward building a peaceful world without nuclear weapons.

At 8:15 on August 6, 1945, the first atomic bomb in the history of mankind was dropped on human population in Hiroshima. In a moment, the entire city was reduced to ruins, and 140,000 precious lives were lost.

Even for survivors, lives were permanently altered. Under harsh, painful circumstances, the “hibakusha“, atomic bomb survivors, have struggled with anger, hatred, grief and other agonizing emotions. Suffering with aftereffects, over and over they cried, “I want to be healthy. Can’t I just lead a normal life?” The suffering of the hibakusha continues to this day almost 70 years later, while Hiroshima has become known as the city of water and greenery with a population of over 1,180,000. To the eyes of the hibakusha, the nuclear weapon is the ultimate inhumane weapon and an absolute evil.

Having lived through unimaginable sufferings, the hibakusha have arrived at their profound humanitarian conviction that “no one should ever again suffer as we have.” Based firmly on this conviction, they have earnestly been appealing for the realization of a peaceful world without nuclear weapons. They plead that every person, without distinction, has a right to live a good life. We shall all work together to create peace.

Even with the average age surpassing 78, the hibakusha have never ceased promoting this humanitarian appeal for peace. This is remarkable because it is not a message of revenge, but a very important unifying call of deeply humanitarian nature. This precious and powerful message should be solemnly shared by all of us who live in today’s world. And I believe that it has a special significance as a rich source of inspiration to the youth who are about to build the future world in their own vision and efforts.

In order to create a rising tide of humanitarian efforts toward building a peaceful world without nuclear weapons, the mayors of Hiroshima and Nagasaki took initiatives to establish Mayors for Peace in 1982. Current membership has expanded to over 5,900 cities with the total population of approximately 1 billion citizens in 158 countries and regions, including Majuro and Bikini Atoll. As a group of mayors with a strong sense of responsibility to guarantee the safety and welfare of citizens, Mayors for Peace has inscribed deep in their heart the spirit of Hiroshima and Nagasaki for peace and is aiming for nuclear abolition by 2020.

As Secretary General of Mayors for Peace, I welcome that the world community is finally focusing on the harshly inhumane reality of nuclear weapons, and discussion is proceeding also at the governmental level. As a concrete step towards the nuclear abolition, Mayors for Peace is campaigning for a nuclear weapons convention. We also acknowledge various other approaches and measures for nuclear disarmament as they are complementary. We also place high priority on raising awareness for peace across a wide range of civil society, because it creates a sound basis for world leaders to take bold steps for peace.

From the standpoint of humanity, we appeal to all our fellow human beings that we shall never again allow nuclear weapons to be used. The only secure way to prevent the use of nuclear weapons is to abolish them. The need to achieve a world without nuclear weapons that will be sustainable over the long term compels us to build a society in which mutual distrust and threats are replaced by a shared sense of community, rooted in an awareness that we all belong to the same human family. In such a society, diversity will be treasured and disputes will be resolved through peaceful means. The road to this goal may be long and difficult, but it is certainly achievable, and we must proceed with determination. This sense of global community can support a new type of reliable international security, doing away with the threat based “nuclear deterrence” and will ultimately become the basis for lasting world peace. In this process to be free from the danger of nuclear weapons use, we ask world leaders to put in place concrete policies, frameworks and confidence-building measures to promote international and regional peace and security.

On our part, we shall spare no effort to work together with you towards the realization of a peaceful world without nuclear weapons. Equally, whatever the source of radiation may be, we must do everything we can to prevent any more hibakusha anywhere.

Lastly, I sincerely pray for the citizens of this beautiful part of the world, who have experienced unthinkable hardship through the aftermath of nuclear weapons tests, to enjoy a peaceful life more than anyone and anywhere else – one of compassionate human spirit, robust health, dynamic culture, and filled with smiling faces of neighbors who live in harmony.

Thank you very much!