Federal regulators are launching an investigation into reports of an inappropriate shipment of “special nuclear material” from the Los Alamos National Laboratory (LANL) that took place two weeks ago. The shipment, most likely containing isotopes used for nuclear explosions, was sent via commercial air cargo services to Lawrence Livermore National Laboratory in California and the Savannah River National Laboratory in South Carolina. A National Nuclear Security Administration (NNSA) official, Lt. Gen. Frank Klotz, charged that it was “unacceptable” to ship such material by air because of the dangers caused by pressure changes, the explosive result of which some scientists have likened to flying with a ball-point pen. 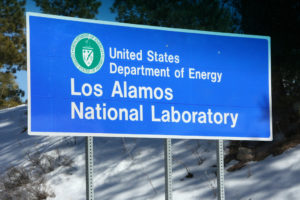 This security scandal is just the latest in a long history of safety missteps by the Lab, which has motivated the Center for Public Integrity (CPI) to launch a year-long investigation into its reported “climate of impunity” on plutonium pit production (you can read the Washington Post’s series reporting on the issue). The investigation was spurred by a 2011 incident involving the careless placement of plutonium rods too close together — a mistake that could have sparked the release of criticality-produced radiation, which has previously caused the death of three scientists at LANL alone. Luckily, catastrophe avoided the facility in 2011, though serious consequences followed. The acting head of NNSA at the time, Neile Miller, immediately shut down the PF-4 building at LANL (the site of the incident) and almost every safety supervisor at the facility left their post in resigned exasperation. CPI’s investigation has uncovered the previously shuttered culture of negligence systemic in LANL’s operations, a finding surprising to many when considering the sensitive material the Lab handles.

A relic from the Manhattan Project, LANL is the only U.S. lab that produces plutonium pits (fissile cores of nuclear weapons that, when imploded, initiate thermonuclear detonations). Though the Lab regularly handles plutonium and inspects the U.S. nuclear arsenal, LANL managers have consistently struggled to meet even basic safety standards. James McConnell, the top NNSA safety official, commented on the Lab and its managers at a public hearing in Santa Fe on June 7, stating that “they’re not where we need them yet.” Even former president of the American Nuclear Society Michaele Brady Raap candidly remarked that “there are a lot of things there [at LANL] that are examples of what not to do.” If these safety oversights are so glaringly obvious to even the most senior nuclear safety officials, what has allowed this system to persist? Like many factory operations involving contractors, the answer lays in the profits.

LANL is operated by a consortium of contractors — most notably by the firm AECON, which bought the previous contractor URS in 2014. Needless to say, CPI’s report confirms the contractors’ prioritization of profit over safety when it comes to plutonium pit production at the Lab. Congress has placed a large burden on the shoulders of LANL’s scientists through the 2015 National Defense Authorization Act, which mandates the production of 80 pits per year by 2027. To achieve this incredible rate, managers have imposed lax penalties for worker safety risks and have encouraged technicians to cut safety corners. Accidents have been, until now, largely unpublicized. In addition, the Waste Isolation Pilot Plant (WIPP) where LANL stores its nuclear waste experienced an underground barrel rupture, initiating a three-year shutdown and leading to questions on where LANL’s waste will go. To top it off, the Laboratory sits on an active seismic zone that is a few thousand years overdue for a considerable earthquake. Such a shock could bring materials in the Lab to critical status, dispersing lethal particles to nearby communities.

These disturbing conditions are hardly setbacks for the Lab’s contractors, who field earnings despite major safety breaches: after the 2011 crisis, the government paid contractors $50 million of taxpayer money. And the profits don’t plateau there. Congressional legislation requires that LANL continue to produce plutonium pits even though there is no technical need in the stockpile (15,000 plutonium pits — each lasting about a century — are currently stored near Amarillo, Texas). This quantity is well beyond U.S. warhead maintenance needs; in fact, future plutonium pits are tentatively intended for use in an “interoperable warhead,” an undeveloped weapon that could theoretically act as both a land-based ICBM and a submarine-launched nuclear warhead. The warhead would cost an estimated $13 billion, plus the cost for plutonium core production of $100 million. Those spell large sums for contractors setting their sights high, even on weapons that the military doesn’t want and that can’t be tested due to international nonproliferation consequences. Contractors not only manage the overall business machine for plutonium pit development, but they are also the lab directors overseeing day-to-day operations. This inarguable conflict of interest is what divides security priorities and production quotas. Lab safety has been thrown to the desert wind as contractors seek out profits by continuing the demand for plutonium pit production despite the exorbitant costs to our national budget and the blatant lack of actual need. This discrepancy forms the root of the systematic safety protocol violations at LANL.

In the wake of the CPI investigation, both the NNSA and LANL management have issued statements announcing the renewal of the Criticality Safety Program: Lab manager Craig Leasure ended a LANL internal memo by asserting, “safety is our top priority and as a result our plutonium facility is safe, even if that impacts programmatic timelines.” Though the shutdown of the PF-4 facility in 2011 completely halted nuclear weapons testing and plutonium pit production for 4 years, some functionality has returned recently. Management predicts a return to 100% functionality of the PF-4 facility by the end of this year. Plutonium pit production will continue to strive for the outlandish goals set by Congress, propelled forward by contractors striving to meet those quotas at any cost. The $2.2 billion contract to manage LANL ends in 2018 and the NNSA has just begun the competition to find the next firm — some see this as a real opportunity to enact effective changes at the troubled lab. Though the realignment of safety priorities at LANL is a promising response to the recent spotlight, it is difficult to foresee the implementation of any real change in a system already plagued by a culture of mercenariness.