Not Just Apologies but Repentance 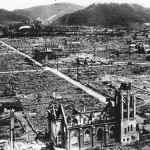 This article was originally published by Hiroshima Peace Media Center.

In a press conference last week Tomiichi Murayama, the soft-spoken, elegant former prime minister of Japan urged his country’s current leaders to honor, on this 70th anniversary of the end of WWII, the nation’s past apologies. Murayama, whose independent streak may come from his origins in the laid-back, distant Prefecture of Oita, is among the last living politicians, to have personally experienced the Pacific War. Of his 1995 statement of contrition, still the official benchmark for recognition of Japan’s war-time aggressions, he has said that it was not merely an apology but a pledge — a pledge to think about the past, to admit historical facts, and to “not repeat mistakes.”

Last month some 460 mostly Western scholars of Asian studies issued a letter of appeal, also urging the Abe Administration to uphold the truth of “Japan’s history of colonial rule and wartime aggression in both words and action.” Another statement, on the “Comfort Women” issue, was released by 16 associations of Japanese history scholars and educators.

These pleas are timely. An unsavory air of opposition-bashing has been spreading here for some time. The silence of authorities and independent observers may bolden or give legitimacy to those ready to criticize scholars, media outlets or ordinary citizens they perceive as not patriotic enough by their small-minded standards.

Nonetheless, frequently asking a single country to apologize tends to turn the gaze upon others, and the sight is hardly flattering: a roll-call of nations having admitted to or atoned for past wrong-doings falls pitifully short.

Most Western colonial powers have a stained record when it comes to apologizing for their colonial era plunders. Too many still make believe that their colonialism had less to do with greed and more with the spread of “civilization.” Quite a few still perpetuate the myth of “The White Man’s Burden.”

It took Belgium decades to face its shameful history in Africa. France has never formally apologized to Algeria nor Britain to India (neither has Britain apologized to China, for the 19th century Opium Wars, maybe one of the ugliest instances of state-sanctioned drug-trafficking). Netherlands waited a long time to apologize to its former colony Indonesia for mass executions in the 1940s and Indonesia itself had to be persuaded, to apologize to East Timor, which it had invaded and harshly misruled for almost 25 years.

It is quite unlikely that the Chinese Communist Party will ever apologize for the horrors of the Cultural Revolution. The former Soviet Union never apologized for crimes in Eastern and Central Europe and, maybe just as tragically, for crimes against its own people under Stalin. Turkey still struggles to recognize the Armenian Genocide. And we must collectively and for long apologize, for watching on as the horrors of genocide spread across Cambodia and Rwanda, a mere few decades ago.

The Iranian regime has yet to apologize for the arbitrary executions of thousands of opposition figures in the aftermath of the 1979 revolution. Israel claims that the great suffering endured by millions of Jews during the Holocaust somehow gives it carte blanche, to recognize no other suffering, especially not that of the Palestinians.

There is a long list of despotic, unrepentant rulers across Africa, Asia and Latin-America, who have never apologized for any of their misdeeds – a sadly crowded field.

Even the five permanent members of the Security Council, among themselves accounting for almost 80% of global arms exports, have yet to offer apologies to the rest of the human race, for failing to advance our collective peace and security or for achieving so little, as nuclear weapons states, to further the cause of nuclear disarmament.

But by any measure the leader of the no-apologies category, in a league all its own, must be the United States of America.

Few countries have been as mired in as much warfare within as brief a period of history as the United States. Since WWII, the number of revolutions, coups d’état, invasions and wars it has directly or indirectly instigated has been staggering.

The United States has yet to apologize for unleashing nuclear terror on civilians in Hiroshima and Nagasaki. Not only has there been no apology, but past governments have gone to extraordinary lengths, to convince a gullible public that the two atomic bombs saved a million American lives (notwithstanding historical research proving this story was promoted by a PR team after the bombings.)

Neither has it apologized for usurping Iran’s genuine democratic movement in the 50s, or for propping up so many unsavory dictators across Latin America in the 60s and 70s. It has not apologized for the death and destruction it wrought upon Vietnam — and upon tens of thousands of its own youth who fought the unjust, unnecessary Vietnam War. And it has yet to apologize, for destroying a country called Iraq, unlocking a Pandora’s Box of conflict across the Middle East.

Because George W. Bush and his top lieutenants have never apologized to the people of Iraq for the faked and failed 2003 invasion, and for bringing so much pain and suffering to so many, their lack of remorse and accountability has become impetus to further violence and injustice.

An apology may not be meaningful or even meant, but true repentance can be felt. When the Emperor of Japan recently visited Palau in the Pacific and stood, frail and bowing, in front of memorials for Japanese and American soldiers killed on those horrific battlegrounds more than 70 years ago, people understood the depth and sincerity of his gesture.

One of the most powerful apologies contained no words and took not even 30 seconds: it came from Chancellor Willy Brandt of Germany, falling to his knees at the Warsaw Ghetto Memorial on December 7, 1970. He later wrote in his memoirs “As I stood on the edge of Germany’s historical abyss, feeling the burden of millions of murders, I did what people do when words fail.” His historical gesture, repelled by many in his own country, became a turning point for German reconciliation not just with Poland but with the rest of Europe.

Any Israeli prime minister who will one day have the courage to stand on the rubble of a Gaza neighborhood, look into the eyes of its once-dignified residents and pledge to work to end their plight, need not apologize — just act on that sense of repentance and responsibility, to start making a historical wrong right.

The people of Hiroshima understood the significance, of both repentance and forgiveness, making theirs the rallying calls “To Forgive but not to Forget,” “Never Again” and “Transformation from a Military City to a City of Peace.” Without an understanding, of the invisible threads that weave together acceptance of sins and the struggle for forgiveness, could Hiroshima have stood today as a city symbolizing peace around the world? Every morning when bells toll in Hiroshima’s Peace Memorial Park at 8:15 a.m., the exact time of the atomic bombing, I am reminded, of how long this work may take.

The great Japanese Nihonga painter Ikuo Hirayama travelled numerous times to Nanjing, site of atrocities committed by the Japanese military in the 1930s, to help rebuild the old Nanjing City Wall. He made personal donations to China’s historic heritage and trained countless Chinese artists in restoration. A survivor of the Hiroshima atomic bombing himself, Hirayama once said “I started to create my artwork as a requiem for those who lost their lives in the war. The wish for peace is at the core of my work.” Hirayama needed no apologies — his very life embodied faith in the powers of responsibility and redemption. Upon his death in December 2009, the Chinese government stopped its criticism of Japan momentarily, to pay tribute to a great artist and a courageous ambassador of peace.

In the Nuclear Age apologies for historical wrongs are not some diplomatic niceties, to quickly offer and get over with. Rather, they should prod us to understand why we still live in such a violent world, spend so much money on arms or need 16,000 nuclear warheads — 2000 of them on trigger-hair alert – for our security. Why here, as in so many other nations, we have politicians who want us to believe that more warfare is the only way forward. And why, despite our great strides and achievements, we are unable to trust the powers of repentance and to solve our problems in a just, civilized manner. The stakes, of not understanding, have never been so high.