This article was first published by A New Map. 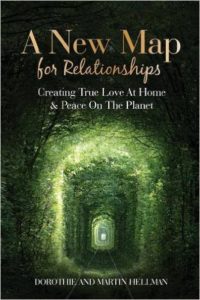 Earlier today, North Korea conducted its fifth and most successful nuclear test, with an estimated yield close to that of the bomb that destroyed Hiroshima. This dangerous and deplorable situation was predictable—and probably preventable—as noted on page 197 of my wife’s and my book, A New Map for Relationships: Creating True Love at Home & Peace on the Planet:

If we continue to engage in regime change around the world and encourage it in North Korea via crippling sanctions, that nation’s leaders will maintain or increase their nuclear arsenal in order to deter such efforts. It’s a matter of self-preservation for them. Regime change probably would result in their being killed.

I have included a longer book excerpt immediately following my signature line. If you agree it’s time we got smart about ending nuclear proliferation, order a copy of the book—it’s now available from Amazon, Barnes & Noble, and many other booksellers—and then follow the suggestions in the section “A Call to Action,” which starts on page 271. Actions you can take right now include signing up for updates and alerts, and encouraging friends to read A New Map through Facebook, Twitter, LinkedIn, and other social media. One more thing: We need more reviews posted on Amazon. Thanks very much for any help you can provide.

EXCERPT FROM THE BOOK’S SECTION ON NORTH KOREA

By the end of this section, you’ll have seen how our failing to take in the bigger picture—failing to think holistically—played a role in North Korea building its nuclear weapons and is unintentionally encouraging that nation to expand its arsenal. …

As always, I’ll focus on places where our nation has power to improve what appears to be an impossible relationship—in other words, I’ll focus on mistakes our nation has made and therefore can correct. But my focus on our mistakes is not to excuse the many despicable acts committed by the rulers of North Korea. Rather, that focus recognizes that we do not have direct control over their actions, and scolding them tends to make them dig in their heels. I see it as a hopeful sign that we have options for improving relations even with a regime as abhorrent as North Korea’s. The sad part is that, thus far, we have squandered those options by allowing repugnance to override our national interests. …

My Stanford colleague and former Director of Los Alamos National Laboratory, Dr. Siegfried Hecker, has visited North Korea seven times on unofficial missions sanctioned by our government. In a 2010 paper, he gave his perspective on how the deal fell apart (emphasis added):

The Agreed Framework was opposed immediately by many in Congress who believed that it rewarded bad behavior. Congress failed to appropriate funds for key provisions of the pact, causing the United States to fall behind in its commitments almost from the beginning. … [In 2002,] the Bush administration killed the Agreed Framework for domestic political reasons and because it suspected Pyongyang of cheating by covertly pursuing uranium enrichment. Doing so traded a potential threat that would have taken years to turn into bombs for one that took months, dramatically changing the diplomatic landscape in Pyongyang’s favor. … We found that Pyongyang was willing to slow its drive for nuclear weapons only when it believed the fundamental relationship with the United States was improving, but not when the regime was threatened.

Hecker’s last sentence provides the key to defusing the Korean crisis. If we continue to engage in regime change around the world and encourage it in North Korea via crippling sanctions, that nation’s leaders will maintain or increase their nuclear arsenal in order to deter such efforts. It’s a matter of self-preservation for them. Regime change probably would result in their being killed.

Holistic thinking would require us to take in the perspective of North Korea’s leaders. We don’t have to like them, but we do have to understand them. If we were to consider their perspective, we would recognize that, as distasteful as the North Korean government is, encouraging regime change is not in our best interests, because it will lead to the North maintaining, and probably increasing, its nuclear arsenal. If we were to think things through more rationally, new possibilities would open up.

… in January 2015, North Korea offered to suspend nuclear testing in return for cancellation of the joint US-South Korean military exercises. Those war games started a month later, and North Korea conducted a nuclear test in January 2016. We don’t know if suspending our war games would have prevented that test. Only if we had taken North Korea up on its offer would we have useful information on whether or not the country’s leaders had been serious.