NAPF Peace Leadership Director Paul Chappell spoke on the principles of nonviolence at the second workshop on Building Nonviolent Indigenous Rights Movements on February 15, 2014 in Nova Scotia, Canada. Held at the Tatamagouche Retreat Center outside Halifax, and sponsored by the Wabanaki Confederacy and the Land Peace Foundation, this workshop also included special interactions from the Native community. 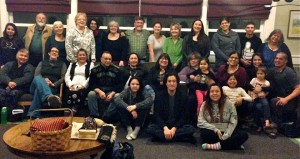 “The inclusion of more traditional and ceremonial elements into the Nova Scotia workshop, such as talking circles that were facilitated by prayer and ceremony, enabled us to deepen our dialogue with participants. By including more traditional elements, we were able to connect with each other in a more meaningful way,” said co-trainer Sherri Mitchell, Indigenous lawyer and Executive Director of the Land Peace Foundation.

Discussing the nonviolent tactics and strategies of Gandhi and Martin Luther King Jr., Paul Chappell expressed the importance of all people learning the truth of our shared humanity. He reminded the group how all of humanity has indigenous roots.

Indigenous peoples offer a unique contribution. Native activist Gkisedtanamoogk said,  “Native Americans are a success story because we have faced the longest ongoing genocide in history yet we are still here, and our ideals are still here. We are survivors, and we are not going anywhere. We will continue to protect our mother the earth, just as our ancestors did. Indigenous people used to be the only ones talking about our responsibility to protect the environment, and now I see that attitude spreading. I have witnessed this happening.”

His wife, Miigamaghan added, “People used to say that we were primitive, but now they are realizing that our highest ideals were simply ahead of their time.”

Chappell encouraged the participants. “By building on your powerful ideals and uniting wisdom from around the world, you have the potential to create a new peaceful revolution.”