More Than Profit Is at Stake in Modernization

A few days ago, the U.S. Air Force announced that it is seeking proposals from “industry” to replace its nuclear weapons and delivery systems. While the Air Force’s plans for nuclear weapons “modernization” aim to please the for-profit weapons industry, the stakeholders it should be considering are the people and the planet.

Will the people benefit from $1 trillion being spent on new nuclear weapons, delivery systems and production infrastructure?

Let’s ask Pope Francis. In a December 2014 message to the Vienna Conference on the Humanitarian Impact of Nuclear Weapons, he said:

Spending on nuclear weapons squanders the wealth of nations. To prioritize such spending is a mistake and a misallocation of resources which would be far better invested in the areas of integral human development, education, health and the fight against extreme poverty. When these resources are squandered, the poor and the weak living on the margins of society pay the price. 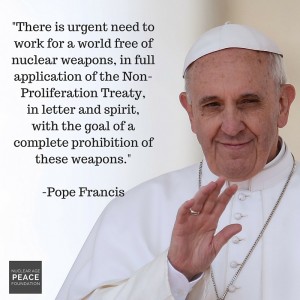 Now, $1 trillion over 30 years might sound like a lot of money to spend on nuclear weapons. That’s approximately $4 million per hour for three decades. However, we must also keep in mind that this is only the additional money that the U.S. will be spending to “modernize” its nuclear arsenal. It will also be spending money to maintain and deploy its systems, to the tune of tens of billions more dollars annually.

Also, the U.S. is not the only country engaged in nuclear weapons modernization. Russia, the United Kingdom, France, China, Israel, India, Pakistan and North Korea are all engaged in some level of modernization of their own nuclear forces.

Will the planet benefit from a new generation of nuclear weapons?

Let’s ask the people of St. Louis, Missouri, where an underground landfill fire is approaching buried radioactive waste created over 70 years ago during the Manhattan Project. Community members living near the West Lake Landfill have been organizing to have this extraordinarily dangerous issue addressed as a matter of top priority to the nation, but every day the uncontrolled fire creeps closer to buried radioactive waste.

There are many other sites in the U.S. that are similarly — and in many cases more — contaminated from nuclear weapons production. Again, the U.S. is but one of nine nuclear-armed countries, and sadly this legacy of environmental carelessness has played out all over the world.

Next time you hear an Air Force general or a member of Congress say just how urgent and necessary it is to modernize U.S. nuclear weapons, think about what they are really saying, and where their priorities truly lie.

Our collective future should not be held hostage by profit-driven corporations enabled by politicians who believe in the fantasy of indefinite global security through the threat of mass annihilation. As we reflect on the 71st anniversaries of the U.S. atomic bombings of Hiroshima and Nagasaki this week, we are offered a reminder of what nuclear weapons are really designed to do: indiscriminately kill hundreds of thousands of people in an instant.