Message of Support to the Stop Trident Demonstration in London 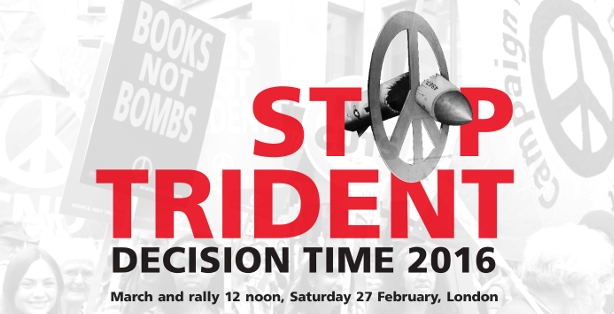 The Nuclear Age Peace Foundation is happy to support the tens of thousands of people in the streets of London demanding “Stop Trident” and an end to nuclear weapons worldwide. There is simply no excuse for the British government to go ahead with replacing the Trident nuclear weapons system. We know very well the extreme costs — financial, moral and environmental — that nuclear weapons bring. Thank you for standing up for current and future generations in Britain and around the world who would suffer greatly if a Trident replacement were produced and, even worse, used.

In less than two weeks – starting on 9 March – the International Court of Justice will hear oral arguments in a lawsuit filed by the Marshall Islands against the United Kingdom. The lawsuit claims that the UK is in breach of existing international law through its refusal to negotiate in good faith for an end to the nuclear arms race and for nuclear disarmament.