Letter to Secretary Mattis: Postpone the U.S. ICBM Tests During the Olympic Truce 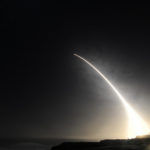 On February 2, 2018, the Nuclear Age Peace Foundation sent a letter to U.S. Secretary of Defense James Mattis. The letter called on Secretary Mattis to respect the Olympic Truce, which began on February 2nd in advance of the PyeongChang Winter Olympic Games.

The U.S. had scheduled two tests of its Minuteman III Intercontinental Ballistic Missile in the month of February, during the Olympic Truce period.

On the afternoon of Monday, February 5, the Air Force announced that it would be conducting the first Minuteman III missile test in the early morning hours of February 7. Just a couple of hours later, the Air Force cancelled the test with no explanation.

We were very pleased to learn of the decision by South Korea and the United States to postpone joint military exercises until after the official period of the Olympic Truce. It was with great alarm, then, that we read a January 11 article in Bloomberg indicating that the Air Force Global Strike Command has no plans to postpone two Minuteman III ICBM tests in February, also during the Olympic Truce.

Captain Anastasia Schmidt of Global Strike Command stated, “There are two launches currently scheduled for February that have been scheduled for three to five years.”

Regardless of advance planning, it is essential to global security that the United States be flexible and respect worthwhile initiatives for peace such as the Olympic Truce. The Air Force has postponed launches due to unfavorable weather conditions, technical problems, and other issues. There is no reason why the Air Force cannot, at a minimum, postpone these ICBM tests until after the designated weeks of the Olympic Truce.

If North Korea were to test an ICBM during the Olympics, many nations, including the United States, would view the act as provocative and threatening. One does not have to stretch the imagination too far to guess how North Korea might react to our testing of ICBMs during the same period.

For the sake of global stability and to honor the Olympic spirit, I urge you to postpone the February ICBM tests.