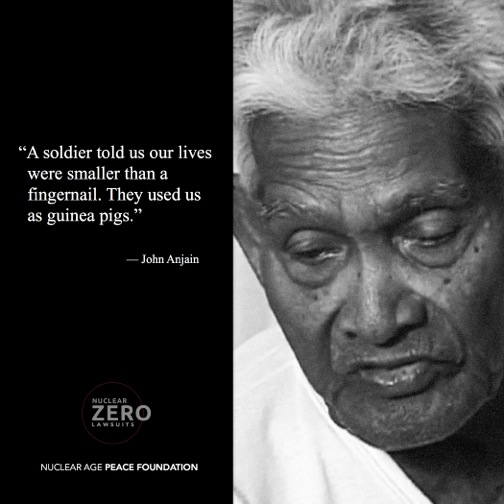 John Anjain was awake and drinking coffee on the morning of the Bravo nuclear test. What he first perceived to be a brilliant sunrise turned out to be something much more perilous. Following the initial brilliant light came smoke, scorching winds, and a lifetime of pain.

In his role as magistrate of Rongelap, John recalls warning people not to drink from water catchments as the water had a noticeable yellow tinge. He remembers trying to comfort those whose skin had blistered, whose vomiting wouldn’t stop and whose hair began to fall out in big clumps. Along with witnessing the suffering of his people, John faced tragedies in his own family.

Four of John’s children developed cancer attributed to radiation. John’s son, Lekoj, was one year old when the Bravo test occurred. He died 18 years later from myelogenous leukemia. Lekoj is officially recognized as the sole casualty of the nuclear tests, although John’s memory of countless miscarriages, cancer developments, and health complications contest this narrative.

John Anjain’s experience with nuclear testing led him to become a strong anti-nuclear advocate, both for the Marshall Islands and for the entire international community. For years, he appealed to the U.S. to provide aid for the radiation victims. He visited Japan many times to attend rallies and give lectures on nuclear disarmament. And he kept the only medical records of the Bikini Atoll nuclear test victims. At the time of the blast, John recorded the names of 86 victims. By 1997, 38 people on his list had died.

John Anjain passed away at age 81 in 2004. To this day, his memory survives in his endless work for the people of Rongelap and his impact on the anti-nuclear movement.