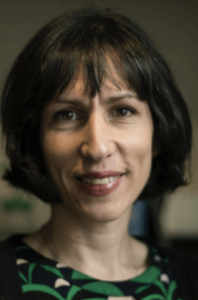 The Nuclear Age Peace Foundation (NAPF) has named Ivana Nikolić Hughes as its new president. Hughes comes to the Foundation from Columbia University where she is a senior lecturer in discipline in the Department of Chemistry, and where she served as the director of the K=1 Project, Center for Nuclear Studies.

Hughes graduated with honors from Caltech in 1999, earning a B.S. in chemical engineering, and completing her senior thesis with Frances Arnold, the first American woman to win a Nobel Prize in Chemistry.

In 2005, Hughes earned her Ph.D from Stanford University in the laboratory of the National Academy of Sciences, member Daniel Herschlag in the Department of Biochemistry, and was an American Heart Association Predoctoral Fellow.

“Ivana has a unique ability to eliminate distance. Whether talking to a Nobel prize laureate or a first-year undergraduate, she always provides undivided and benevolent attention,” said Pierre Cristofare, professor of Astronomy at the University of Paris, and a colleague of Hughes at Columbia’s K=1 Project.

“Among her numerous extraordinary capacities, this trait leads her to a very distinctive overview of any organization she has run or has taken part in. It also allows every member of her staff to feel highly supported, encouraged, and cared for.” Cristofare said.

“Moreover, I think that the main reason why she is often cited as a role model team leader is because of her absolute selflessness. It is clear that her entire action is driven towards others: her team members, her collaborators, or her university students, making sure each person on her staff or in her class succeeds and blossoms,” he said.

Hughes’s scholarly work focuses on the dangers of nuclear weapons and nuclear energy, and the environmental impacts of nuclear weapons testing in the Marshall Islands and elsewhere. She combines her interest in global issues with her commitment to engaging the younger generation on topics at the intersection of science and society, nuclear disarmament specifically.

“I have been interested in questions surrounding nuclear technologies —both nuclear weapons and nuclear energy — for more than 10 years. A particular focus of my work has been the environmental — and therefore the human — impacts of nuclear weapons testing, most notably in the Marshall Islands, as well as a broader interest in nuclear disarmament education.

“My work in the Marshall Islands was directly inspired by the NAPF initiative on the Nuclear Zero Lawsuits, brought to the International Court of Justice, in 2014. Helping the world to understand the environmental impacts and the human suffering caused by this horrific nuclear legacy has been deeply meaningful to me.”

On becoming NAPF’s president, Hughes said, “Joining the amazing community that is NAPF feels to me like coming home. Everyone has been so supportive, encouraging, and welcoming. For forty years, the foundation has been a beacon of light in a dark world that has seen crisis upon crisis with the threat of nuclear war looming over the whole of humanity.

“I couldn’t be more excited to advance the vision of a world free of nuclear weapons; my commitment to this vision is boundless. There is a gravity to the current moment of intertwined global crises that we must turn into an opportunity for creating a better world, one we will be proud to leave to our children and future generations.”

Asked about Hughes, David Krieger, president emeritus, said, “We are very pleased to have found a new president for the foundation who is knowledgeable about nuclear dangers, dedicated to the abolition of nuclear weapons and energetic in pursuing this goal. In addition, she has done considerable work with the Marshall Islanders and other victims of nuclear testing in the Pacific.

“We look forward to the new energy she will bring to the foundation and its goal of ridding the world of nuclear weapons.”

“Stepping into David Krieger’s shoes is an enormous responsibility and one that I take most eagerly and earnestly,” Hughes said. “David’s founding and leadership of NAPF was both visionary and transformational. I look forward to leading the foundation into its fifth decade and beyond.”