Interview on Civil Resistance at Vandenberg Air Force Base 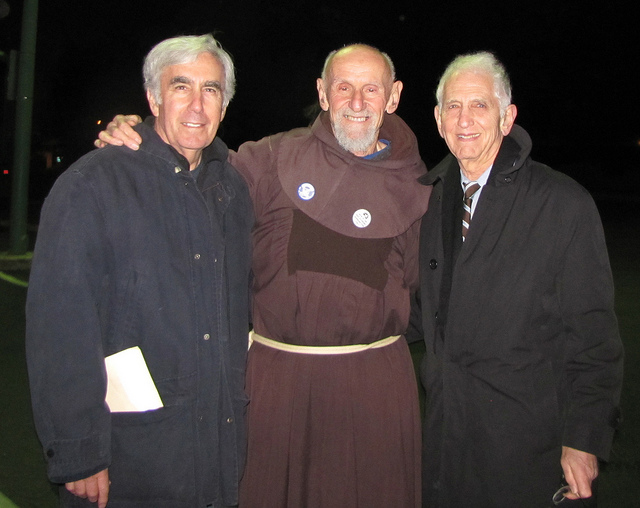 RICK WAYMAN: What made you decide after 30 years of working as President of the Nuclear Age Peace Foundation to get arrested protesting this missile launch?

DAVID KRIEGER: I felt it was necessary. The leaders in charge of our nuclear policies aren’t reacting swiftly enough and with serious determination to end the intolerable threat posed by these weapons of mass annihilation, and so more is needed from citizens. This is an action I took as a citizen, which I hope says to the members of the NAPF and to the public that more is needed – that words are not sufficient. We must speak with our actions as well.

It’s far past time that we stop accepting nuclear weapons as part of our national security strategy. Nuclear weapons do not make us more secure. They undermine the security of their possessors, and the security of innocent people throughout the world. What we know now from scientific studies is that the use of a few hundred thermonuclear weapons on cities would lead to putting smoke into the stratosphere that would block a significant percentage of sunlight from reaching the earth for 10 years or more. This would lead to crop failures and mass starvation that could result in the extinction of the human species and most other complex forms of life. How could anyone who cares about the future and cares about their children and grandchildren be indifferent to that?

RICK WAYMAN: How did you feel when you were approaching the green line and in the act of being arrested?

DAVID KRIEGER: I felt really good to be a part of a community of individuals willing to take risks to end the insanity of nuclear testing, nuclear threats and the ever-present danger of nuclear weapons use by accident or design. I also felt good to be taking this action with my wife and my good friend Daniel Ellsberg. Also Fr. Louis Vitale, who has set a great example as a religious and moral leader by being arrested hundreds of times for this cause; and Cindy Sheehan, a spirited woman whose son died in the Iraq War.

RICK WAYMAN: How were you treated during your time in detention?

DAVID KRIEGER: The young soldiers were like automatons – they were carrying out their orders to put handcuffs on us, search us and detain us, but they appeared to be ordered not to engage in conversation with us. For the most part, the soldiers were respectful, but the orders from their leaders left a lot to be desired; for example, after processing us, they dropped us off at 4:00 a.m. in an empty shopping center four or five miles from VAFB where our cars were located. This struck me as unnecessary harassment.

RICK WAYMAN: Do you know what penalties you’re facing?

DAVID KRIEGER: No. All I know is that they have charged us with entering military property and they told us we will be notified as to when we are to appear in federal court.

RICK WAYMAN: Do you intend to plead guilty or not guilty?

DAVID KRIEGER: My plan at this time is to plead not guilty by reason of necessity. I walked toward the base along with the others to try and stop a far greater crime, the reliance upon and potential use of weapons that can destroy cities, and potentially cause the extinction of complex life on the planet. With nuclear weapons we can do to ourselves what a meteor hitting the earth did to the dinosaurs. I hope that increasing numbers of people in the US and around the world will awaken to the necessity to speak out and act for nuclear weapons abolition.