A recent NAPF Peace Leadership Training held at the University of Massachusetts/Amherst found new advocates among those living in the inner cities. Young activists involved with Arise for Justice in Springfield learned from NAPF Peace Leadership Director Paul K. Chappell how to deal with anger and violent situations, and how to bring the principles of nonviolence into their lives. 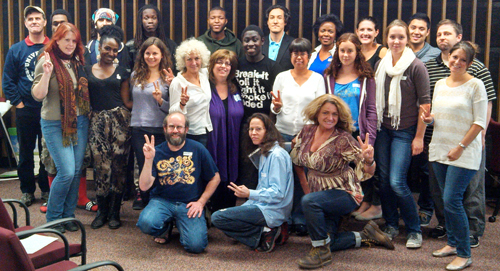 “I will improve my anger and condone nonviolence . . . They need to expand this workshop to places like Springfield because this workshop is perfect.” — Selassei Walker, 15

“I wanted to attend this workshop because it’s a great way to find peace within yourself and it just adds another tool to my toolbox for life. Now I will utilize everything I learned in everyday life and let other people know what I’ve learned . . .This is a great workshop that manyyoung people should hear about and be a part of.” — Corey King, 17

“I’ve learned how to react towards certain situations with the understanding of why violence happens and also how to express myself and which actions and expressions to do/not do during a conflict.” — Courtney Watkins, 20

“I will utilize what I’ve learned at Arise . . . Non-violence is our most powerful tool against corruption . . . Bring Paul to Arise!” — Frank Cincotta, 22

“I originally wanted to use the training, to use the tactics at work and everyday environment. I live in a very violent city and this training can be used to inform other youth how to deflate violent confrontations . . . This is something that should be held at local schools and areas where peace is a problem . . . I hope you come to Springfield, MA!” — Julia Scott, 27 (founder of one of the Arise youth groups in Springfield)

Within the next several months, Paul Chappell will be giving peace leadership trainings in Uganda, Canada and the University of San Diego Graduate School of Leadership and Education Sciences. Email Paul at pchappell@napf.org for more information.