Although peace activists know it well, the average American is “blissfully unaware” that the likelihood of a nuclear attack inside U.S. borders has markedly increased for two reasons: serious deterioration in relations between American officials and their Russian counterparts and potential development by terrorists of improvised nuclear technology. 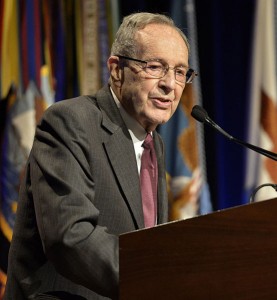 That was the warning delivered in November by William Perry, former U.S. secretary of defense, who told attendees in Chicago at the annual Clock Symposium sponsored by the Bulletin of the Atomic Scientists that intensified public information campaigns will be essential to enlighten a citizenry that’s become complacent and ignorant about the rising threat of catastrophe.

“Our first steps today must be education and activism,” said Perry, who led the Defense Department under President Bill Clinton between February 1994 and January 1997. Perry, 88, is now a professor emeritus at Stanford University, where he also is a senior fellow at the university’s Hoover Institution and the Freeman Spogli Institute.

The political relationship between the U.S. and Russia, nearly 24 years after the dissolution of the Soviet Union, has become just as hostile as it was during the Cold War, Perry told an audience of mostly scientists and students at the University of Chicago.

“How in the world could this have happened?” Perry asked, recalling that in the period following the fall of the USSR, American and Russian officials were amicable enough to jointly dismantle about 8,000 nuclear weapons, hold many diplomatic meetings and even engage in joint peacekeeping exercises.

To some extent, Perry blamed today’s Russian government leaders for producing soured relations. Russia has violated Ukrainian boundaries and embarked on a new, major build-up of its ICBM (Intercontinental Ballistic Missile) forces, nuclear submarines, and nuclear-capable bombers, he said, even as the U.S. is engaged in major, long-term modernization of its own nuclear technology.

Russian leaders, in addition, have made reckless statements regarding their government’s ability to use nuclear weapons as a tool of power, Perry said. Government-backed Russian news agency chief Dmitry Kiselyov, he recalled, said in 2014 that his nation “could turn the U.S. into radioactive ash.”

The statement was broadcast on TV, with Kiselyov situated in front of a photo of a mushroom cloud; it was a response to cautions from the Obama Administration that the Russians mustn’t try to annex Crimea.

Later in 2014, Perry said, President Vladimir Putin boasted that his country was “one of the most powerful nuclear nations” and should not be interfered with militarily. He indicated that Russia could rely on tactical nuclear weapons to counterbalance threats to its interests in Eastern Europe.

Perry also criticized Russia’s apparent rejection of a no-first-use policy governing strategic use of nuclear weapons. The Russian military more than 20 years ago said it might use nuclear weapons in response to a conventional attack that posed an existential threat to the country, negating a longstanding no-first-use doctrine espoused by Soviet leaders. More recent remarks by Russian leaders, though, have seemingly reconfirmed that officials no longer believe no-first-use has value for Russia today amid strained relations between Washington and the Kremlin. [It should also be noted that the U.S. government has never espoused a no-first-use doctrine.]

But it’s not only Russian officials who are liable for the current deep freeze in relations with the U.S., Perry said. American policy since the end of the Cold War has not always produced trust, he suggested, starting with what he called “premature expansion” by NATO in the period after the demise of the Soviet Union. East Germany joined NATO in 1990 after Germany was reunified, and three former Warsaw Pact nations, Hungary, the Czech Republic, and Poland, were invited to join NATO in 1997. They did so in 1999. Since 2004, nine other Eastern European countries have joined NATO.

“Part of the problem we’ve brought on ourselves,” Perry said.

Furthermore, Perry was critical of the withdrawal of the U.S. from the Anti-Ballistic Missile (ABM) Treaty in 2002, which forced that treaty to be terminated. Because it wished to pursue a National Missile Defense program, the George W. Bush Administration declared it would no longer participate in the treaty, which had banned signatories from building systems to intercept and destroy nuclear weapons delivered to targets via ballistic missiles. Russian leaders say they fear and oppose U.S. ABM programs and plans.

Many in the Russian government now believe that American leaders are seeking to foment counter-revolution against Russian interests around the world, as well as supporting factions in Russia that oppose Putin, Perry said. These fears, together with a dismal Russian economy that seems to have little chance for recovery in the near future, have engendered “ultra-nationalism” in Putin’s actions and speech that conceivably could lead to war between the U.S. and Russia — and even a nuclear exchange in a worst-case scenario, he said.

“The danger is that he [Putin] may overplay his hand and blunder into a war, and a war nobody wants,” he said.

The United States and Russia must try to reopen “serious dialogue” to find peaceful diplomatic solutions and address nuclear issues, Perry said. At the very least, American and Russian scientists need to have unofficial discussions about how to reduce existential threats to the world’s future — a practice that was much more common in past decades, he said.

The alternative will be a new nuclear arms race, which Perry said the U.S. and Russia stand at the brink of already, and also a risk that the two powers may once again turn to nuclear tests.

“We have to stop drifting to a nuclear arms race and testing,” he said.

Even more probable and alarming than a major war between nuclear-armed nations, Perry said, is the prospect of a terrorist organization such as ISIS obtaining nuclear materials. He said that these materials conceivably are “within reach” of these organizations, considering the amount of unprotected fissile material in the world. A so-called “crude” bomb constructed by terrorists, though unsophisticated by modern standards, would probably still have the destructive power of the bomb that obliterated Hiroshima, he said.

Perry showed a brief video that depicted what might occur if such a weapon were to be detonated by terrorists on the ground in Washington, D.C. The new video will eventually be used to show high school and college students, in a very dramatic way, the stark reality of the effects of a nuclear explosion on government functioning and everyday life. It was commissioned by the William J. Perry Project, an educational initiative he founded in 2012 in connection with the Washington-based Nuclear Threat Initiative.

In the movie, which Perry narrated live from the lectern, a “rogue group” of citizens from an unnamed nuclear nation manages to  improvise a single, compact uranium bomb and transport it in a crate by airplane — under the guise of agricultural equipment — to a Dallas airport. The box is then shipped to a warehouse in Washington, D.C. and driven in a van by a terrorist down Pennsylvania Avenue. Midway between the U.S. Capitol and the White House, the bomb is exploded.

The dead include the president, vice president, speaker of the house, secretary of defense, chairman of the joint chiefs of staff and 320 members of Congress. The president pro tempore of the Senate is later sworn in as the new commander in chief in a hospital.

In the scenario, terrorists declare in a radio message that they will set off five more nuclear bombs — one every week — in unspecified cities, until various political demands are met. Panic seizes the nation and people try to evacuate cities.

Meanwhile, Wall Street trading is halted. The U.S. economy plunges. Widespread rioting occurs in urban areas. Martial law is declared there, and National Guardsmen move in and start shooting looters. The video depicts civil liberties effectively being ended, as the military sets up “concentration camps” to hold those who are feared to be dangerous.

“This is my nuclear nightmare, essentially,” Perry said after presenting the video, which had evoked tears from some audience members while it was being played.

The Clock Symposium is held annually by the Bulletin to discuss grave threats to the survival of the planet, and in recent years speakers have focused both on nuclear weapons and global warming. The metaphorical clock is used by the organization as a symbol to be adjusted every year to depict the relative danger to humanity, with midnight representing doomsday.

The next position of the clock hands is expected to be announced in January.

Perry told symposium attendees that he felt a U.S.-Russian nuclear war that would cause the end of civilization is now “very unlikely still, though possible.” But he said that if the Doomsday Clock were adjusted based solely on the basis of the danger of nuclear terrorism, he would set it to 1 to 2 minutes to midnight.

Also at the Bulletin’s symposium, Gareth Evans, former foreign minister of Australia and co-chair of the 2010 International Commission on Nuclear Non-Proliferation, warned that the world’s biggest peril is that any nation with nuclear weapons might see one or more of them launched due to error or accident, causing a regional nuclear war. “It really is only a matter of time before weapons are used,” he said.

That such a calamity has not happened already, he said, is “a matter of sheer, dumb luck.”

Evans, who is now chancellor of the Australian National University, said abolition of nuclear weapons wherever they exist must remain the long-term goal of world leaders, even if the goal appears very elusive now.

“The main game in all of this…is not peaceful uses, or nuclear security, or nonproliferation, but outright nuclear disarmament–the complete elimination from the face of the Earth of the most indiscriminately inhumane weapons ever invented,” he said. “The basic argument first articulated by the Canberra Commission in 1996 remains compelling: So long as any country has nuclear weapons, others will want them; so long as any country has nuclear weapons, they are bound one day to be used, by accident if not by design; and any such use will be catastrophic for life on this planet as we know it.”

The key role of experts such as nuclear scientists in today’s world is to refute arguments about nuclear deterrence that are once again being used to justify proliferation and modernization, even though such deterrence theories make little practical sense anymore, Evans said.

“It is not just a moral argument–as important as the reborn humanitarian movement now is–that has to be mounted against nuclear weapons,” he said. “Nor a financial argument, though the extraordinary opportunity cost of nuclear programs–in terms of other desirable expenditure foregone–might appeal to some hardheads. What policy makers need to be persuaded about are the rational, strategic arguments against nuclear weapons: that in fact they are at best of minimal, and at worst of zero, utility in maintaining stable peace.”