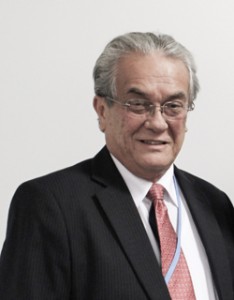 Santa Barbara – Marshall Islands Foreign Minister, Tony de Brum, and the people of the Marshall Islands, have been honored with the 2015 Right Livelihood award “in recognition of their vision and courage to take legal action against the nuclear powers for failing to honor their disarmament obligations under the Nuclear Non-Proliferation Treaty.”

The award, from Swedish charity, the Right Livelihood Award Foundation, was established in 1980 to honor and support those “offering practical and exemplary answers to the most urgent challenges facing us today.” Widely known as the “Alternative Nobel Prize,” the Right Livelihood Award has no categories, but rather, recognizes that in striving to meet the human challenges of today’s world, the most inspiring and remarkable work often defies classification.

Minister de Brum has spent his entire life working for peace, justice and a world free of nuclear weapons on behalf of the Marshall Islands. He is also a powerful advocate on the issue of climate change. Said Minister de Brum, “Clearly, one cannot isolate climate change from the other most pressing issue of world security today. As a country that has seen the ravages of war, suffers the lingering effects of nuclear tests, and faces the onset of a rising sea, we see all these to be threats of equal force against world peace and human life.”

In a courageous move last year, the Marshall Islands, led by Minister de Brum, filed lawsuits against all nine nuclear-armed nations in the International Court of Justice and separately against the United States in U.S. Federal District Court. The lawsuits call upon these nations to fulfill their legal obligations, under the Nuclear Non-Proliferation Treaty and customary international law, to begin and conclude negotiations for complete nuclear disarmament.

In 2012, the Nuclear Age Peace Foundation awarded Minister de Brum its Distinguished Peace Leadership Award. More recently, and the Foundation has served as a consultant to the Marshall Islands and de Brum on their Nuclear Zero lawsuits. David Krieger, President of the Foundation commented, “Tony de Brum is one of the truly outstanding political leaders of our time. He is relentless in his pursuit of peace and justice. He and the people of the Marshall Islands have played an oversized role in the fight to end the nuclear weapons era – by going to court to hold the nuclear-armed countries to their nuclear disarmament obligations under international law.  They have also played a major role in the fight to halt climate change. Minister de Brum and the people of the Marshall Islands are most worthy of the Right Livelihood Award and of the recognition being bestowed upon them.”

You can download a photo of Foreign Minister Tony de Brum for use with this story at this link: http://bit.ly/tdebrum. To set up interviews, please contact Rick Wayman, NAPF Director of Programs, at rwayman@napf.org or (805) 696-5159.

Founded in 1982, The Nuclear Age Peace Foundation’s mission is to educate and advocate for peace and a world free of nuclear weapons and to empower peace leaders. The Foundation is comprised of individuals and organizations worldwide who realize the imperative for peace in the Nuclear Age. It is a non-partisan, non-profit organization with consultative status to the United Nations. For more information, visit www.wagingpeace.org.