This article was originally published by Common Dreams, and is re-posted under a Creative Commons Attribution-Share Alike 3.0 License.

“. . . and they shall beat their swords into plowshares, and their spears into pruning hooks; nation shall not lift up sword against nation, neither shall they learn war anymore.”

These lost words — Isaiah 2:4 — are nearly 3,000 years old. Did they ever have political traction? To believe them today, and act on them, is to wind up facing 25 years in prison. This is how far we haven’t come over the course of what is called “civilization.”

Meet the Kings Bay Plowshares 7: Liz McAlister, Steve Kelly, Martha Hennessy, Patrick O’Neill, Clare Grady, Carmen Trotta and Mark Colville. These seven men and women, Catholic peace activists ranging in age from their mid-50s to late 70s, cut open the future, you might say, with a pair of bolt cutters a year and a half ago—actually they cut open a wire fence—and, oh my God, entered the Kings Bay Naval Base, in St. Mary’s, Ga., without permission.

The Kings Bay Naval base, Atlantic home port of the country’s Trident nuclear missile-carrying submarines, is the largest nuclear submarine base in the world. 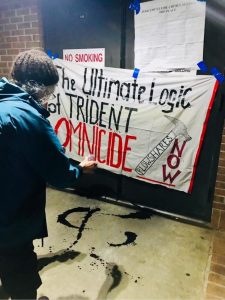 The seven committed their act of symbolic disarmament on April 4, 2018, the fiftieth anniversary of the assassination of Martin Luther King. Here’s what they did, according to the Plowshares 7 website: “Carrying hammers and baby bottles of their own blood,” they went to three sites on the base—the administration building, a monument to the D5 Trident nuclear missile and the nuclear weapons storage bunkers—cordoned off the bunkers with crime scene tape, poured their blood on the ground and hung banners, one of which contained an MLK quote: “The ultimate logic of racism is genocide.” Another banner read: “The ultimate logic of Trident is omnicide.”

They also spray-painted some slogans (such as “May love disarm us all”), left behind a copy of Daniel Ellsberg’s book, The Doomsday Machine: Confessions of a Nuclear War Planner, and, oh yeah, issued an indictment of the U.S. military for violating the 1968 U.N. Nuclear Non-Proliferation Treaty, signed by 190 countries (including the United States).

Article VI of the treaty reads: “Each of the Parties to the Treaty undertakes to pursue negotiations in good faith on effective measures relating to cessation of the nuclear arms race at an early date and to nuclear disarmament, and on a treaty on general and complete disarmament under strict and effective international control.”

Then they waited to be arrested.

The plowshares movement has been taking actions like this since 1980. The Kings Bay action was approximately the hundredth.

Three of the seven have been in prison ever since, and the other four, who were able to make bail, have had to wear ankle bracelets, limiting and monitoring their movement. In early August—indeed, between the anniversaries of the nuclear destruction of Hiroshima and Nagasaki—the seven testified at a U.S. District Court hearing in Brunswick, Ga. The charges were not dismissed and their trial date is set for Oct. 21.

What will happen, of course, is anyone’s guess. One of the defendants, Martha Hennessy (granddaughter of Catholic Worker co-founder Dorothy Day), put the question this way: “Will we be allowed to speak?”

That is to say, will the judge give the defendants and their legal team a chance to open the case to the size of humanity’s future—the omnicidal danger represented by the nuclear weapons in U.S. possession — or will she insist on limiting the case to the matter of trespassing and damaging (or belittling) government property?

“We took these actions to say the violence stops here, the perpetual war stops here—at Kings Bay, and all the despair it represents,” said defendant Clare Grady. “We took these actions grounded in faith and the belief that Jesus meant what He said when He said, ‘Love your enemies,’ and in so doing offers us our only option for hope.”

In other words, will this trial truly be equal to the “crime” that it’s about? The crime is the possibility of nuclear annihilation, the death of hundreds of millions of people — and the fact that there is no way to hold a nation accountable . . . at least not this nation . . . for its arrogant possession and ongoing development of weapons of mass destruction.

Just for a moment, try to imagine national policy based on “love your enemies.”

The mind stops, crying out: Are you kidding me? What could possibly seem more absurd? What could possibly ignite more cynicism? Hitler, Munich, blah blah blah. National policy, especially for the world’s dominant superpower, is based on the threat of unrelenting force. O Kings Bay Plowshares 7, what were you thinking? Globally speaking, nothing but force is possible, or imaginable without a dismissive snort.

But then a pause sets in: “and they shall beat their swords into plowshares.”

This concept, bigger than any specific religion, has failed (so far) to alter history. Preparing for and waging war has dominated human collective action throughout recorded history, and for nearly three-quarters of a century now, the human race (or a fragment of it), has been in possession of weapons of mass destruction, and some of the guardians continually plan to use them.

Here, for instance, is a single sentence from the Nuclear Operations Handbook, which was mistakenly uploaded by the Pentagon last June, then quickly removed from public access, but not  before the Federation of American Scientists got ahold of it and reposted it: “Nuclear forces must be prepared to achieve the strategic objectives defined by the President.”

Strategic objectives? Our current president, the guy with access to the button, recently suggested nuking hurricanes, a preposterous idea that would essentially use their winds to spread radiation. “Usable nukes” are being developed, and the United States is a country married to endless war, not to mention gerrymandering, voter suppression and a commitment to making certain that peace remains politically marginalized and beyond the reach of public opinion — thus guaranteeing that there is no way to bring political accountability to our insane nuclear stockpile.

Enter the Kings Bay Plowshares 7, trespassing in defiance of this crime against the future. Ordinary citizens have begun to hold the nation, and its military, accountable.

For more information about the Kings Bay Plowshares 7, click here.