Day Five at the ICJ: Everybody’s Doing It

The Marshall Islands wrapped up the first week of hearings in its nuclear disarmament cases with oral arguments against the United Kingdom. The RMI arguments outlined why the International Court of Justice (ICJ) should declare jurisdiction in this case, and rebutted arguments presented by the UK on Wednesday to the Court.

Phon van den Biesen, Co-Agent of the Marshall Islands, told the Court that much of the UK’s argument presented earlier in the week was self-proclaimed. Mr. van den Biesen said, “The respondent states, quoting the most authoritative source available to it, that is quoting itself, that ‘[t]he United Kingdom has a strong record on nuclear disarmament.’” Van den Biesen went on to outline how the UK is not only not engaged in nuclear disarmament negotiations, but “on the contrary it is and continues to be opposed to such negotiations.” 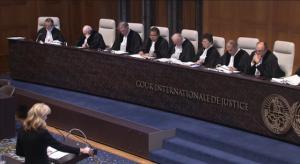 Laurie Ashton, Counsel to the Marshall Islands, argues at the International Court of Justice on 11 March 2016.

Laurie Ashton, also arguing on behalf of the Marshall Islands, countered the UK’s assertion that the RMI only joined the ICJ in order to bring this case. The Marshall Islands, Ashton argued, has now had its compulsory jurisdiction declaration on file with the Court for nearly three years and has not modified it in any way. Ms. Ashton stated, “The UK’s apparent indignation at the Marshall Islands’ acceptance of the UK’s standing invitation to resolve disputes involving international law and the interpretation of treaties is misplaced.”

Tony de Brum opened the hearing by describing the seriousness with which the Marshall Islands treats the issues raised in the case. He repeated the testimony of Lijon Eknilang, presented to the ICJ in 1995 during its Advisory Opinion case. Ms. Eknilang said, “Women on the island have given birth to babies that look like blobs of jelly. Some of these things we carry for eight months, nine months. There are no legs, no arms, no head, no nothing. Other children are born who will never recognize this world or their own parents. They just lie there with crooked arms and legs and never speak.”

Mr. de Brum also addressed the “one hand clapping” argument presented by the UK’s Sir Daniel Bethlehem on Wednesday. Bethlehem argued that if the Court would order the UK to negotiate for nuclear disarmament, it would be the “one hand clapping” among the nine nuclear-armed states. De Brum said, “This is another way of saying that, to the UK, no parties are pursuing in good faith such negotiations. Or, put differently still, it is like the person who, caught in poor conduct, replies: ‘Everybody’s doing it.’”

He continued, “The ‘everybody’s doing it’ defense never worked in my own household, does not work for my Country, and should not hold water before this Court. Moreover, the UK entirely ignores the vast majority of non-nuclear-weapon States, such as the Marshall Islands, that are now seeking such negotiations in earnest.”

On Monday, the UK will present its final oral arguments relating to its preliminary objections, followed by the Marshall Islands’ final oral arguments on Wednesday. Following the conclusion of this phase of oral arguments, the judges will conduct private deliberations until announcing a decision on jurisdiction and admissibility at a date to be announced.

Also on Monday, the Marshall Islands will present its final arguments in the case against India.

Rick Wayman is Director of Programs at the Nuclear Age Peace Foundation, a consultant to the Republic of the Marshall Islands. He is tweeting about the ICJ hearings at @rickwayman.