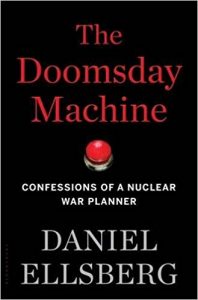 The man who so famously cast light onto the truths of the Vietnam War has now revealed a much larger threat to not only the United States but to all the citizens of our world. Mr. Ellsberg’s new work has the initial effect of scaring the rational reader out of their wits. His personal encounters with the nuclear age have yielded a multitude of warnings for those still holding the illusion that deterrence can save us. He skillfully elevates the faults of our nuclear programs, using his narrative of careful research and silenced horror to show the qualifications he has for raising these concerns. From the interviews he conducted as an employee of the RAND corporation to the war plans he read in the Department of Defense, Daniel Ellsberg’s book is filled with the factors that complete his titular Doomsday Machine. He describes a broken system of retaliation, a history of unnecessary risks, and a government whose morals were lost to the concept of a “just war.”

In the era of barbed insults regarded as precursors to nuclear threat, the warnings yielded by The Doomsday Machine have become required reading. Many of the circumstances of Ellsberg’s early fears (delegation of first-use capabilities, casualty counts that fail to recognize the theory of nuclear winter, and the space left within deployment of the arsenal for human error) haven’t been fixed or addressed since his time at the Pentagon. We live under the threat of a force the danger of which we cannot comprehend. What Doomsday Machine attempts to do is comprehend this danger, so as to start to dismantle it.

Tracing the nuclear bomb to its early days on a blackboard at UC Berkeley, he speaks to the uncertainty even its creators had as to what the detonation of this weapon would cause. He speaks to the family men and young physicists who, on the eve of the Trinity tests, took bets as to whether or not their first test would be the end of life on Earth. The atomic flash at the outset of this earliest ever detonation was momentarily mistaken for atmospheric ignition, a seconds-long death of all life, where “the earth would blaze for less than a second in the heavens and then forever continue its rounds as a barren rock.” Even Hitler’s administration did not think the risk worth it, choosing not to pursue scientific research on the creation of such a weapon. Yet now the United States, upheld as the world police for all things moral and ethical, has stockpiled thousands of thermonuclear warheads, while the use of a mere three hundred of their number could cause just as devastating a finale to humanity’s time on Earth.

Ellsberg asks, “Does the United States still need a Doomsday Machine? Does Russia? Did they ever?”

He tells us, “The mortal predicament did not begin with Donald J. Trump, and it will not end with his departure.”

Daniel Ellsberg’s title evokes Kubrick’s film on purpose, a metaphor that culminates in his definition of the “Strangelove Paradox.” The United States has thousands of “Doomdsay Machine” weapons and hundreds of “fingers on the button.” The question the reader must ask, now mortified by the necessary horrors of Ellsberg’s masterpiece, is how to save the world.

You can find Ellsberg’s book at your local bookshop, or click here to purchase on amazon.com.