This article was originally published in Reaching Critical Will’s News In Review, which is distributed to delegates and civil society representatives at the Non-Proliferation Treaty Preparatory Committee in Geneva. 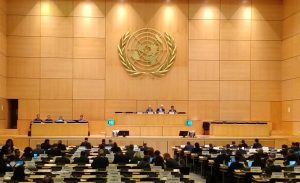 In February, the Democratic People’s Republic of Korea (DPRK) was widely and, I would say, unfairly criticized by the U.S. media, politicians, and even diplomats for its participation in the PyeongChang 2018 Olympic Winter Games. By sending high-level, suave officials to the Olympics, the narrative went, the DPRK was engaged in a “charm offensive” to win over the world and make us forget about its serious human rights violations.

This week at the NPT PrepCom, the United States launched a charm offensive of its own, holding a well-attended side event during Wednesday’s lunchtime session. Friendly faces from the Department of State and Department of Defense told attendees that there is nothing to worry about in the Trump administration’s Nuclear Posture Review (NPR); there is continuity with past U.S. nuclear policy, and their actions to modernize their nuclear arsenal and build new types of nuclear weapons are being done benevolently for the security of the world.

The substance of the side event did not differ much from the content of the written Nuclear Posture Review, but it was presented with a smile and an assurance that everything would be ok – definitely not the prevailing mood of the written document.

Hans Kristensen of the Federation of American Scientists criticized the U.S. nuclear weapons complex as a “self-licking ice cream cone.” Many of the modernization programs and proposed new nuclear weapons systems are being undertaken in order to simply maintain nuclear weapons production capacity and know-how at extraordinary financial cost. The real costs, however, lie in the additional decades of nuclear weapons deployment and the human and environmental toll that is inevitable if the weapons are ever used.

Jackie Cabasso of Western States Legal Foundation predicted the following day’s U.S. charm offensive when she called the Nuclear Posture Review a sales pitch. Ms. Cabasso also believes the NPR was issued as a threat. The threats to use nuclear weapons are explicit throughout the document, but even the issuing of the Executive Summary in Russian, Chinese, and Korean can be viewed as a not-so-veiled threat to nations that the United States currently views as adversaries.

At the end of Wednesday’s side event, Christopher Ford, U.S. Assistant Secretary of State for International Security and Nonproliferation, said, “This is how responsible nuclear weapon states should behave.” Self-congratulation and charm offensives will not hide the only purpose of nuclear weapons: to indiscriminately slaughter millions of human beings.