Archduke Franz Ferdinand
with no troops at his command
was brought down by an assassin’s hand.
That’s how the war began.

No one thought it would last long,
but they were all sadly wrong,
as with alliances and patriotic song
they moved the war along. 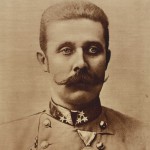 From the very start
the men in trenches did their part
until shot through the head or heart
to be taken away on a medic’s cart.

As history has taught before
the fighting gave us only blood and gore.
If not to stop the next great war,
what are lessons for?

One wonders if in time we’ll learn
to put away our weapons, to discern
the true value of a human life, to turn
from war to peace before we burn.

This poem was originally published by Truthout.