70 Years After Hiroshima, It’s Time to Confront the Past

This article was originally published by the Huffington Post. 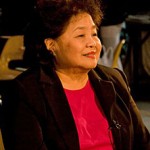 As the 70th anniversary of Hiroshima and Nagasaki approaches, several people have been asking me to share my thoughts about those days in 1945, when our world changed forever. The first thing that comes to mind is an image of my four-year-old nephew Eiji — transformed into a charred, blackened and swollen child who kept asking in a faint voice for water until he died in agony. Had he not been a victim of the atomic bomb, he would be 74 years old this year. This idea shocks me. Regardless of the passage of time, he remains in my memory as a 4-year-old child who came to represent all the innocent children of the world. And it is this death of innocents that has been the driving force for me to continue my struggle against the ultimate evil of nuclear weapons. Eiji’s image is burnt into my retina.

In June I had the opportunity to visit Berlin and Potsdam to meet German citizens to talk about my experience in Hiroshima. Germans and Japanese experienced a similar historical trauma as aggressor-states in World War II. But there has been a decisively different way that the Japanese and German governments are dealing with their wartime responsibilities.

Many Japanese people were deeply inspired by the manner in which the German government confronted the past and dealt with wartime atrocities with integrity. Former President Richard von Weizeker’s inspiring speech on the occasion of the 40th anniversary of Germany’s surrender touched the conscience of the world, and earned our profound respect when he said “We Germans must look truth straight in the eye — without embellishment and without distortion… There can be no reconciliation without remembrance.”

The Japanese government should emulate this profound sentiment in confronting the past and dealing with our as yet unresolved relationships with neighboring countries, particularly Korea and China. Tragically, the current Abe administration is seeking to expand Japan’s military role in the region and forsake our much-cherished Peace Constitution.

And in the United States, a repugnant remembrance is soon to be unveiled. The National Park Service and the Department of Energy will establish the Manhattan Project National Historical Park. Unlike the memorials at Auschwitz and Treblinka, the United States seeks to preserve the history of the once top-secret sites at Los Alamos, Oak Ridge, and Hanford, where international scientists developed the world’s first nuclear bomb, as a sort of celebration of that technological ‘achievement’. Among the first so-called ‘successes’ of this endeavor was creating hell on earth in my beloved Hiroshima.

As a 13-year-old schoolgirl, I witnessed my city of Hiroshima blinded by the flash, flattened by the hurricane-like blast, burned in the heat of 4000 degrees Celsius and contaminated by the radiation of one atomic bomb.

Miraculously, I was rescued from the rubble of a collapsed building, about 1.8 kilometers from Ground Zero. Most of my classmates in the same room were burned alive. I can still hear their voices calling their mothers and God for help. As I escaped with two other surviving girls, we saw a procession of ghostly figures slowly shuffling from the centre of the city. Grotesquely wounded people, whose clothes were tattered, or who were made naked by the blast. They were bleeding, burnt, blackened and swollen. Parts of their bodies were missing, flesh and skin hanging from their bones, some with their eyeballs hanging in their hands, and some with their stomachs burst open, with their intestines hanging out.

Within that single flash of light, my beloved Hiroshima became a place of desolation, with heaps of skeletons and blackened corpses everywhere. Of a population of 360,000 — largely non-combatant women, children and elderly — most became victims of the indiscriminate massacre of the atomic bombing. As of now, over 250,000 victims have perished in Hiroshima from the effects of the blast, heat and radiation. 70 years later, people are still dying from the delayed effects of one atomic bomb, considered crude by today’s standard for mass destruction.

Most experts agree that nuclear weapons are more dangerous now than at any point in our history due to a wide variety of risks including: geopolitical saber rattling, human error, computer failure, complex systems failure, increasing radioactive contamination in the environment and its toll on public and environmental health, as well as the global famine and climate chaos that would ensue should a limited use of nuclear weapons occur by accident or design. Yet few people truly grasp the meaning of living in the nuclear age.

This is why I have been overjoyed at witnessing the recent development of a global movement involving Non Nuclear Weapon States and NGOs working together to achieve the elimination of nuclear weapons. This movement has been reframing the problem of nuclear weapons from deterrence credibility and techno-military issues to the issue of humanitarian consequences. The result is a strong push for a nuclear Ban Treaty to begin a process for nuclear disarmament. Norway, Mexico and Austria have collaborated with the International Campaign to Abolish Nuclear Weapons and the International Committee of the Red Cross to organize three successful International Conferences on the Humanitarian Impact of Nuclear Weapons.

At the end of the most recent conference in Vienna last December, the Austrian government unveiled the “Austrian Pledge” to fill the legal gap for the prohibition and elimination of nuclear weapons. Now referred to as the Humanitarian Pledge, it is supported by 113 nations that are calling on Nuclear Weapon States and those who stand with them, to begin a process for nuclear disarmament.

To repeat the words of Richard von Weizeker: “We must look truth straight in the eye – without embellishment and without distortion.” The truth is, we all live with the daily threat of nuclear weapons. In every silo, on every submarine, in the bomb bays of airplanes, every second of every day, nuclear weapons, thousands on high alert, are poised for deployment threatening everyone we love and everything we hold dear.

How much longer can we allow the nuclear weapon states to wield this threat to all life on earth? The time has come for action to establish a legally binding framework to ban nuclear weapons as a first step in their total abolition. I passionately urge everyone who loves this world to join the growing global movement. And let us make the 70th anniversary of the atomic bombing of Hiroshima and Nagasaki the appropriate milestone to achieve our goal: to abolish nuclear weapons, and safeguard the future of our one shared planet earth.