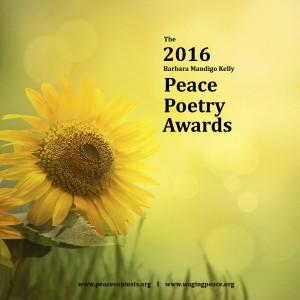 The following poems were selected as the winners of the Nuclear Age Peace Foundation’s 2016 Barbara Mandigo Kelly Peace Poetry contest. For more information about this annual contest, visit www.peacecontests.org. Click here to read the winning poems from all years of the contest.

I.
Inside my niece Bianca’s old room I found two ziplocks stuffed. With rolls and rolls of hair.
Dead as a
doornail black as a tunnel hair thin. As strands of tumbling seaweed. Maybe it was my sister.
Who
stashed away Bianca’s locks so no one would see trying to save that rootless hair. That hair
without a
home.    It all
fell out.

II.
The marrow should have worked. They said she had six months to live.

III.
That’s what doctors told the fishermen over 50 years ago while they were out at sea. Just miles
away from
Bikini. The day the sun exploded.

IV.
There is an old Chamorro legend that Guahan was once attacked. By a giant monster fish. The
women,
guided by their dreams, hacked off their hair. Wove their locks into a massive magical net. They
caught
the fish. They saved their islands.

What a Time to Be Alive
by Jocelyn Chambers
Adult Category, Honorable Mention

death taught me how to dress.
it says “not that one, these shoes instead, a little less vibrant and a little more docile, more
humility, less confidence.”
death taught me not to wear hoodies, to keep my head uncovered, to wear light colors
instead of dark because i am dark enough already
to buy a belt for every pair of pants i own, better yet, to not wear pants,
death taught me how to do my hair, it says “less coil, more common, straighter, longer,
thinner,” it burns my scalp and hands me a comb and says “isn’t it nice to run your
fingers through it now,”
death taught me who to like, what music to listen to, how to keep people comfortable,
how to walk; “don’t limp, straight shoulders, but stay smaller than them,”
it taught me my vocabulary, all of the big words that earn me awards such as ‘articulate,’
‘not like the rest of them,’ ‘a good one,’
death is always telling me to be less, less african, more american, a welcome addition, a
token, to lay myself bare and strip myself of any weapons, any threats
death is an x-ray machine, and says if i do anything wrong, it will come
as if i’m not dying to myself already
death says “what a time to be alive.”
because in this country, white is invisible.

An incident at the bridge of no return
by John B. Lee
Adult Category, Honorable Mention

in an assignment
involving a clear view
the young lieutenant
was trimming a particular poplar tree
so the Americans
might observe without obstruction
the deployment and movement
of enemy guns, and
training his axe
on the aspen with its shivering leaf
looking north to the bridge of no return
he fell from a fatal blow to the brain from behind
the cold tool blunting his last thought
like the dark wedge
where the burnt Y of the barkless trunk
remains with its blackened knot
like a blind eye fastened at the fork
of two branches
it stands there
a scorched post crowned in rot
with us living on
in such a ridiculous world
in the sad significance of risible things
where what matters most
seems valued least
and what matters least
is conserved
in the chiseled knowing of stone

“Even if you die in the water, it’s better to be killed by snakes or crocodiles than
by soldiers”
–  Nyakier Gatluak, South Sudan (from NYT)

On our way home, we roll over a hill & a deer
leaps in front of the car
loses its balance
gracefully, not unlike a man
heaves into a woman.

The corpse lists on the asphalt like
a body in a dark current, her belly still pulsing with
something warm & vaguely fawn-like.
A life within
a life.

I know children who leap into
crocodile-infested waters to keep
from knowing men. I know a boy
who was born against a field of red

petals,
himself opened up. Who could name
every curve of the gun, slept with it
under his neck, a clay reminder dissolving

the way a scream dissolves
into a current.

Tell me how to bring a child into a world where
the river claims the boy who would rather face
the teeth of a beast than face his older self.

The water swells over him
as a mother’s round stomach swells with a seed.

So many poppies
in the field, seeping against the blank
bits of sky,
poppies that are as dark
as mouths.

An Open Letter to the Bullet That Shot My Brother
by Matthan Sutton
Youth Category (13-18), First Place Tie

You are not to blame, and it took me time to see but the way that you
Scream through the air is similar to the way that he
Screamed as the man in green pulled the trigger:
Involuntarily.

And your life must not have been easy either, a raindrop of molten
Metal pounded to proliferate Man’s purpose in the world through
Tightly packed and popped pistols in dark alleys and
War valleys and demonstration rallies in countries where people are silenced
Through violence and, to be the toy Men use when they
Don’t get their money or their oil or their way in the world they built themselves. It
Must be hard to fly for them. To stream through the sky only to
Fall with the body you killed for them.

Me and You
by Kiran Treacy-Hind
Youth Category (12 and Under), First Place

The world talks to me in my head and birds chirping in the wind and the sun shining on my face.
Dogs looking for their bones, while I see beauty in every face.
The world brings us together,
it moves as slow as a sloth.
People live in different ways, treat them the same way.
The world has so many mysteries
that no one knows and may not find.
We all have two shadows inside us, but it helps us, it finds who we are, in this place where
people live and die, and will never find why they were born.
The world brings us together, like a mother and her child.
It moves us, helps us, and cares for us. So why are we killing the earth, if we help it,
it will grow so we can grow.
We may feel helpful to poor children,
We may be helpful to people that
have been bullied and all sadness all
hate will wash away, as the sun shines
on the water, as the birds fly in the
wind and never stop seeing beauty.

I Remember
by Inica Kotasthane
Youth Category (12 and Under), Honorable Mention

I remember those days,
When I was a young, innocent child.
I never had understood what was going on,
For those long, dark six years.

It first started with the radio,
My parents chatting nervously,
While rushed reports were heard on
That old ‘speaking box.’

Then, the noises came.
They would awake me in the middle of the night.
The whooshing of airplanes flying overhead,
And mother closing those dark curtains.

Those days father refused for mother and I
To go outside onto the streets.
I used to be so happy because I wouldn’t go to school,
But little did I know about the real reason.

When dinner was scarce,
And I ate every last crumb of bread.
When I looked out the window to see
Poor humans being beat to death.

I remember those days not as clearly,
As I did back then.
And even after all these years,
I still wonder why a person would do that to another.

Why do we do this to one another,
Are we animals: predators and prey?
We must find a way to get together,
And see where peace has gone.