Youth Program on the Humanitarian Dimensions of Nuclear Disarmament

In early September 2012, with the generous support of the Swiss Federal Department of Foreign Affairs, students from Austria, Brazil, Germany, Mexico, Switzerland, Iran, Italy, Palestine, and Romania participated in the Nuclear Age Peace Foundation’s Youth Program on the Humanitarian Dimensions of Nuclear Disarmament. These students met with members of civil society and representatives from different states. They further participated in a seminar on the humanitarian dimensions of nuclear disarmament and an informational workshop about the Ban All Nukes Generation’s tentative program, entitled “Claim your voice. Ban the Bomb,” a youth empowerment program that will be held during the conference in Oslo. 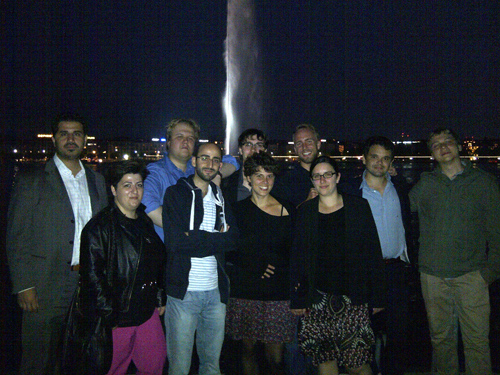 When the students arrived to Geneva on September 4, 2012, they participated in a roundtable discussion with members of the NGO Committee for Disarmament, a substantive committee of the Conference of NGOs with Consultative relationship with the United Nations Committee, that is composed of Reaching Critical Will, International Peace Bureau, Mayors for Peace, World Council of Churches, Soka Gakkai International (SGI), Nuclear Age Peace Foundation, and the International Campaign to Abolish Nuclear Weapons. During this meeting, participants asked the members of the NGO Committee about the international disarmament machinery, the role of religious organizations in promoting nuclear disarmament, and the humanitarian dimensions of nuclear disarmament.

In the afternoon of September 5, the participants attended the NGO Committee for Disarmament’s Seminar on the Humanitarian Dimensions of Nuclear Disarmament in which Mr. Colin Archer, the Secretary-General of the International Peace Bureau served as the moderator. During this seminar, the participants heard statements from Mr. Peter Herby, head of the legal division of the International Committee of the Red Cross; Dr. Daniel Plesch, Director of the School of Oriental and African Studies’ Center for International Studies and Diplomacy (CISD); Mr. Magnus Lovold, a representative of the International Campaign to Abolish Nuclear Weapons (ICAN); and Mr. Christian N. Ciobanu, Geneva Representative of the Nuclear Age Peace Foundation. Finally, based on the feedback from the participants, they enjoyed Lovold and Ciobanu’s views on how the humanitarian disarmament process can help raise awareness about the need for the international community to support a nuclear weapons convention and the devastating environmental impacts of nuclear weapons.

On September 6, the final day of the program, the Ban All Nukes Generation convened an informational workshop about the “Claim your voice. Ban the Bomb.” In addition, as part of the workshop, the representatives of Ban All Nukes Generation underscored the need for young people to become empowered citizens and attend the program in Oslo in March 2013. The program would also tentatively give young European people an opportunity to make an impact at the conference in Oslo. Specifically, it will provide them with the methodological tools they need to become actively involved at the local, national and European levels to resolve both the global political and environmental impacts of nuclear weapons.