Santa Barbara, CA – A Minuteman III intercontinental ballistic missile (ICBM) test is scheduled for launch between 11:39 p.m. Wednesday and 5:39 a.m. Thursday of this week, from Vandenberg AFB to Kwajalein Atoll in the Marshall Islands. While it won’t carry an armed nuclear warhead, the purpose of the United States’ 450 land-based ICBMs is to deliver powerful nuclear warheads to any target on Earth in under an hour. 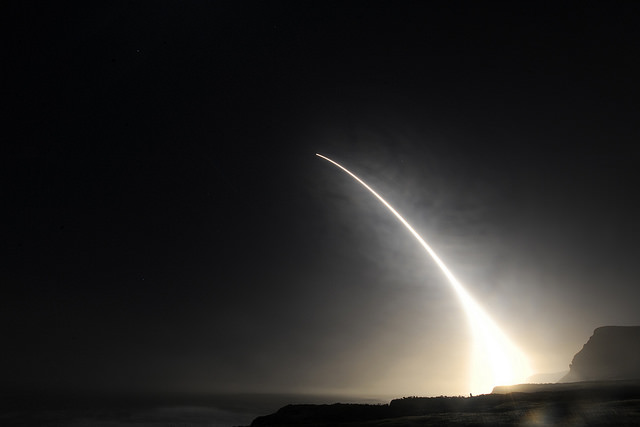 The scheduled test comes just days after the Trump administration imposed new sanctions on Iran to punish them for their latest ballistic missile test. President Trump tweeted that “Iran has been formally PUT ON NOTICE.” Michael T. Flynn, Trump’s national security advisor, said, “The ritual of convening a United Nations Security Council in an emergency meeting and issuing a strong statement is not enough. The Trump administration will no longer tolerate Iran’s provocations that threaten our interests.”

USAF officials regularly boast of U.S. intercontinental ballistic missile tests as “messages we send to our allies who seek protection from aggression and to adversaries who threaten peace.” Clearly, this kind of double standard cannot be lost on the rest of the world.

William Perry, former defense secretary under President Bill Clinton, has stated unequivocally that his experiences have led him to believe the U.S. should remove ICBMs from its nuclear triad, which also includes strategic bombers and submarine-launched ballistic missiles.

With each missile test, the U.S. sends a clear and expensive message that it continues to be reliant on nuclear weapons. Each test costs tens of millions of dollars and contributes to the U.S. plans to spend $1 trillion modernizing its nuclear arsenal over the next thirty years.