UN First Committee Side Event Brings Diplomats and Youth Together 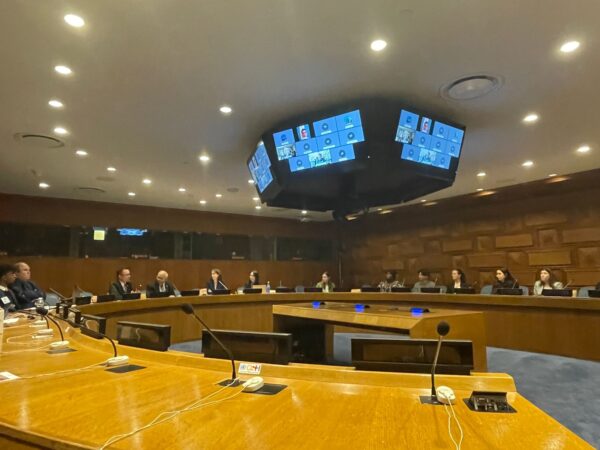 In her opening remarks, Dr. Ivana Hughes of NAPF stressed the imperative of nuclear disarmament education as a powerful tool to help achieve a just and peaceful world. Dr. Hughes emphasized that nuclear destruction did not simply end with Hiroshima and Nagasaki, but its legacy from decades of testing and development is prevalent in many parts of the globe such as the American Southwest, Marshall Islands, Kiribati, French Polynesia, and Kazakhstan. Dr. Hughes reminded the audience that we all continue to be the victims of nuclear terror with the normalization of discourse around nuclear weapons use.

H.E. Ambassador Teburoro Tito of Kiribati stressed that the damage caused by nuclear weapons testing is still present and impacting affected communities in his country. H.E. Ambassador Tito specifically addressed the youth in attendance, encouraging them to continue their disarmament education and help in the global effort to eliminate WMDs. Finally, he described the struggle for nuclear disarmament to “the greatest love story to save mankind.”

Anna Ikeda of SGI explained that disarmament education can push the needle forward. In this connection, Ikeda mentioned that the creation of the TPNW can be seen as an educational journey. Ikeda stressed that our shared humanity is the focal point of nuclear disarmament education and campaigning. With the rise of militarism and racism globally, the quality of education was also emphasized, pushing the value and need for an intersectional education encompassing diversity and self-reflection.

Mr. Christian Ciobanu of NAPF and RTT stressed the importance of youth advocacy as the vehicle of current and future change in nuclear disarmament. RTT works globally by collaborating with frontline communities on the twin existential threats of climate change and nuclear weapons. RTT encourages youth activists to raise awareness about the TPNW. Ciobanu emphasized the need for multipronged approaches to nuclear disarmament education. He discussed RTT’s widespread campaigns through curricula, filmmaking, toolkits, and mediums like poetry and art. He further highlighted RTT’s new journal that contains submissions from international youth on nuclear disarmament and environmental justice.

Jeremiah Williams of Pace University spoke of his personal journey to involvement with the existential issue of nuclear proliferation and its disarmament. He shared his reflections about the overwhelming lack of youth presence and diversity in the discussions of the issues. Williams made an appeal to the youth in audience to propagate nuclear disarmament as a crucial vehicle for change. He stressed that the inclusion of young people is essential, and that they have a right to determine their own future and influence policy of the future they will be living in.

Alicia Sanders-Zakre of ICAN presented ICAN’s new university study on Schools of Mass Destruction. As explained by Sanders-Zakre, numerous universities are involved in supporting the U.S Nuclear Weapons Complex, aiding their design, research, engineering, and normalization of nuclear weapons. Instead, she proposes that the universities and students put their efforts towards nuclear disarmament advocacy and education. Sanders-Zakre called out the U.S. refusal to sign the TPNW and said that the treaty must bring about a new order of global peace.

This event served as a pertinent reminder of the aims of disarmament education, and the vital need for it in a global system, which has normalized the existence of nuclear weapons and their proliferation.