Vandenberg Air Force Base – Amidst mounting tensions between the United States and North Korea, and just one week after a test launch of a U.S. unarmed intercontinental ballistic missile (ICBM), the U.S. has scheduled another Minuteman III ICBM missile test for Wednesday, May 3, between 12:01 a.m. and 6:01 a.m. PDT from Vandenberg Air Force Base. Like last week’s test, according to Air Force Global Strike Command, “The purpose of the ICBM test launch program is to validate and verify the effectiveness, readiness, and accuracy of the weapon system.”

David Krieger, President of the Santa Barbara-based Nuclear Age Peace Foundation (NAPF), noted, “How does one test the effectiveness of a weapons system that is designed as a deterrent, that is, to prevent others from ever using nuclear weapons against us? Such effectiveness cannot be assumed from a missile test no matter how ready we are to fire the missile or how accurate the missile proves to be. In other words, so-called ‘effectiveness’ is a psychological concept that cannot be proven by a missile test. This is a very dangerous game we are playing.”

Rick Wayman, Director of Programs at NAPF, commented, “It is significant to note that this nuclear-capable missile test will take place on the second day of the Nuclear Non-Proliferation Treaty conference. This treaty requires all parties to negotiate in good faith for an end to the nuclear arms race.”

Wayman continued, “Conducting a test-launch of a missile whose sole purpose is to deliver nuclear warheads anywhere around the world is a glaring example of bad faith and violates the spirit of the Non-Proliferation Treaty. It’s exactly this kind of double standard that undermines U.S. credibility when insisting that other nations not develop nuclear weapons and ballistic missiles.”

North Korea test-fired a ballistic missile on April 29, the day after U.S. Secretary of State Rex Tillerson convened a special session of the U.N. Security Council, calling for new economic sanctions on North Korea and other “painful” measures over its nuclear weapons program.

The Trump administration’s strategy of “maximum pressure and engagement” towards North Korea seems to rule out immediate military intervention, though U.S. officials have continued to say that “all options are on the table.”

Continued ballistic missile tests by both parties can only be perceived as provocative in nature and an escalation of an already dangerous situation. Surely our political and military leaders can and must do better. 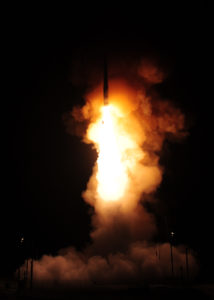 If you would like to interview David Krieger, President of the Nuclear Age Peace Foundation or Rick Wayman, Director of Programs, please call the Foundation at (805) 965-3443.