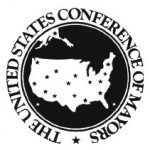 Recalling that “August 6 and 9, 2015 will mark the 70th anniversaries of the U.S. atomic bombings of Hiroshima and Nagasaki, which killed more that 210,000 people by the end of 1945,” the resolution notes that “the people of the Republic of the Marshall Islands (RMI) continue to suffer from the health and environmental impacts of 67 above-ground nuclear weapons test explosions conducted by the U.S. in their islands between 1946 and 1958, the equivalent of 1.6 Hiroshima-sized bombs detonated daily for 12 years.”

On April 24, 2014, the RMI filed “landmark” cases in the International Court of Justice against the U.S. and the eight other nuclear-armed nations, claiming that they have failed to comply with their obligations under the Nuclear Nonproliferation Treaty (NPT) and customary international law to pursue negotiations for the global elimination of nuclear weapons, and filed a companion case in U.S. Federal District Court. In its resolution, the USCM “commends the Republic of the Marshall Islands for calling to the world’s attention the failure of the nine nuclear-armed states to comply with their international obligations to pursue negotiations for the worldwide elimination of nuclear weapons, and calls on the U.S. to respond constructively and in good faith to the lawsuits brought by the RMI.”

Upon hearing news of the USCM resolution, RMI foreign minister Tony de Brum stated, “We appreciate very much the US Conference of Mayors supporting our modest efforts to rid the world of nuclear weapons.  This endorsement is acknowledged with deep gratitude on behalf of the Government and the People of the Marshall Islands, and most especially those who have lost loved ones in the mad race for nuclear superiority, and those who continue to suffer the scourge of nuclear weapons testing in our homeland.”

Over the past three years there has been a new round of nuclear disarmament initiatives by governments not possessing nuclear weapons, both within and outside the United Nations. Yet the U.S. has been notably “missing in action” at best, and dismissive or obstructive at worst. The USCM resolution documents the dismal U.S. record and calls on the administration to participate constructively in deliberations and negotiations regarding the creation of a multilateral process to achieve a nuclear weapons free world in forums including the Third Conference on the Humanitarian Impact of Nuclear Weapons to be held in Vienna, Austria in December 2014, the UN Conference on Disarmament, and the May 2015 NPT Review Conference.

The USCM also “calls on the President and Congress to reduce nuclear weapons spending to the minimum necessary to assure the safety and security of the existing weapons as they await disablement and dismantlement, and to redirect those funds to meet the urgent needs of cities.”

Recalling the U.S. commitment under the 1970 Nuclear Nonproliferation Treaty (NPT) to pursue negotiations in good faith on the elimination of nuclear weapons, the resolution notes that “forty-four years after the NPT entered into force, an estimated 16,400 nuclear weapons, most held by the U.S. and Russia, pose an intolerable threat to humanity, and there are no disarmament negotiations on the horizon” and that “the U.S. and the eight other nuclear weapon possessing states are investing an estimated $100 billion annually to maintain and modernize their nuclear arsenals while actively planning to deploy nuclear weapons for the foreseeable future.”

The resolution states that “according to the General Accounting Office, the U.S. will spend more than $700 billion over the next 30 years to maintain and modernize nuclear weapons systems,” and that “this money is desperately needed to address basic human needs such as housing, food security, education, healthcare, public safety, education and environmental protection.”

Reflecting current international tensions, the resolution warns that “the U.S.- Russian conflict over the Ukraine may lead to a new era of confrontation between nuclear-armed powers, and nuclear tensions in the Middle East, Southeast Asia and on the Korean peninsula remind us that the potential for nuclear war is ever present.” The resolution “urges President Obama to engage in intensive diplomatic efforts to reverse the deteriorating U.S. relationship with Russia.”

Expressing its “deep concern” about the U.S. failure to engage in recent intergovernmental and United Nations nuclear disarmament initiatives, the USCM “calls on the U.S. to participate constructively and in good faith in the Third Conference on the Humanitarian Impact of Nuclear Weapons to be hosted by Austria in Vienna, December 8 – 9, 2014” and “in urgent commencement of negotiations in the Conference on Disarmament for the early conclusion of a comprehensive convention on nuclear weapons,” and “to press the other nuclear weapon states to do likewise.”

The USCM “calls on the U.S. to demonstrate a good faith commitment to its disarmament obligation under Article VI of the NPT by commencing a process to negotiate the global elimination of nuclear weapons within a timebound framework, under strict and effective international control, at the May 2015 NPT Review Conference, and to press the other nuclear weapon states to do likewise.”

The USCM also “calls on its membership to Proclaim September 26 in their cities as the International Day for the Total Elimination of Nuclear Weapons and to support activities to enhance public awareness and education about the threat posed to humanity by nuclear weapons and the necessity for their total elimination.”

The resolution notes that Mayors for Peace, with over 6,000 members in 158 countries, representing one seventh of the world’s population, continues to advocate for the immediate commencement of negotiations to eliminate nuclear weapons by 2020, and that “Mayors for Peace, with members in the U.S. and Russia; India and Pakistan, and Israel, Palestine and Iran can be a real force for peace.” The USCM “expresses its continuing support for and cooperation with Mayors for Peace,” and “encourages all U.S. mayors for join Mayors for Peace.”

The resolution was sponsored by Mayor Donald Plusquellic of Akron, Ohio, past President of the USCM and a Vice-President of Mayors for Peace, and 26 co-sponsoring mayors from cities in Virginia, North Carolina, Iowa, Pennsylvania, Oregon, Florida, Massachusetts, Arkansas, Wisconsin, Illinois, Maine, California, Minnesota, and New Mexico.

Mayors for Peace is an international association, founded in 1982 by the Mayors of Hiroshima and Nagasaki. The United States Conference of Mayors is the national non-partisan association of cities with populations over 30,000.

Full text of the resolution, with the complete list of co-sponsors: http://wslfweb.org/docs/MSPUSCMsponsorsfinal.pdf

Official link (does not include list of co-sponsors): http://www.usmayors.org/resolutions/82nd_Conference/international08.asp

More information about the U.S. Conference of Mayors: www.usmayors.org