Negotiations conclude at United Nations. Treaty will open for signature in September.

New York–More than 120 countries gathered at the United Nations and today formally adopted the “Treaty on the Prohibition of Nuclear Weapons,” a treaty that categorically prohibits the possession, use, and threat of use of nuclear weapons. Non-governmental organizations played a key role in the negotiations leading up to the nuclear ban treaty.

Considered an historic step toward creating a safer and more secure world, the treaty expresses in its preamble deep concern “about the catastrophic humanitarian consequences that would result from any use of nuclear weapons.” It further recognizes “the consequent need to completely eliminate such weapons, which remains the only way to guarantee that nuclear weapons are never used again under any circumstances.”

The treaty is a clear indication that the majority of the world’s countries no longer accept nuclear weapons and do not consider them legitimate. It demonstrates that the indiscriminate mass killing of civilians is unacceptable and that it is not possible to use nuclear weapons consistent with the laws of war.

David Krieger, President of the Santa Barbara-based Nuclear Age Peace Foundation (NAPF), commented, “This is an exciting day for those of us who have worked for a world free of nuclear weapons and an important day for the world. The majority of the world’s nations have agreed upon a treaty prohibiting nuclear weapons and will open this new treaty for signatures in September. What this represents is humanity finally standing up for sanity and its own survival 72 years into the Nuclear Age.”

While the United States chose to boycott the negotiations, their repeated objections demonstrate that this treaty has the potential to significantly impact U.S. behavior regarding nuclear weapons issues. Previous weapon prohibition treaties, including the Chemical Weapons Convention and the Anti-Personnel Mine Ban Convention, have demonstrated that changing international norms leads to concrete changes in policies and behaviors, even in states not party to the treaty.

The treaty also creates obligations to support the victims of nuclear weapons use and testing and to remediate the environmental damage caused by nuclear weapons.

This effort to ban nuclear weapons has been led by the International Campaign to Abolish Nuclear Weapons, which is made up of over 400 non-governmental organizations from 100 countries. The movement has benefitted from the broad support of international humanitarian, environmental, nonproliferation, and disarmament organizations that have joined forces throughout the world. Significant political and grassroots organizing has taken place, and many thousands have signed petitions, joined protests, contacted representatives, and pressured governments.

Rick Wayman, Director of Programs at NAPF, said, “This treaty on the prohibition of nuclear weapons is truly a joint effort between the majority of the world’s countries and many dedicated non-governmental organizations, including the Nuclear Age Peace Foundation.”

Wayman presented a final statement and a working paper on behalf of the Foundation at the United Nations during the treaty negotiations. He continued, “It was an honor to participate in this historic process, which focused on the unacceptable humanitarian consequences of nuclear weapons, leading inevitably to their international prohibition. Today – because of this treaty – the world is a safer place, though there remains much work to be done.”

The treaty was adopted today by a vote of 122 to 1 with 1 abstention. It will open for signatures by states at the United Nations in New York on September 20, 2017. The treaty will enter into force 90 days after the fiftieth instrument of ratification is deposited with the United Nations. The treaty can be read in its entirety at http://www.undocs.org/en/a/conf.229/2017/L.3 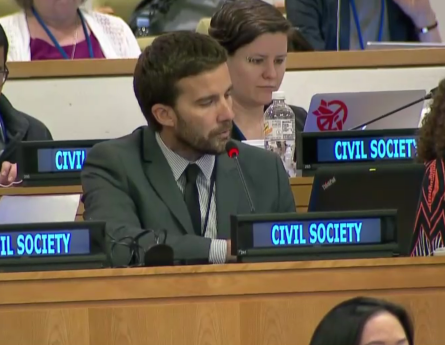 Rick Wayman delivering a statement on behalf of NAPF at the United Nations on June 16, 2017.