It has just been announced at 10 AM this morning that my colleague Whitfield Diffie and I will be receiving this year’s ACM Turing Award and the $1,000,000 that comes with it – one reason it’s sometimes called “the Nobel Prize of computing.” But what does my former life in cybersecurity, which is the reason for the award, have to do with defusing the nuclear threat – the theme of this blog? And what does either of those have to do with recapturing true love – the last part of this post’s title? This and my next few blog posts will explain, so stay tuned. 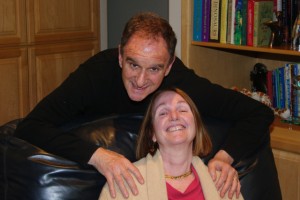 One connection between the Turing Award and reducing the risk of a nuclear disaster is that my wife Dorothie and I have decided to use my $500,000 share of the prize to further our efforts to create a more peaceful, sustainable world — which world, of course, requires eliminating the threat posed by nuclear weapons. The initial thrust of our effort will be to bring attention to a new approach we’re developing in a book due out later this year. Here’s a short summary:

“A New Map for Relationships: Creating True Love at Home & Peace on the Planet” shows how the changes needed to build a strong marriage or other intimate relationship are the same ones needed to build a more peaceful, sustainable world. It also shows why working on both issues at the same time accelerates progress on each of them.

We know this because we were able to transform an almost failed marriage into one where we haven’t had a single argument in well over 10 years. Working on global issues was essential to bringing magic back into our marriage, and personal relationships that really work are the model for a peaceful, sustainable planet.

While I’ll continue to work on reducing the risks posed by nuclear weapons, this shift in focus to include the personal dimension is a recognition of two facts.

First, few people are interested in nuclear weapons, so it’s been an uphill battle to get society to deal with this issue. But there’s a much larger “market” of people wanting to improve their relationships. In fact, Dorothie and I initially came to work on global issues out of a desire to save our marriage, not to save the world. But we came to see a strong interplay between the two goals and found that working on global issues, such as the nuclear threat, accelerated the work on improving our marriage. We’ll explain more about that in later posts.

Second, as Dorothie says in our book:

When people are confronted with the urgent need for radical change in international relations, they often ask, “What difference can I make on such a big issue?” But if the first step is for them to radically change their personal relationships for the better, who else can bring that about?

Individually, no one of us can heal the planet. But, if enough of us work hard enough to succeed in healing our personal relationships, it can be the seed for global change. It’s somewhat mysterious, maybe even mystical. But it is true.

There’s also an interesting connection between the work being recognized by the Turing Award and this new effort. Public key cryptography was a radically new way of communicating that at first seemed impossible. How could two people talking across a crowded room, with no prearrangement, exchange information privately from all the others listening in? Yet that’s what we showed how to do. And how could a digital signature be recognizable by everyone, but only created by the legitimate signer? Once people opened up to those radical, new possibilities, previously unimaginable options were opened, including modern electronic commerce, secure software updates and more.

The same is true of the interpersonal communications approach that we’ll describe in our book. Dorothie and I had to develop a new way of communicating that seemed impossible from our old vantage point. Once we found the courage to break with that old perspective and entertain the new one, our lives were immeasurably improved. And the same is true at an international level.

As just one example, I had to learn to “get curious, not furious” when Dorothie did something that seemed crazy to me. Now, every time I do that, I find out that there was something I was missing, and usually it makes my life better in ways that I also could not see until I asked Dorothie to explain.

If we, as a nation, had “gotten curious instead of furious” in 2003, we could have avoided the current disaster in Iraq. The same was true in 1964 in Vietnam, and at many other times and places. And, each of those needless wars created needless nuclear risk since every war has some small chance of escalating out of control.

If you’d like to receive updates about the book, send me an email at “martydevoe AT gmail DOT COM” with SUBSCRIBE as the subject (body text is optional).