Today there are approximately 1,800 nuclear weapons posed on high alert, ready to be launched in minutes. The radical contingency of our world due to these weapons of mass annihilation necessitates action.

On Friday, over 50 countries and over 30 international organizations concluded two weeks worth of negotiations at the Open Ended Working Group (OEWG).These meetings discussed how to create a world free of nuclear weapons. By the end of the OEWG, it was clear that a majority of countries supported a new legal instrument prohibiting nuclear weapons.

The Chair of the OEWG will produce a report on the last two weeks of negotiations, which will be released in late July or early August. The negotiations will likely continue on August 16, 17 and 19, with informal sessions held before August. 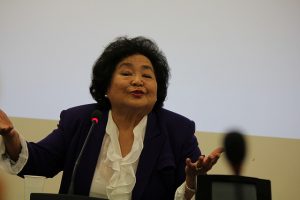 On May 4, Setsuko Thurlow, a survivor of Hiroshima, recalled how 360,000 innocent civilians became victims of one of the two worst forms of indiscriminate violence in human history. After a blinding flash of light, Setsuko remembered the “[d]ead and injured people were covering the ground. Some were made naked by the blast. They were bleeding, burned, blackened and swollen; unrecognizable as human beings.” For the NGO Wildfire, the measure of success for the OEWG is whether participants can tell Setsuko Thurlow that they did everything they could to create a world free of nuclear weapons.

Working Paper 36, signed by 126 countries, calls on the OEWG to recommend urgent pursuit of a new legal instrument in disarmament. Many of these countries are supporting negotiations for a treaty or ban prohibiting nuclear weapons. The creation of this instrument would strengthen Article VI of the NPT, stigmatize nuclear weapons, broaden the disarmament fora and would bring democracy to disarmament.

A prohibition treaty would reorient “the locus of power in nuclear disarmament diplomacy away from the agency of nuclear-armed states, their relationships with each other, and their capacities to resist changes to their nuclear arsenals, doctrines and postures” said Nick Ritchie, from the University of York, on Wednesday, May 11. Wildfire believes that creating this instrument would allow states to look Setsuko Thurlow in the eyes and say that they did everything they could. 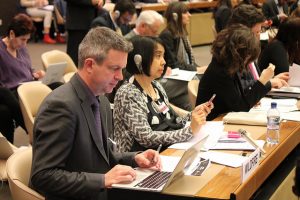 Sadly, some countries missed Wildfire’s mark. On Thursday, Belgium stated that “my country, at this point in time, cannot subscribe itself to the statement that nuclear weapons should never be used under any circumstances.” Many other states claimed that their national security was predicated on their nuclear umbrella.

On Wednesday, Germany claimed that the status quo has created a reduction in the number of nuclear warheads by 80% since their Cold War height. But today there are still over 15,000 nuclear weapons, each with the potential to eviscerate entire cities in seconds. Further, the world is entering a new arms race.

Russia is also engaged in strategic nuclear modernization. Russia is acquiring eight Borei-class ballistic missile submarines, modernizing its TU-160 Blackjack bombers and is half way through a decade long plan to produce over four hundred ICBMs and SLBMs.

Similarly, India and Pakistan are developing a sea-based leg of their nuclear arsenals. China is seeking assured retaliation through modernization and North Korea is testing and advancing its own nuclear capabilities.

The Progressive Approach did not stop these developments.But there is good news.The OEWG ended with clear majority support of a ban on nuclear weapons. On Friday, Palau stated that a prohibition treaty has reached a “critical mass.” Novel approaches like a prohibition treaty are necessary to turn the tide of modernization.

A prohibition on nuclear weapons should be seen as an utmost priority. Stigmatizing nuclear weapons would bolster the existing nuclear disarmament regime. It could serve as a crucial compliment to the NPT and future negotiations for a CTBT and FMCT.  A prohibition treaty would be a substantial next step towards a world free of the nuclear threat.